This is a test page for Google Adsense

Arms Control Now
The following articles and essays provide additional insight into current developments and issues which our staff and experts are following.

Inside the Arms Control Association
Our monthly member newsletter offers members and supporters added insight into the work of the Association's staff and leadership.

The North Korea Denuclearization Digest
This periodic newsletter will provide readers with updates and analyses on diplomatic and denuclearization efforts on the Korean peninsula.

The U.S.-Russian Nuclear Arms Control Watch
This occassional publication will track and analyze the latest developments surrounding U.S.-Russian arms control and strategic stability, including new on negotiations and the status of key agreements.

The P4+1 and Iran Nuclear Deal Alert
This regular alert provides news and analysis on the negotiations and implementation of the Joint Comprehensive Plan of Action between parties to the nuclear deal.

Published Op-eds
The opinion pieces and editorials authored by Arms Control Association staff and leadership and published in major U.S. and international media.

About the Arms Control Association 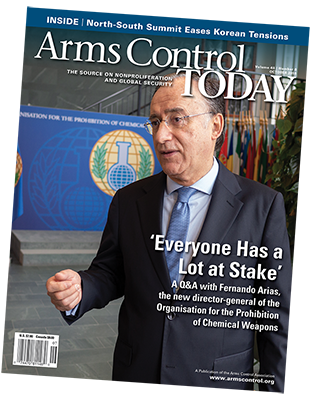 The Arms Control Association, founded in 1971, is a national nonpartisan membership organization dedicated to promoting public understanding of and support for effective arms control policies.

Get the Latest News and Analyses

Vote for the Arms Control Person(s) of the Year

Since 2007, the Arms Control Association's staff and board of directors have nominated individuals and institutions that have advanced effective arms control, nonproliferation, and disarmament solutions or raised awareness of the threats posed by mass casualty weapons. Last year, more than 2,500 individuals from over 90 countries voted for the 2017 ACPOY (see previous winners here.), the highest number of votes from the widest range of countries in the 10-year history of the contest.

It is the Arms Control Association's policy not to share, trade or sell the personal information of our members, donors, or subscribers without their express written permission. The Arms Control Association will use the information you provide to be in touch with you and to provide updates, subscription materials, direct mail, and marketing. By reading content on this site or continuing as a subscriber, you are opting in to receive such content.

(Washington, DC) -- Nine U.S. and international leaders and groups have been nominated this year for efforts in 2017 on nonproliferation and disarmament or for raising public awareness of the threats posed by mass casualty weapons.

Nominees for the Arms Control Person(s) of the Year are made by the staff and board of the nonpartisan Arms Control Association, which has recognized such efforts annually since 2007.

This year nominees include:

"Each of this year’s nominees have, in their own way, provided leadership to help reduce weapons-related security threats," noted Daryl Kimball, executive director of the Arms Control Association.

The winner will be selected by the public through online voting on the Association's website (https://www.armscontrol.org/acpoy) from December 8, 2017 until January 5, 2018. Nominees and their supporters are invited and encouraged to "campaign" for the award. Many have already started doing so via their social media profiles, using the hashtag #ACPOY17 to draw attention to their nomination.

Nine U.S. and international leaders and groups have been nominated this year for efforts in 2017 on nonproliferation and disarmament or for raising public awareness of the threats posed by mass casualty weapons.