“It will take all of us working together – government officials, and diplomats, academic experts, and scientists, activists, and organizers – to come up with new and innovative approaches to strengthen transparency and predictability, reduce risk, and forge the next generation of arms control agreements.”
– Wendy Sherman
U.S. Deputy Secretary of State
June 2, 2022
Can Biden ‘Build Back Better’ on Arms Control?

President-elect Joe Biden possesses a strong personal commitment to effective nuclear arms control, nonproliferation, and disarmament that dates back to his early days in the Senate.

In 1979, during the height of the Cold War, then-Sen. Biden spoke at the Arms Control Association Annual Dinner about “The Necessity of Nuclear Arms Control,” noting that “pursuing arms control is not a luxury or a sign of weakness, but an international responsibility and a national necessity.”

He wrote a feature article for Arms Control Today in 1986 titled “The Five Myths of Reagan Arms Control,” criticizing the administration for its lack of progress at the bargaining table with the Soviets and he proposed concrete solutions.

In a Jan. 2017 address, then vice president Biden said: “As a nation, I believe we must keep pursuing the peace and security of a world without nuclear weapons—because that is the only surety we have against the nightmare scenario becoming reality.”

Even as the nuclear danger looms, Biden and his team must also address several other huge challenges in their first days in office, such as the Covid-19 pandemic, securing an economic stimulus package, improving health care, pursuing racial justice, and combating climate change.

You can count on the Arms Control Association be working hard press for smart and swift presidential action and congressional support for the critical, early first steps that are needed to reduce the nuclear danger, including:

What follows is a snapshot of some of our recent work. We appreciate your support.

A Message to the Transition Team from the Disarmament Community

Arms Control Association executive director Daryl Kimball and Board Chair Tom Countryman, along with leaders representing more than two dozen U.S. nuclear disarmament and environmental organizations have written to the President-elect Biden’s transition team to outline “several key steps in the areas of nuclear arms control, policy, budget and multilateral diplomacy that we believe the new administration can and should pursue to restore American leadership to reduce nuclear weapons dangers.”

Our Nov. 19 memo--and specifically our message about the need to extend New START--was the subject of a Dec. 1 Reuters news report “Biden urged to extend U.S.-Russia arms treaty for full 5 years without conditions.”

On these and other issues, our senior policy team, including Kimball, Kingston Reif, and Kelsey Davenport, have briefed key transition team members on what we see as some of the key challenges and opportunities in the weeks and months ahead.

After having to postpone our April 2020 annual meeting due to the pandemic, the Association held its first-ever virtual annual meeting Dec. 1. Through the course of the day, we had over 850 attendees from 60+ countries—it was truly a global gathering to examine today’s tough global weapons-related security challenges.

If you would like to watch any of the sessions, you can view them at your convenience by visiting the 2020 Annual Meeting page on our website or our official YouTube channel.

We want to especially thank our Ambassador- and Leadership-level sponsors for the annual meeting, Paul F. Walker, Ph.D., and Dr. Joe Hogler, as well as our many Partner- and Advocate-level sponsors whom you can find listed here.

The Next Generation: ACA’s Internship Program

The Arms Control Association has a long history of providing young professionals with a start in the field. Some past ACA interns include Wade Boese, who went on to become our research director and is now with the U.S. State Department; Monica Montgomery who is now a rising star analyst with the Center for Arms Control and Nonproliferation; Rhianna Tyson Kreger, now the communications director for the James Martin Center for Nonproliferation Studies, and George Stephanopolous … yes, that guy who is now the host of ABC News’ This Week.

We are working to strengthen our program and offer internship opportunities to a more diverse set of students and recent graduates with the goal of supporting the next generation of leaders and innovators in arms control.

We’re now inviting applications for our Winter/Spring internships, which will be on a part-time, virtual, paid basis as we all continue to navigate through the pandemic and continue teleworking.

Applications are due by Jan. 5 and details are online here: https://www.armscontrol.org/internships

Established in honor of Herbert J. Scoville, the president of the Arms Control Association from 1979 to 1985, the fellowship provides young professionals with the opportunity to gain experience working on arms control, conflict resolution, peace, and international security issues. See www.scoville.org for more information. 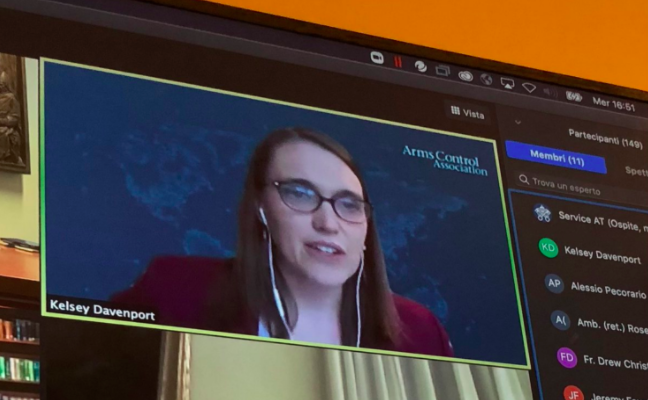 Director for nonproliferation policy Kelsey Davenport joined a Dec. 16 virtual discussion sponsored by the Vatican's Dicastery for Promoting Integral Human Development to inspire diplomatic action toward the abolition of nuclear weapons. This virtual symposium follows Pope Francis’ rejection of nuclear deterrence as morally unacceptable at a historic Vatican conference in 2017.

The entire session is available online via the Vatican News YouTube channel: https://www.youtube.com/watch?v=1c4-xI3uOtc.

The Arms Control Association in the News