– Vincent Intondi
Professor of History, Montgomery College
July 1, 2020
Biden and Putin Summit: A Chance to Move Back from the Brink

This week’s summit meeting in Geneva is a pivotal opportunity for the leaders of the world’s two largest nuclear weapons possessors to reduce the growing risk of nuclear conflict and get back on track to reduce their bloated nuclear stockpiles. 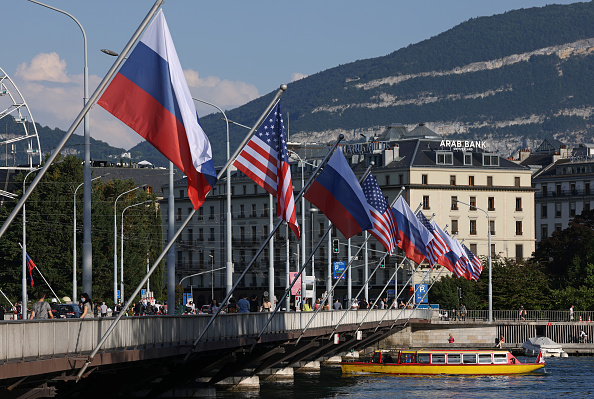 For months and weeks, we’ve been working hard to highlight and explain what can be done on strategic stability and arms control and to build political support for meaningful post-summit follow-through actions by President Biden and President Putin.

Last week, our board chair Tom Countryman and I met with NSC staff at the White House and delivered a joint appeal organized by the Pugwash Conference, the International Physicians for the Prevention of Nuclear War (IPPNW), and ACA calling on Biden and Putin to:

Commit to a bilateral strategic dialogue that is regular, frequent, comprehensive and result-oriented leading to further reduction of the nuclear risk hanging over the world and to the re-discovery of the road to a world free of nuclear weapons."

Along with a handful of fellow NGO leaders who we invited to join us, we also made the case for the two presidents to reaffirm the ground-breaking statement issued by Gorbachev and Reagan in 1985 that "a nuclear war cannot be won and must never be fought."

The U.S.-German-Russian "Deep Cuts Commission" (for which ACA is the U.S. lead-partner) also issued detailed recommendations on specific nuclear risk reduction and arms control steps for this week’s NATO summit in Brussels and the Biden-Putin encounter in Geneva.

As I outlined in my two most recent Focus editorials in Arms Control Today, the extension of the New START agreement is a necessary but insufficient measure. Further action is needed to slow the arms race and get the nuclear disarmament process back on track. (See: "Next Steps for Biden and Putin" and "Engage on Arms Control with China? Yes, and Here’s How.")

While renewed U.S. nuclear strategic stability talks can be helpful, they must amount to more than exchanges of grievances and become, as President Biden said in April, a launching point "to pursue cooperation in arms control and security." With the last remaining bilateral nuclear arms control treaty (New START) expiring in four-and-a-half years, there is no time to waste.

Sustaining progress on disarmament is not luxury. It is necessary for human survival.

We are very disappointed but not surprised about the Biden administration's fiscal year 2022 budget request, which calls for spending at Trump-era levels and includes some new nuclear weapons projects that Biden suggested he would oppose when he was a presidential candidate.

In total, Biden is requesting $43.2 billion for nuclear weapons, a slight decrease from the $44.2 billion appropriated in fiscal year 2021. This even includes $15.2 million funding for a new nuclear-armed, sea-launched cruise missile program that was started under Trump. Biden said during the campaign in 2019 that "The United States does not need new nuclear weapons. Our current arsenal of weapons … is sufficient to meet our deterrence and alliance requirements."

On May 17, we hosted a press briefing on the issue ahead of the budget rollout titled "Smarter Options on U.S. Nuclear Modernization" with comments from Rep. John Garamendi (D-Calif.) and others. 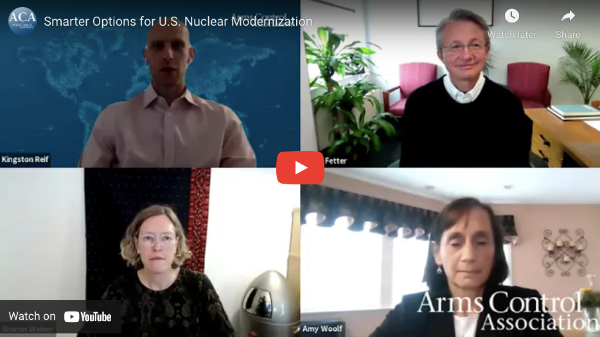 In recent weeks, we have been busy with press and Hill outreach pressing the argument that Congress and Biden should adopt a nuclear weapons budget that supports a "More Cost Effective, Stabilizing, Saner Nuclear Strategy."

We’ll be pushing for common-sense adjustments to the budget when Congress marks up this year’s annual appropriations and defense authorization bills. We will also work with allies to push hard for changes that better align with President Biden’s stated goals to reduce the role and the cost of nuclear weapons.

Disarmament policy director Kingston Reif will report in detail on the budget debate in the forthcoming issue of Arms Control Today. In the meantime, see the Politico article, "Biden goes ‘full steam ahead’ on Trump’s nuclear expansion despite campaign rhetoric," which summarizes the critical reaction from the arms control and disarmament community.

Our research team, led by nonproliferation policy director Kelsey Davenport, has been closely tracking the ongoing talks in Geneva and we have been working to build political support for a prompt mutual return to compliance by the United States and Iran with the 2015 deal, known as the Joint Comprehensive Plan of Action (JCPOA).

As this May 4 op-ed by Tom Countryman and this letter-to-the-editor by Daryl Kimball show, our team has been very engaged in ensuring that members of Congress understand why the first step toward curtailing Iran’s nuclear, missile, and regional behavior is a prompt mutual return to the 2015 nuclear deal

As we reported in the latest issue of Arms Control Today, we are hoping for the finalization of an understanding on JCPOA compliance shortly after the Iranian presidential elections on June 17.

To stay up to date on the latest developments, check out the next issue of Arms Control Today and be sure you are subscribed to our "P4+1 and Iran Nuclear Deal Alert" —which we hope to be able to rename the "P5+1 and Iran ... Alert" very soon. 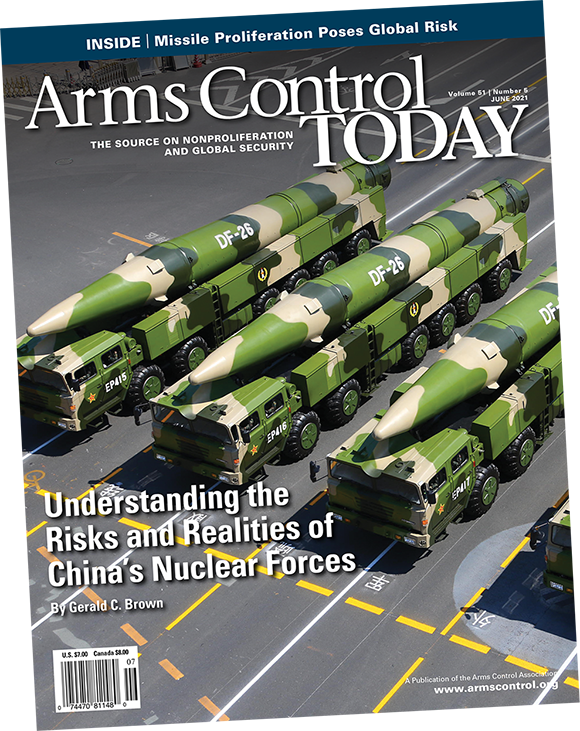 As you may have noticed, the U.S. Postal Service has been experiencing service delays exacerbated by COVID-19 and administrative changes. We apologize for any delays in your receiving Arms Control Today by mail.

We are working to address the recent postal delivery delays on our end as best we can.

If you are a member or subscriber and are not receiving your print issues in a timely manner, please visit our website where you can access the digital edition of the journal as it appears in print (in a PDF file) as soon as it is available. 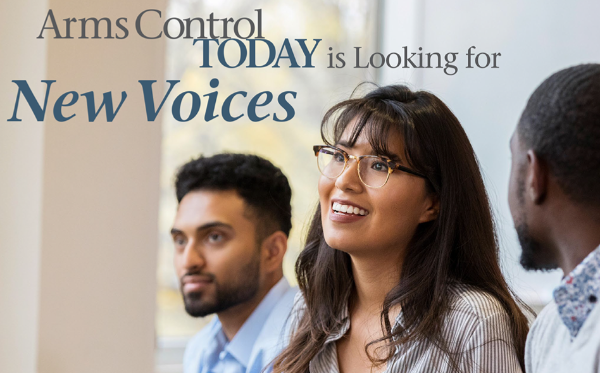 As weapons-related dangers evolve and expand, a new generation of thinkers and doers is needed to help develop new ideas and solutions to eradicate the threat, now and in the years ahead.

Our editors are looking for people with ideas who are thirty-five or under and have never been published in Arms Control Today to consider contributing to our new, bi-monthly "New Voices" feature.

We are looking for younger scholars, think tank analysts, activists, government officials, and other experts with fresh ways of looking at problems, and constructive solutions that can inspire ordinary people and their leaders to recommit themselves to the disarmament path. Women and people of color, who have been traditionally underrepresented in national security debates, are especially encouraged to submit proposals.

"New Voices" submissions should be in the 1,000–2,000 word-range. Detailed guidelines are on our Submissions page.

This summer, we are excited to host Hollis Rammer as our policy and communications intern and Lillian Mauldin as our intern working with ACA’s Forum on the Arms Trade project. 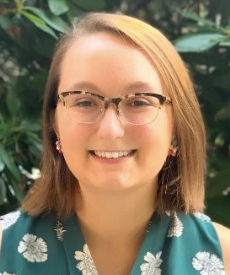 Hollis is currently pursuing a MA in Nonproliferation and Terrorism Studies at the Middlebury Institute of International Studies in Monterey, California is a graduate research assistant at the James Martin Center for Nonproliferation Studies. She graduated from Wellesley College in May of 2020, where she studied Political Science and Russian Area Studies. 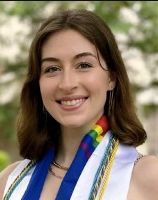 Lillian is a graduate of the University of Texas at Austin. She holds a BA in Honors International Relations and Global Studies with a minor in Arabic, and is a founding member of Women for Weapons Trade Transparency.

For more information on our paid internship opportunities, visit our Internships page.

With the support of a major renewal grant from Global Affairs Canada for our Chemical Weapons Coalition project (CWCC) for 2021-2022, we have new resources to bolster the programming and outreach activities, which are designed to facilitate civil society involvement on the issue and to help reinforce implementation and compliance with the treaty.

This month the project’s new research assistant, Leanne Quinn, relaunched the CWCC website and started a new network e-newsletter to help foster better communication and coordination within the global network of NGOS that are part of the coalition.

Last month, ACA and the CWCC hosted a special Zoom briefing on reinforcing the taboo against chemical weapons on May 10 featuring OPCW Director-General Fernando Arias, which you can find here on the CWCC web site.