The 46th President of the United States, Joe Biden, already faces a daunting array of challenges left behind by his predecessor—including major decisions to reduce the threat of nuclear weapons and proliferation that require prompt action.

Biden’s national and foreign policy team, along with the new Congress, have an opportunity and a responsibility to restore U.S. global leadership to reduce the threats posed by the world’s most dangerous weapons.

Our new Arms Control Association report, Nuclear Challenges for the Biden Administration in the First 100 Days, written by our senior policy staff diagnoses the problems ahead and delivers a pragmatic prescription for action by the new Biden administration.

The early signs coming out of the White House are good.

On Biden’s first full day in office, senior administration officials told The Washington Post that the president would seek a five-year extension of the New START agreement, which would have otherwise expired Feb. 5.

As I noted in the Post report: “A straightforward five-year extension would provide the new president with an early win and positive momentum, help restore U.S. credibility on arms control issues, and create the potential for more ambitious steps to reduce the nuclear danger and move us closer to a world without nuclear weapons.”

There is certainly much more to be done in the weeks and months ahead. You can count on us: we are rolling up our sleeves and getting to work to put U.S. arms control policy back on track. 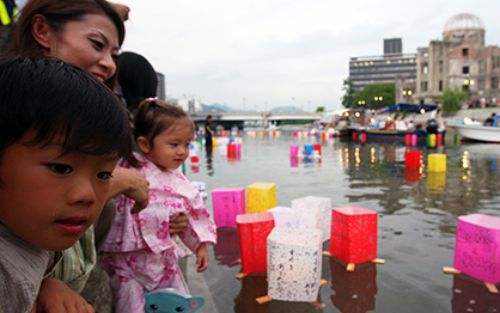 From Jan. 22, 2021, nuclear weapons development, production, possession, use, threat of use, and stationing of another country’s nuclear weapons on a state-party's national territory are all expressly prohibited by a global agreement: the Treaty on the Prohibition of Nuclear Weapons (TPNW).

The Arms Control Association welcomes the entry into force of the TPNW as a historic turning point in the long struggle to prevent nuclear war and create a world free of nuclear weapons.

As Daryl Kimball wrote in an op-ed in Kyodo News, “The new treaty is a much-needed wake-up call that strengthens the international norm against nuclear weapons. It is consistent with the decades-long plea of the Hibakusha that never again should anyone experience ‘nuclear hell on earth.’”

While the TPNW will not immediately eliminate any nuclear weapons, the treaty further delegitimizes nuclear weapons and strengthens the legal and political norm against their possession and use. Hopefully, the treaty will compel renewed action by nuclear-weapon states to fulfill their commitment to the complete elimination of nuclear weapons.

In our press statement, ACA Board Chair and former acting Under Secretary of State for Arms Control and International Security Tom Countryman urged the incoming Biden administration:

“... to avoid the Trump administration’s misguided criticism of the TPNW as a threat to the NPT” and to instead “make it clear that the United States views the TPNW as a good faith effort by the majority of the world’s nations to fulfill their own NPT-related disarmament obligations and help build the legal framework for the eventual elimination of nuclear weapons.”

Sometime in early 2022, a meeting of TPNW states parties (now in excess of 50) as well as nongovernmental representatives including ACA, will gather for the first time to discuss and evaluate how to operationalize the treaty, which also requires states to provide assistance to those affected by nuclear weapons use and testing.

With just days to go before the expiration of the last remaining treaty limiting the two largest nuclear arsenals Feb. 5, President Joe Biden and President Vladimir Putin agreed this week to a clean, five-year extension of the New Strategic Arms Reduction Treaty (New START), as allowed for by the treaty.

New START extension, though common sense, has been far from certain. For several years, the Arms Control Association has led the NGO campaign in the United States to make the case for the treaty and, in the absence of a replacement treaty, for its extension.

As our research associate Shannon Bugos explained in the Bulletin of the Atomic Scientists, the rapid action this week to extend New START follows years of delay followed by ham-handed efforts by the Trump administration to press Russia to accept new conditions on New START and to cajole China into trilateral arms control talks.

As Daryl Kimball told the Associated Press on Jan. 26, “New START extension should be just the beginning and not the end of U.S. and Russian nuclear disarmament diplomacy. Both countries have a special responsibility and a national interest in reducing their bloated, costly, and deadly nuclear stockpiles.”

In the coming weeks and months, we’ll continue to work with our coalition partners, allies on Capitol Hill, and with like-minded experts in Europe and Russia to press for serious follow-on negotiations on new agreements to reduce the still looming nuclear danger. See our “First 100 Days and Beyond Nuclear Challenges” report for further details. 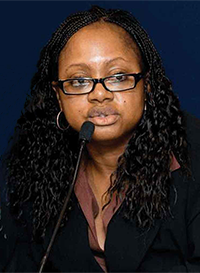 The Biden administration has put forward an impressive set of nominees for key arms control and foreign policy positions. Our board chair Tom Countryman said in a story on NPR’s Weekend Edition about how some diplomats who were forced out or quit in protest during the Trump administration are now returning, “I'm happy that their hard work and their patriotism will again be respected rather than denigrated by the White House.”

Among the nominees to senior positions is Amb. Bonnie Jenkins, who is a member of the ACA board of directors and veteran diplomat. She has been tapped by President Biden to serve as the new U.S. Under Secretary of State for Arms Control and International Security Affairs.

Jenkins, and the organization she founded, Women of Color Advancing Peace and Security, were voted as 2020 Arms Control Persons of the Year for catalyzing support for and action from leaders and practitioners in the national security and foreign policy communities to increase diversity into their ranks and pursue concrete steps to root out institutional racism in the governmental and nongovernmental sectors of the field.

We are very grateful for the very generous response from our members and individual donors to our end-of-the-year appeal for financial support.

From the last quarter of 2020 to date, you all responded with contributions totaling more than $100,000, which will help us fuel our ambitious program of work in the year ahead!

In our new report, we describe the five most important sets of nuclear weapons policy challenges and decisions that the new Biden administration will need to address, along with recommendations for: 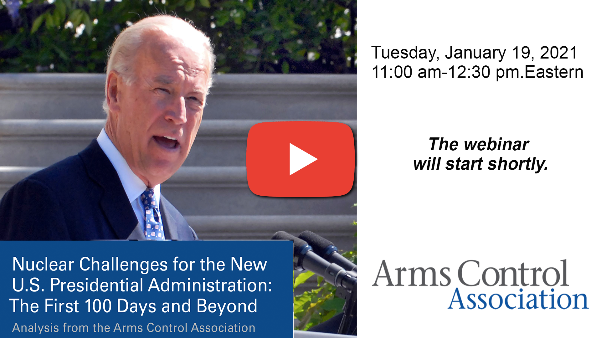 If pursued, these actions and decisions would make the United States and the world safer from the threats posed by nuclear weapons. These initial steps would also put the administration in a better position to pursue more lasting and far-reaching nuclear risk reduction and elimination initiatives over the next four years.

A recording of our Jan. 19 virtual briefing on the report is available at ArmsControl.org/Events or on our official YouTube channel.

"Restoration of the JCPOA’s nuclear restrictions and its economic benefits for Iran stands the best chance of blocking Iran’s potential pathways to nuclear weapons, providing incentive and encouragement not to do so, and creating space for further diplomacy,” the experts conclude.

Signatories of the joint statement include former IAEA Director-General Hans Blix, two former special representatives to the president of the United States on nonproliferation, and several former high-level officials from the National Security Council, the National Intelligence Council, and the State Department, among other agencies.