Upon taking office, the new presidential administration of Joseph Biden will confront a dizzying array of major challenges, not the least of which are related to the risks posed by the world’s most dangerous weapons. Tensions between the world’s nuclear-armed states are rising; the risk of nuclear use is growing; billions of dollars are being spent to replace and upgrade nuclear weapons; and key agreements that have kept nuclear competition in check are gone or are in serious jeopardy.

The situation has been complicated by the neglect and poor policy choices of President Donald Trump and his administration. Over the past four years the Trump administration made nearly every nuclear policy challenge facing the United States worse.

Fortunately, Biden has a long and distinguished track record when it comes to dealing with nuclear weapons-related security issues. Unlike his predecessor, Biden possesses a strong personal commitment to effective nuclear arms control, nonproliferation, and disarmament that dates back to his early days in the Senate and continued through his last days as vice-president under President Barack Obama.

In this analysis we have outlined what we believe to be the five most important sets of nuclear weapons policy challenges and decisions that the new Biden administration will need to address in its first 100 days and beyond, along with recommendations for effectively dealing with each of these policy challenges:

If pursued, these actions and decisions would make the United States and the world safer from the threats posed by nuclear weapons. These initial steps would also put the administration in a better position to pursue more lasting and far-reaching nuclear risk reduction and elimination initiatives over the next four years. 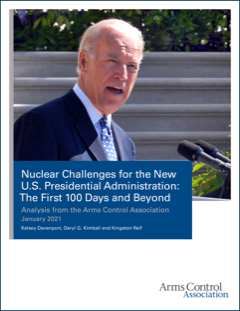