Authored by Kingston Reif and Shannon Bugos on July 30, 2021

The United States and Russia restarted in July a bilateral dialogue to discuss strategic stability and the future of arms control and agreed to meet again in late September.

U.S. President Joe Biden and Russian President Vladimir Putin agreed to relaunch the dialogue during their June summit to begin what will likely be a long, contentious process to make progress on nuclear arms control before the last remaining arms control agreement between the two countries expires in under five years.

The Russian Foreign Ministry commented in a July 28 statement that the two countries held “a comprehensive discussion of the sides’ approaches to maintaining strategic stability, the prospects for arms control, and measures to reduce risks.”

“We have significant differences on key issues,” said Russian Deputy Foreign Minister Sergey Ryabkov after the talks concluded. “But there are also points of convergence, and we intend to capitalize on them.”

In the weeks ahead of the dialogue, multiple Russian officials called for the first task of the dialogue to be conducting “a joint review of each other’s security concerns,” given the differing priorities between Washington and Moscow on strategic stability.

This was the first round of the bilateral U.S.-Russian strategic stability dialogue under the Biden administration and since the two countries extended the 2010 New Strategic Arms Reduction Treaty (New START) in February until 2026. The Trump administration held multiple rounds of the dialogue between September 2017 and August 2020 in the lead-up to New START’s initial scheduled expiration in February 2021.

A key goal of the dialogue will be to “lay the groundwork for future arms control and risk reduction measures,” according to the joint U.S.-Russian presidential statement from the June 16 summit in Geneva.

Biden told reporters after meeting with Putin that the strategic security dialogue should show results in a matter of months. “We’ll find out within the next six months to a year whether or not we actually have a strategic dialogue that matters,” he said. —KINGSTON REIF, director for disarmament and threat reduction policy, and SHANNON BUGOS, research associate

The United States and Russia will meet informally before the next planned strategic stability dialogue in September “with the aim of determining topics for expert working groups at the second plenary,” said State Department Spokesperson Ned Price July 28.

“This focused approach has been used repeatedly in strategic stability consultations in the past,” noted Russian Ambassador to the United States Anatoly Antonov July 29. “It has proven to be effective in situations where the parties need to discuss a wide range of issues—and not superficially.”

The number and the topics for the working groups remain to be decided. Last year, the two countries formed three strategic stability working groups on nuclear warheads and doctrine, verification, and space systems.

A senior State Department official remarked told reporters after the dialogue that, in addition to arms control, the two sides also touched on issues related to space and the strategic implications of artificial intelligence and cyber policy, which perhaps suggests possible subject matters for the groups. Rose Gottemoeller, the chief U.S. negotiator for New START, told Defense One that some topics could be missile defense, new and emerging technologies such as hypersonic glide vehicles, and the framework for a successor agreement to New START.

Washington and Moscow have different priorities when it comes to strategic stability, which will influence how the two countries determine the topics that are a top focus, open for discussion, and therefore able to be mutually agreed upon to address in a working group.

For the United States, the Biden administration has expressed its desire to address Russian nonstrategic nuclear weapons and new nuclear delivery systems, as well as to bring China into the arms control process.

Beijing repeatedly rejected calls by the Trump administration to join trilateral talks with Washington and Moscow but has expressed a willingness to engage in arms control talks in settings such as a meeting with the five nuclear-weapon states or in a bilateral dialogue.

Russia, meanwhile, has focused on developing “a new security equation” that addresses all nuclear and non-nuclear, offensive, and defensive weapons that affect strategic stability. This would include U.S. missile defense, which Washington has long resisted putting on the table for discussion.

The State Department official noted that the Russian delegation did bring up U.S. missile defense during the dialogue and that the U.S. delegation responded by arguing that those defense systems are meant to counter threats from Iran and North Korea rather than Russia.

Moscow additionally has suggested the inclusion of not only China in arms control but also France and the United Kingdom and continued to propose a moratorium on the deployment of ground-launched missiles that would have been prohibited under the 1987 Intermediate-Range Nuclear Forces (INF) Treaty.

While separate from any formal negotiations on an arms control agreement or arrangement to follow New START, the strategic stability dialogue and its corresponding working groups could help set the foundation for those formal talks in the future.

New START, signed in 2010, caps the U.S. and Russian strategic nuclear arsenals at 1,550 deployed warheads and 700 deployed delivery vehicles and heavy bombers each. Ryabkov noted June 25 that the two countries are working on restarting the inspections conducted under the treaty, which have been paused since March 2020 due to the coronavirus pandemic, but “there are no agreements yet.”

The Biden administration made progress in July toward filling key arms control posts at the State Department.

Ambassador Bonnie Jenkins was sworn in July 25 as undersecretary of state for arms control and international security, just days before the start of the strategic stability talks with Russia in Geneva.

“I am committed to reduce the risk of nuclear war by effective arms control, limit Russian and [Chinese] nuclear expansion, strengthen biosecurity, and pursue accountability for the use of chemical weapons,” she tweeted following her swearing-in.

The Senate confirmed Jenkins July 21 by a vote of 52-48. Biden had nominated Jenkins for the post in March.

Jenkins, a board member of the Arms Control Association and former coordinator for threat reduction programs at the State Department under the Obama administration, will be overseeing bilateral talks with Russia on strategic stability and nuclear arms control, as well as guiding the U.S. strategy for the upcoming 10th review conference for the nuclear Nonproliferation Treaty.

In addition, Biden nominated Mallory Stewart July 2 to become assistant secretary of state for arms control, verification, and compliance, which is a position that reports to Jenkins. Stewart is currently a special assistant to the president and senior director for arms control, disarmament, and nonproliferation on the National Security Council. She previously served as deputy assistant secretary of state for emerging security challenges and defense policy during President Barack Obama’s second term.

Stewart’s confirmation hearing before the Senate Foreign Relations Committee has yet to be scheduled.

The remaining members of the 1992 Open Skies Treaty are moving forward with determining how the treaty will function following the withdrawal of Russia in December.

Canada and Hungary, the treaty depositaries, convened the states-parties for a videoconference July 20 to discuss Russia’s announcement in June that it will withdraw from the accord December 18. The conference brought together 183 representatives from the 33 states-parties, according to a statement by the Organization for Security and Co-operation in Europe (OSCE).

The representatives discussed “the overall impact on operational functionality of the Treaty, the impact on the allocation of observation quotas and on financial arrangements within the Treaty, and other potential effects on the Treaty,” said the OSCE statement. “The discussion was extensive with 28 States Parties to the Treaty offering a broad range of views on several key topics pertaining to the effect of the decision by the Russian Federation to withdraw from the Treaty.”

Russian Deputy Foreign Minister Sergey Ryabkov said in his address to the conference that the U.S. withdrawal in 2020 destroyed “the balance of interests, rights, and obligations of the participants” in the treaty. He reiterated that the states-parties’ refusal to provide written guarantees that they will neither share data collected under the treaty with the United States nor prohibit overflights of U.S. bases in Europe informed Moscow’s decision to leave the accord.

Ryabkov also rejected the call made by the North Atlantic Treaty Organization in its June communiqué for Russia to return to full compliance with the treaty and emphasized that Moscow will not change course. “The train has left,” he said during his closing remarks. “If you were really interested in Russia remaining in the [Open Skies Treaty], you would have acted differently.”

The deputy foreign minister concluded with a warning that if the Open Skies Treaty “is further terminated, the entire blame for such an outcome will also fall on the United States and its allies.”

Other states-parties, such as France and the United Kingdom, expressed at the conference their disappointment with Russia’s withdrawal decision and their intention to remain fully committed to the treaty. German Commissioner for Disarmament and Arms Control Susanne Baumann remarked that “Russia’s withdrawal places significant strain on the Open Skies Treaty” and that “a new approach to conventional arms control is much needed.”

Katarina Kertysova, a policy fellow at the European Leadership Network, encouraged in a July article that the remaining states-parties keep the treaty alive as there is “ongoing value in overflying Ukraine, Georgia, and Bosnia and Herzegovina,” as well as in conducting extraordinary observation flights as seen in Ukraine in 2014. Kertysova also suggested possible ways in which the treaty could be reimagined and expanded, such as by verifying international arms control agreements and extending the geographical scope of the treaty outside of the Euro-Atlantic.

Meanwhile, Alexander Graef, a researcher at the Institute for Peace, Research, and Security Policy in Hamburg, emphasized July 20 that “No amount of national technical means can replace the value of [military-to-military] contacts” provided through the implementation of the Open Skies Treaty.

Entering into force in 2002, the Open Skies Treaty permits each state party to conduct short-notice, unarmed observation flights over the others’ entire territories to collect data on military forces and activities. The Biden administration informed Moscow in May that it would not seek to rejoin the accord after the Trump administration withdrew Washington from the treaty in November 2020. 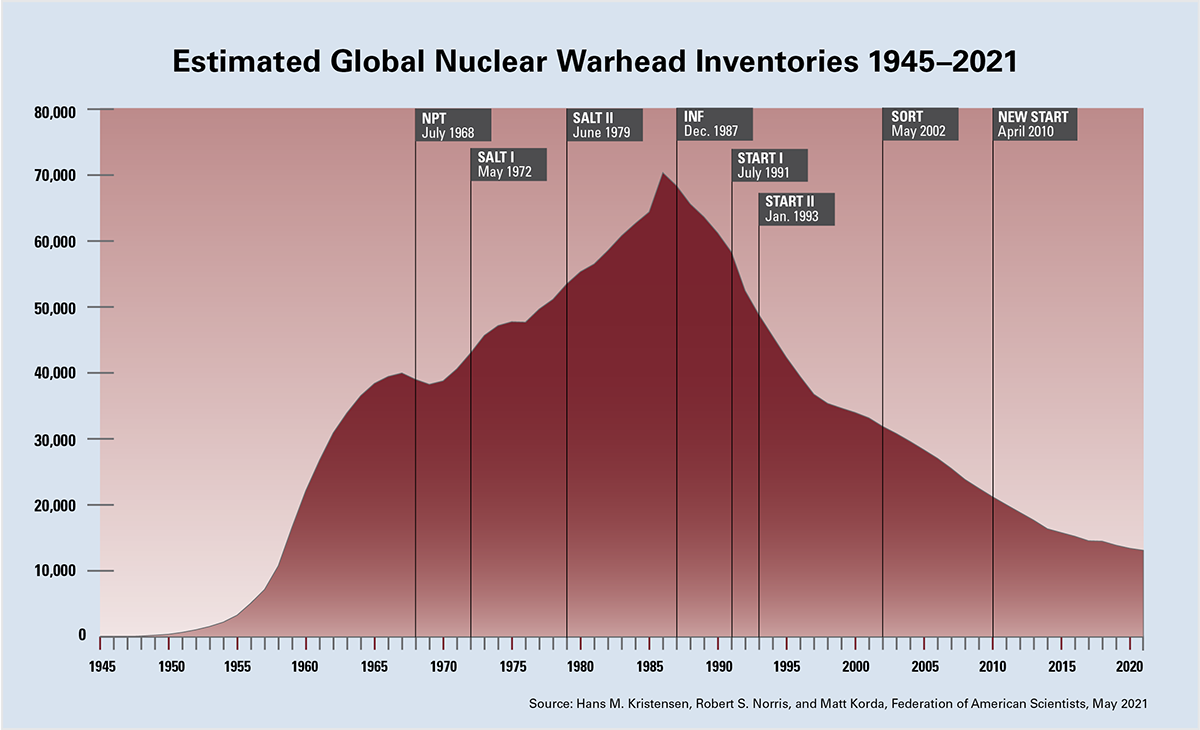 July 31: 30th anniversary of the signing of the Strategic Arms Reduction Treaty

Aug. 6: 76th anniversary of the bombing of Hiroshima

Aug. 9: 76th anniversary of the bombing of Nagasaki