The Trump administration has softened its demand that China immediately participate in trilateral nuclear arms control talks with the United States and Russia and says it is now seeking an interim step: a politically binding framework with Moscow that covers all nuclear warheads, establishes a verification regime suitable to that task, and could include China in the future. 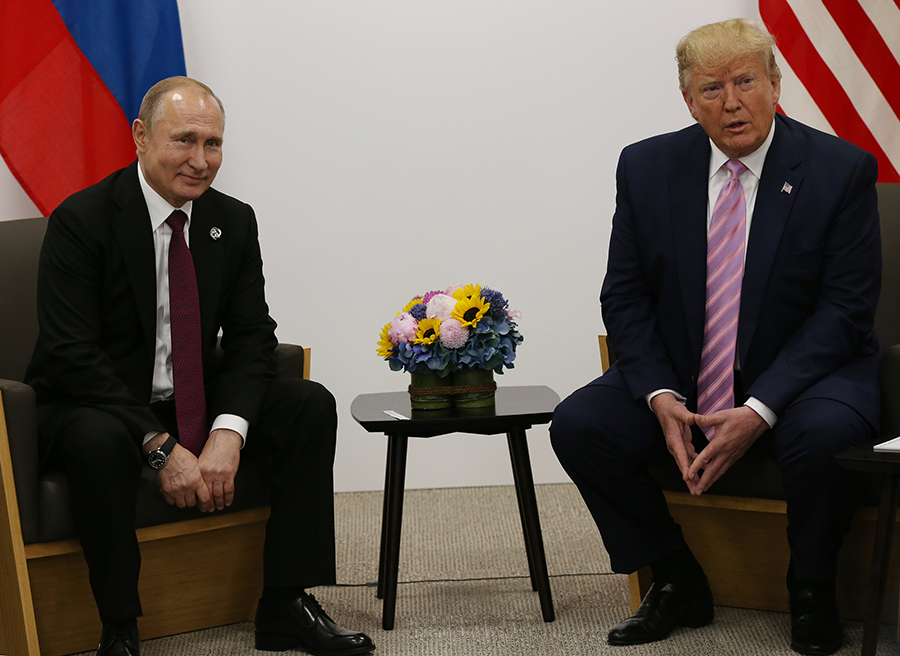 Still, the administration continues to oppose an unconditional five-year extension of the 2010 New Strategic Arms Reduction Treaty (New START) and wants Moscow’s support for limiting all types of U.S. and Russian nuclear warheads and strengthening the New START verification regime as a condition for prolonging the treaty.

Russia supports an unconditional extension and says that it will not agree to any changes to New START.

The impasse continues to cast an ominous shadow over the future of the last remaining arms control agreement limiting the U.S. and Russian nuclear arsenals five months before it is slated to expire.

U.S. Special Presidential Envoy for Arms Control Marshall Billingslea said on Aug. 18, following a round of talks in Vienna with Russian Deputy Foreign Minister Sergey Ryabkov, “that New START is a deeply flawed deal negotiated under the Obama-Biden administration, and it has significant verification deficiencies.”

According to Billingslea, these deficiencies include the absence of sufficient exchanges of missile telemetry and the limited frequency of on-site inspections.

He said that he would recommend that President Donald Trump consider extending the treaty only “if we can fix” the flaws “and if we can address all warheads, and if we do so in a way that is extensible to China.”

“[I]f Russia would like to see that treaty extended, then it’s really on them to come back to us,” he added, citing a mandate from Trump. “The ball is now in Russia’s court.”

Billingslea met with Ryabkov in Vienna from Aug. 17–18. A July 23 call between Trump and Russian President Vladimir Putin, and as working group discussions between U.S. and Russian technical experts later that month, paved the way for the August meeting, according to Billingslea.

The working groups met in Vienna from July 28–30 to discuss issues such as nuclear doctrine, unconstrained nuclear warheads, transparency, and verification.

Trump said on July 30 that the United States is in “formal negotiations with Russia on arms control.” Although the U.S.-Russia discussions this summer have marked the most sustained period of dialogue on arms control issues since the Trump administration took office, they would be more accurately described as the continuation of a longer standing, less concrete dialogue on strategic security.

Billingslea, however, said that the two sides “remain far apart on a number of key issues.”

Ryabkov told the Russian news agency Interfax following his meeting with Billingslea that “any additions” to New START “would be impossible both for political and procedural reasons.”

He added that Russia would not support an “extension at any cost.”

“If the U.S. embellishes its possible…decision in favor of extension with all sorts of preconditions and burdens this work with all possible additional requirements, then I think the problem of extending the treaty won’t be that easy to resolve,” he said.

When Billingslea and Ryabkov last met on June 22 in Vienna, the United States pressured China to join, but Beijing declined and remains strongly opposed to trilateral talks with the United States and Russia. (See ACT, July/August 2020.)

China’s unalterable opposition appears to have convinced the administration that the only hope for progress lies in bilateral engagement with Russia, at least at the outset.

Trump told reporters on July 30 that “China right now is a much lesser nuclear power…than Russia.” He said that he would focus on arms control talks with Russia and then “go to China together.”

Billingslea said in Vienna that “we’re not going to negotiate another bilateral arms control treaty.”

He added that “the framework that we are articulating” with Russia “will be the framework going forward that China will be expected to join.”

The Trump administration has yet to detail its specific objectives for arms control with China, a fact that Russian Foreign Minister Sergey Lavrov emphasized on July 29. “Let them at least document what they have in mind,” he said.

Billingslea claimed that many “countries have already called out the Chinese for their failure to negotiate with us in good faith, and that chorus of calls…would accelerate dramatically once we have created an architecture to control all nuclear weapons.”

Fu Cong, China’s director general of the Department of Arms Control and Disarmament, said on July 8 that “it is unrealistic to expect China to join the two countries in a negotiation aimed at nuclear arms reduction” given the differences in the sizes of nuclear arsenals of three countries. The United States and Russia have about 6,000 total nuclear warheads each, China is believed to have about 300.

Fu also accused the United States of using Beijing’s refusal to join trilateral talks as “a ploy to divert world attention and to create a pretext under which they could walk away” from New START.

Fu added “that China stands ready to discuss all issues related to strategic stability and nuclear risk reduction in the framework of P5, i.e. among China, Russia, U.S., UK, and France.”

Russia continues to say that it will not force China to come to the table and that if a multilateral nuclear agreement is to be negotiated then nuclear-armed France and the United Kingdom must be part of it as well.

Although the Trump administration is now willing to negotiate with Russia before bringing China into talks at a later date, it has not specified what a politically binding framework with Russia should contain and what it would be willing to put on the table to incentivize Russia’s agreement.

Billingslea told Axios on Aug. 20 that Russia raised “a range of issues with U.S. capabilities” in Vienna, but that Moscow’s non-nuclear concerns about for example U.S. missile defenses are not on the table as part of a possible framework deal.

Billingslea has offered few clues about how a new agreement should capture U.S. and Russian nuclear weapons that have never before been limited by arms control, such as shorter-range tactical nuclear warheads and warheads held by each country in reserve.

He hinted, however, that the preferred U.S. approach would not necessarily hinge on counting individual unconstrained warheads.

“What we likely will see is a hybrid approach that would maintain limitations on the strategic systems but which would provide for a method of ensuring that the overall inventory of warheads writ large is static,” he said.