UN Security Council members dismissed the Trump administration’s August attempt to reimpose UN sanctions on Iran, saying that the United States has no standing to do so after Washington’s 2018 withdrawal from the 2015 multilateral nuclear deal that capped Iran’s nuclear activities. 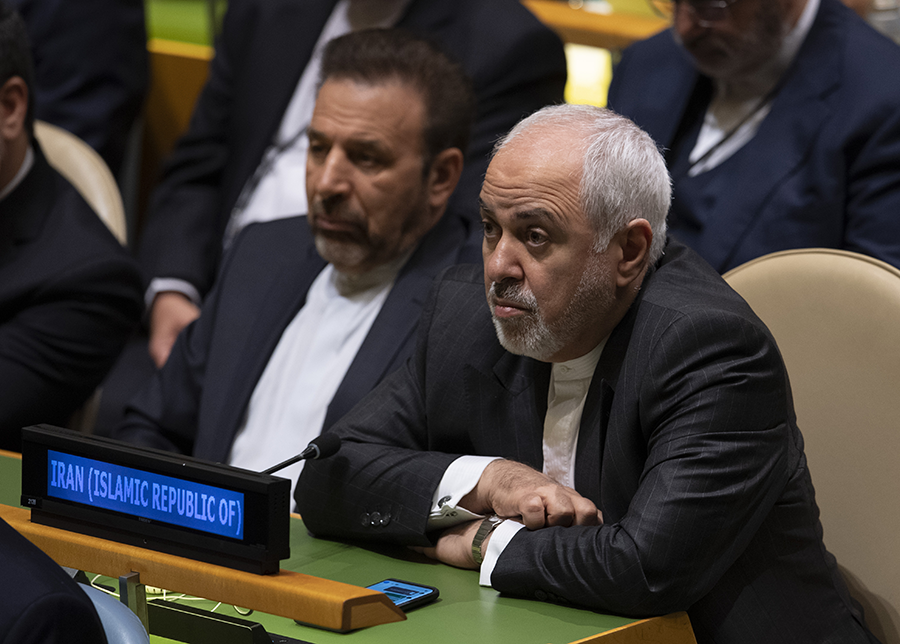 Iran threatened to take action if the Trump administration attempted to snap back UN sanctions, but Tehran might refrain from doing so after a number of council members, including the remaining parties to the nuclear deal, rejected the U.S. move as illegal.

On Aug. 20, U.S. Secretary of State Mike Pompeo notified UN Security Council President Dian Triansyah Djani of Indonesia that the United States was demanding all UN sanctions on Iran be reimposed under a mechanism in the Security Council resolution that supports implementation of the nuclear deal.

Resolution 2231, passed unanimously by the council in July 2015, endorses the nuclear deal, known as the Joint Comprehensive Plan of Action (JCPOA), and modifies UN sanctions on Iran, including an arms embargo that is set to expire in October. It contains a provision that allows participants in the nuclear deal to snap back sanctions on Iran within 30 days if Tehran is not meeting its obligations under the agreement. The provision is written in such a way that the snapback cannot be vetoed.

Iranian Foreign Minister Mohammad Javad Zarif said in an Aug. 20 letter to Djani that “the reckless and unlawful U.S. position disregards well-established rules of international law,” requesting that Djani “refrain from receiving and circulating the inadmissible U.S. notification” on snapback.

The Trump administration notified the Security Council of its intent to snap back sanctions after a U.S. resolution extending the arms embargo on Iran failed to pass the council on Aug. 14. Only the Dominican Republic voted with the United States. Russia and China voted against the resolution. The remaining 11 members abstained, including JCPOA participants France, Germany, and the United Kingdom, who have traditionally supported the United States in security matters.

Pompeo said the council’s failure to pass the resolution is “inexcusable,” whereas Zarif described the vote as “miserable failure of U.S. diplomatic malpractice.”

Pompeo said in an Aug. 20 press briefing that triggering the snapback of UN sanctions is now necessary because the United States will “never allow” Iran to freely buy and sell conventional weapons. He said the United States is confident that the sanctions will come back into effect in 30 days and that “we’re going to do everything we can to enforce them.”

Pompeo cited Iran’s violations of the accord as the rationale for the snapback.

Iran announced in May 2019 that it would “reduce compliance” with its obligations under the JCPOA in response to the U.S. withdrawal and reimposition of sanctions in May 2018.

Iran’s breaches have been well documented by the International Atomic Energy Agency (IAEA), and the European parties to the JCPOA triggered the deal’s dispute resolution mechanism to try and address them in January. However, the remaining parties to the nuclear deal argued that the United States does not have standing to reimpose UN sanctions using Resolution 2231.

In an Aug. 20 letter to Djani, the three European participants in the JCPOA—France, Germany, and the UK, known as the E3—said they do not consider the U.S. notification effective because the United States “ceased to be a JCPOA participant in 2018.”

They argued that the U.S. notification is “incapable of having legal effect” and that any outcome from the U.S. request to snap back “would also be devoid of any legal effect.”

Vassily Nebenzia, Russian ambassador to the United Nations, said on Aug. 20 that Russia “will challenge” the Trump administration because the United States does not have “the legal right or the reason” to initiate snapback.

An Aug. 20 statement from the Chinese Foreign Ministry said that the United States has “no legal ground” to reimpose sanctions, and therefore China does not consider the snapback to have been invoked. The move is “nothing but a political show,” it said.

When U.S. President Donald Trump withdrew from the JCPOA in May 2018, however, he said that the United States is no longer a participant. Then-National Security Advisor John Bolton also dismissed a snapback as an option, noting that the United States is no longer in the JCPOA. He reiterated his opposition to a snapback in a Wall Street Journal commentary on Aug. 16, saying that “[i]t’s too cute by half to say we’re in the nuclear deal for purposes we want but not for those we don’t.”

In May, Iranian President Hassan Rouhani promised a “crushing” response if the arms embargo is extended. Iran views the lifting of the arms embargo as one of the few remaining benefits of staying in the JCPOA.

Yet, at an Aug. 20 press conference, Majid Takht Ravanchi, Iranian ambassador to the UN, appeared to downplay the likelihood of Iran responding by taking further action on its nuclear program. Although he said Iran has legal options on the table to respond to a snapback, he noted that the United States is isolated within the Security Council on this issue and expressed confidence that the U.S. request for reimposition will be rejected.

The E3 did express “serious concerns about the implications for regional security” when the arms embargo expired and said they are ready to work with the Security Council to address those concerns. The E3 sought a compromise solution to the arms embargo issue, but Brian Hook, U.S. special representative for Iran, appeared to rebuff those efforts in June, saying the U.S. position was that the embargo needed to be extended indefinitely.

Pompeo accused the E3 of choosing to “side with ayatollahs” in his Aug. 20 remarks and said their actions “endanger” people in the region and their own citizens.

Trump also turned down a proposal from Russian President Vladimir Putin for a virtual heads-of-state meeting to “in order to outline steps that can prevent confrontation” at the UN and to “facilitate the emergence of reliable mechanisms in the Persian Gulf region for enduring security and confidence building.”

Bloomberg revealed in August that Iran informed the IAEA of its intention to install three cascades of advanced centrifuges at its underground fuel-enrichment facility at the same location.

A July 21 report from the IAEA seen by the Arms Control Association stated that the three cascades in question were being moved from the pilot plant at Natanz. Iran has installed and is operating advanced machines in violation of JCPOA limits, but given that these machines were already enriching uranium, the move does not appear likely to increase the proliferation risk posed by Iran’s nuclear program.