“Your association has taken a significant role in fostering public awareness of nuclear disarmament and has led to its advancement.”
– Kazi Matsui
Mayor of Hiroshima
June 2, 2022
New START at a Glance

The New Strategic Arms Reduction Treaty (New START) was signed April 8, 2010, in Prague by the United States and Russia and entered into force on Feb. 5, 2011. New START replaced the 1991 START I treaty, which expired December 2009, and superseded the 2002 Strategic Offensive Reductions Treaty (SORT), which terminated when New START entered into force.

New START includes a main treaty text with a preamble and sixteen articles; a protocol with definitions, verification procedures, and agreed statements; and technical annexes to the protocol. 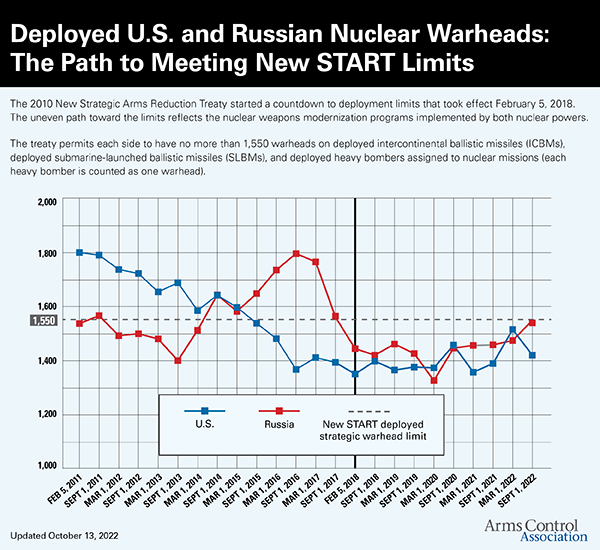 Nuclear warhead limit: Seven years after entry into force (Feb. 5, 2018), New START limits went into effect that capped accountable deployed strategic nuclear warheads and bombs at 1,550, down approximately 30 percent from the 2,200 limit set by SORT and down 74 percent from the START-accountable limit of 6,000.  Each heavy bomber is counted as one warhead (see below).

Missile, bomber and launcher limits: Deployed intercontinental ballistic missiles (ICBMs), submarine-launched ballistic missiles (SLBMs), and heavy bombers assigned to nuclear missions are limited to 700. Deployed and non-deployed ICBM launchers, SLBM launchers, and bombers are limited to 800. This number includes test launchers and bombers and Trident submarines in overhaul and is approximately a 50 percent reduction from the 1,600 launcher-limit set under START (SORT did not cover launchers). The 800 ceiling is intended to limit the ability for “break out” of the treaty by preventing either side from retaining large numbers of non-deployed launchers and bombers.

New START does not limit the number of non-deployed ICBMs and SLBMs, but it does monitor them and provide for continuous information on their locations and on-site inspections to confirm that they are not added to the deployed force. Non-deployed missiles must be located at specified facilities away from deployment sites and labeled with “unique identifiers” to reduce concerns about hidden missile stocks. Moreover, the strategic significance of non-deployed missiles is reduced given that non-deployed launchers are limited. Both sides agreed under the treaty to prohibit systems designed for “rapid reload” of non-deployed missiles (Fifth Agreed Statement).

Force structure: Each side has the flexibility to structure its nuclear forces as it wishes, within the overall limits of the treaty.

Warheads: For deployed ICBMs and SLBMs, the number of warheads counted is the actual number of re-entry vehicles (RVs) on each missile (an RV protects the warhead as it re-enters the atmosphere from space; it can carry only one warhead). START I did not directly count RVs, but instead counted missiles and bombers that were “associated with” a certain number of warheads. New START counts each heavy bomber as one warhead (although the maximum loading is 16-20), the same counting rule that START I used for bombers carrying short-range weapons. Neither side typically deploys nuclear bombs or cruise missiles on bombers but keeps them in storage. Thus, inspections of bombers would find no weapons to inspect. The parties agreed to arbitrarily count each bomber as one warhead. Under SORT, Russia did not count stored bomber weapons at all. New START, like START I, does not track or limit warheads or bombs once they have been removed from deployed launchers.

New START’s verification regime includes relevant parts of START I as well as new provisions to cover items not previously monitored. For example, the new treaty contains detailed definitions of items limited by the treaty; provisions on the use of National Technical Means (NTM); an extensive database on the numbers, types and locations of treaty-limited items and notifications about those items; and inspections to confirm this information. Even so, the verification system has been simplified to make it cheaper and easier to operate than START and to reflect new strategic realities. New START monitoring has also been designed to reflect updated treaty limitations.

For example, the old treaty did not directly limit warheads but instead assigned a certain number of warheads to each launcher; a count of the launchers gave an upper limit on the number of warheads that could be deployed, but not necessarily an actual count. New START includes direct limits on deployed warheads and allows for on-site inspections to give both sides confidence that the limits are being upheld. Under the new treaty, both sides will exchange lists of the number of warheads deployed on individual missiles. During “Type One” inspections, each side can choose one ICBM or SLBM to inspect on short notice and count the warheads. The re-entry vehicles (RVs) can be covered by the host nation to protect sensitive information, but the actual number of RVs must be evident to the inspectors. These inspections are designed to help deter both sides from deploying a missile with more than its declared number of warheads.

For missile-generated flight test data, known as telemetry, START I called for telemetry to be openly shared, with limited exceptions, to monitor missile development. New START does not limit new types of ballistic missiles, and thus the old START formula for extensive telemetry sharing was no longer necessary. New START requires the broadcast of telemetry and exchange of recordings and other information on up to five missile tests per side per year to promote openness and transparency.

Under the new treaty, the United States and Russia will continue to depend on NTM to monitor the other’s strategic forces. To monitor Russian mobile ICBMs, all new missiles are subject to the treaty as soon as they leave a production facility, and each missile and bomber will carry a unique identifier. Russia must notify the United States 48 hours before a new solid-fueled ICBM or SLBM leaves the Votkinsk production facility and when it arrives at its destination, which will facilitate monitoring by national means, such as satellites. The treaty does not prohibit the modernization of strategic forces within the overall treaty limits (Article V).

The missile defense launcher provision is designed to address Russian concerns that the United States could “break out” of New START by placing ICBMs in silos that once held missile defense interceptors. In practice, the provision will protect U.S. missile defense interceptors from falling under the treaty inspection regime. "If the parties were permitted to convert missile defense silos to ICBM silos, they would also have been able to visit and inspect those silos to confirm that they did not hold missiles limited by the treaty,” stated a report by the Congressional Research Service. The ban on silo conversions means that silo inspections are unnecessary and not permitted.

Finally, both sides have made unilateral statements about the relationship between missile defense deployments and the treaty. These statements are not legally binding, and similar statements were issued with previous treaties, including START I. Under START, the Soviet Union said that U.S. withdrawal from the 1972 Anti-Ballistic Missile (ABM) Treaty would constitute reason for withdrawal. However, when the United States actually did withdraw from the ABM Treaty in 2002, Russia did not withdraw from START and, in fact, went on to negotiate SORT.

New START does not prohibit either side from deploying conventional warheads on long-range ballistic missiles. Such deployments would be counted under the warhead and missile limitations of the treaty. The preamble states that both sides are “mindful of the impact of conventionally armed ICBMs and SLBMs on strategic stability.” The State Department stated in a report that “there is no military utility in carrying nuclear-armed and conventionally-armed reentry vehicles on the same ICBM or SLBM.”

The treaty’s duration is ten years from entry into force (Feb. 2021) unless it is superseded by a subsequent agreement and can be extended for an additional five years, until 2026. As in START I, each party can withdraw if it decides for itself that “extraordinary events related to the subject matter of this treaty have jeopardized its supreme interests.” The treaty would terminate three months from a notice of withdrawal.