“It will take all of us working together – government officials, and diplomats, academic experts, and scientists, activists, and organizers – to come up with new and innovative approaches to strengthen transparency and predictability, reduce risk, and forge the next generation of arms control agreements.”
– Wendy Sherman
U.S. Deputy Secretary of State
June 2, 2022
U.S., Russia Agree to Strategic Stability Dialogue 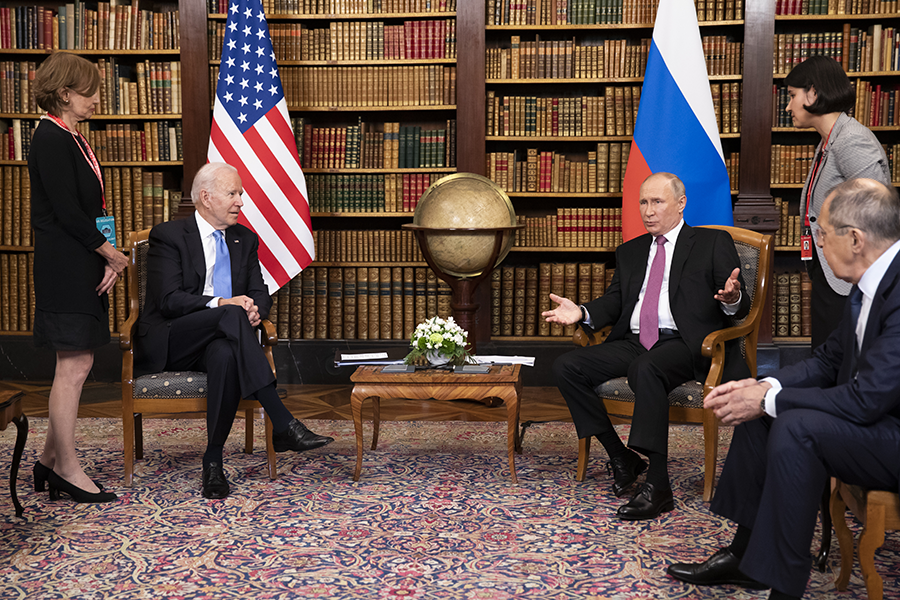 The announcement marked the first step in what could be a long, contentious process to make progress on nuclear arms control after more than a decade of deadlock and before the last remaining arms control agreement expires in five years between the world’s two largest nuclear powers.

In a joint statement released following their June 16 meeting, the two presidents said the strategic stability dialogue their countries planned to initiate would be “integrated,” “deliberate,” and “robust.”

Biden added at a press conference after the summit that the dialogue would “work on a mechanism that can lead to control of new and dangerous and sophisticated weapons that are coming on the scene now that reduce the times of response, that raise the prospects of accidental war.” Biden did not detail what specific weapons systems he has in mind.

He said that “we’ll find out within the next six months to a year whether or not we actually have a strategic dialogue that matters.”

The date and location of the dialogue is not set, but will soon be determined by officials at the U.S. State Department and Russian Foreign Ministry, Putin noted during his postsummit press conference.

On June 22, Russian Deputy Foreign Minister Sergei Ryabkov told the Carnegie International Nuclear Policy Conference that Moscow has proposed as “a first step, a joint review of each other’s security concerns.” The next step, he said, would be to “outline possible ways how to address these concerns,” with the goal being an agreed framework that “will be instrumental for further engagement in actual negotiations on eventual, practical agreements and arrangements.”

A strategic stability dialogue was last held in August 2020 under the Trump administration in the lead-up to the expiration of the 2010 New Strategic Arms Reduction Treaty (New START) in February 2021. (See ACT, September 2020.) But two days before the treaty’s expiration, Biden and Putin agreed to extend New START by five years, until 2026. (See ACT, March 2021.)

But Sen. Jim Risch (R-Idaho), the committee’s ranking member, expressed his disappointment in the outcome of the summit, stating that “Biden made no efforts to address Russia’s Intermediate-Range Nuclear Forces (INF) Treaty violations.” The United States withdrew from the 1987 INF Treaty in 2019, claiming that Russia had violated the treaty by testing and deploying a banned missile system. (See ACT, September 2019.)

The two presidents in their joint statement reaffirmed the 1985 statement by U.S. President Ronald Reagan and Soviet leader Mikhail Gorbachev that “a nuclear war cannot be won and must never be fought.”

Dozens of international nuclear policy experts and former senior government officials encouraged the two presidents to reaffirm the Reagan-Gorbachev principle and announce the resumption of a strategic stability dialogue.

But the United States and Russia appear to have different priorities for the dialogue. U.S. National Security Advisor Jake Sullivan said on June 10 that the administration will aim to discuss “the very complex set of nuclear arms issues that face our two countries,” such as what may come after New START, “how…we deal with the fact that the INF Treaty is no more, [and] how…we deal with our concerns about Russia’s new nuclear systems.” Washington has also previously expressed its desire to address Russian nonstrategic nuclear weapons and bring China into the arms control process.

Sullivan added that “whether additional elements get added to strategic stability talks in the realm of space or cyber[space] or other areas, that’s something to be determined as we go forward.”

As for Russia, Foreign Minister Sergey Lavrov said on June 9 that “anything that affects strategic stability must be discussed during a dialogue,” including “nuclear and non-nuclear and offensive and defensive weapons.” Russia additionally has suggested the inclusion not only of China in arms control but also France and the United Kingdom.

Ryabkov added on June 22 that “[t]he parties may decide to adopt a package of interrelated arrangements and/or agreements that might have a different status if necessary. Moreover, it might be possible to design some elements in a way to make the room for others to join.”

China welcomed the U.S.-Russian decision to launch a strategic dialogue.

“China always actively supports international efforts in nuclear arms control, and will continue to hold discussions on a broad range of issues bearing on strategic stability with relevant parties within such frameworks as the cooperation mechanism of the five nuclear-weapon states, Conference on Disarmament, and the [UN General Assembly] First Committee. We also stand ready to have bilateral dialogue with relevant sides with mutual respect and on an equal footing,” Chinese Foreign Ministry spokesperson Zhao Lijian said June 17.

During a round of the strategic stability dialogue in June 2020, the two countries agreed to form three working groups, which met the next month. (See ACT, July/August and September 2020.) A U.S. official at the time said the topics for the working groups were nuclear warheads and doctrine, verification, and space systems.

Whether those groups have continued their work since then is unclear.

The new strategic stability dialogue would be separate from any future negotiations on a potential arms control agreement to follow New START, but it could help set the foundation for those formal follow-on talks.

Rose Gottemoeller, chief U.S. negotiator for New START, emphasized in a June 14 Politico op-ed that the goal for the strategic stability dialogue should be “a good discussion rather than a treaty, although over time the two sides may agree to some measures to build mutual understanding, confidence and predictability.”

Regarding future negotiations on a replacement for New START, Gottemoeller urged Biden and Putin to “issue clear, simple guidance about what exactly the new treaty will cover and when it should be completed.”

The summit between Biden and Putin came at the tail end of Biden’s first international trip as president, which also included the NATO leaders’ summit on June 14. In the communiqué released after that summit, the 30 heads of state expressed “their strong support for [New START’s] continued implementation and for early and active dialogue on ways to improve strategic stability. Allies will welcome new strategic talks between the United States and Russia on future arms control measures, taking into account all Allies’ security.”