The United States and Russia concluded the latest round of their strategic security dialogue on June 22 without agreeing to extend the 2010 New Strategic Arms Reduction Treaty (New START), the last remaining arms control agreement limiting their nuclear arsenals. 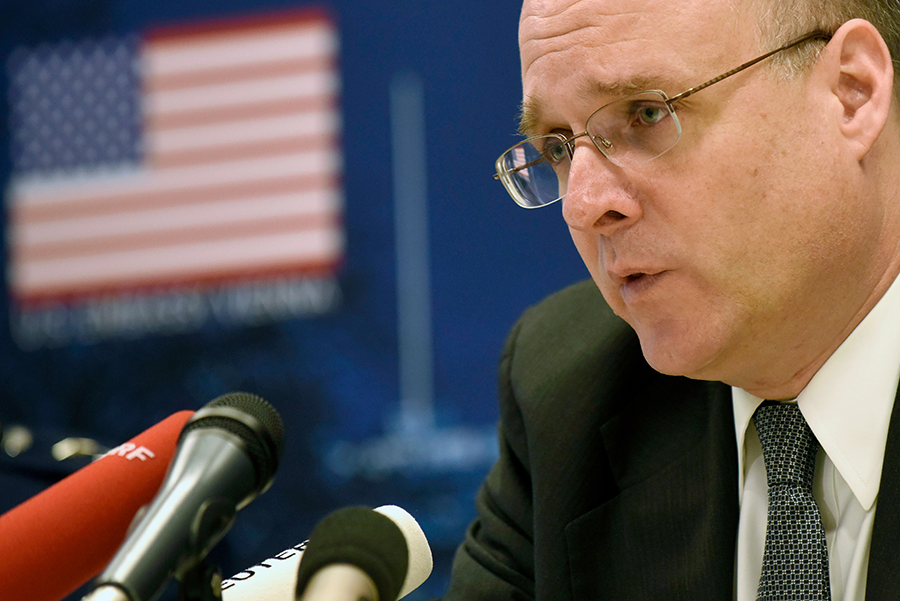 The United States is “leaving all options available” on the future of the treaty, said Marshall Billingslea, U.S. special envoy for arms control, who led the U.S. delegation at the talks in Vienna, during a June 24 briefing in Brussels.

“We are willing to contemplate an extension of that agreement but only under select circumstances,” he said. Those circumstances include making progress toward a new trilateral arms control agreement that has strong verification measures, covers all nuclear warheads, and involves China, according to Billingslea.

New START will expire in February 2021 unless U.S. President Donald Trump and Russian President Vladimir Putin agree to extend it by up to five years. Russia has repeatedly stated that it is ready to extend the treaty without any preconditions and warned that there is not enough time to negotiate a new agreement to replace it before next February. U.S. allies have also urged the Trump administration to extend the treaty.

Trump administration officials, however, have argued that New START is outdated and are instead prioritizing the pursuit of a broader agreement. (See ACT, May 2019.)

Billingslea characterized the talks with Russia in Vienna as “positive” and said the two sides had agreed to form technical working groups to discuss key issues.

The special envoy said he was hopeful that the working groups would make “sufficient progress” to allow for a second round of talks “at the end of July or maybe beginning of August,” when “China again will be called upon to attend.”

The Wall Street Journal on June 23 quoted an unnamed U.S. official who said that the topics for the working groups would be nuclear warheads, especially Russia’s unconstrained stockpile of nonstrategic nuclear weapons, and doctrine; verification; and space systems. But a June 24 report in Kommersant cited Russian officials saying Moscow did not necessarily agree to discuss nuclear warheads.

Asked about the discrepancy, Billingslea replied that he would have “to circle back” on this issue with Deputy Foreign Minister Sergey Ryabkov, who had led the Russia delegation in Vienna.

The Russian Foreign Ministry said at the conclusion of the talks that “the delegations continued discussing the future of arms control, including extending [New START] and maintaining stability and predictability in the context of the termination of the [Intermediate-Range Nuclear Forces] Treaty, as well as a comprehensive dialogue on resolving international security problems.”

Prior to the start of the June 22 talks, Billingslea tweeted a picture of the table, with some empty seats reserved with Chinese flags. “Vienna talks about to start,” Billingslea said. “China is a no-show…We will proceed with Russia, notwithstanding.”

Fu Cong, director-general of the Department of Arms Control in the Chinese Foreign Ministry, replied, “What an odd scene… Good luck on the extension of the New START! Wonder how LOW you can go?” The United States and Russia are currently believed to possess about 6,000 total nuclear weapons apiece, while China has roughly 300.

Following the Vienna talks, Chinese Foreign Ministry spokesperson Zhao Lijian said on June 23 that the U.S. placement of Chinese flags at empty seats “is unserious, unprofessional, and unappealing for the U.S. to try getting people’s eyes in this way.” 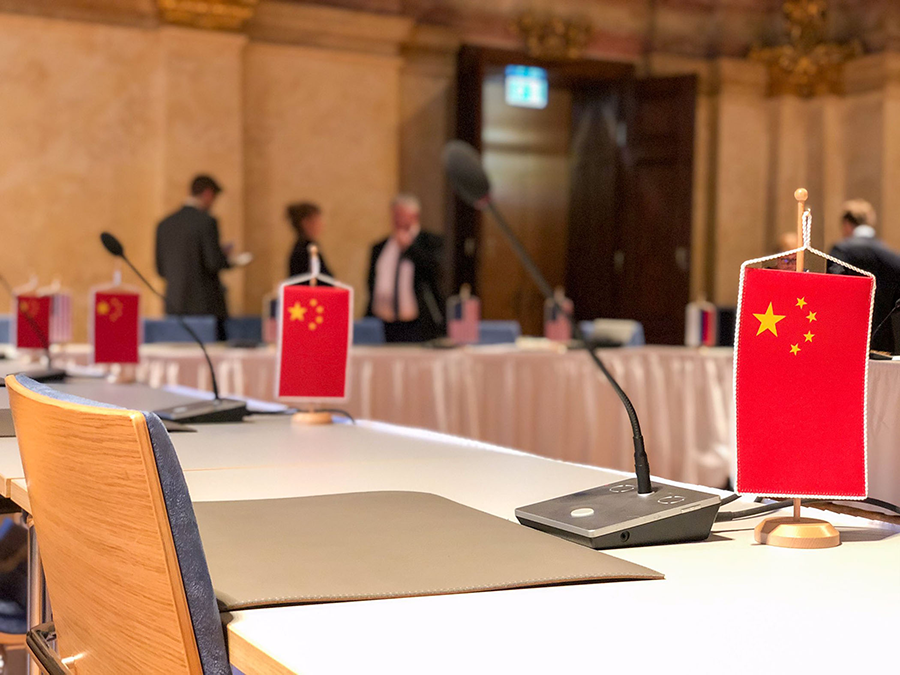 He also noted the incorrect design of the flags that the United States set on the table. “We hope certain people in the U.S. can do their homework and improve their general knowledge to avoid becoming a laughing stock,” he said.

The Trump administration claims that China is engaged in a secret, crash program to build up its nuclear forces and that future arms control efforts must include Beijing.

Billingslea on June 8 invited Beijing to join the talks in Vienna, but the following day, Chinese Foreign Ministry spokesperson Hua Chunying declined the invitation. “China has repeatedly reiterated that it has no intention of participating in the so-called trilateral arms control negotiations with the United States and Russia,” she said. “This position is very clear.”

Russia has refused to pressure China to change its position and join the talks. “China should itself decide whether these talks are beneficial for the country,” said Anatoly Antonov, Russian ambassador to the United States, on June 20. “We will not force our Chinese friends.”

Antonov also repeated a longtime Russian stance that if China joins arms control talks, then U.S. allies France and the United Kingdom should as well.

Billingslea acknowledged that the U.S. “definition of multilateral might be different, but the principle remains the same.” He claimed that China’s nuclear buildup poses a much greater threat than the French and UK nuclear arsenals.

The Trump administration has yet to put forward a concrete proposal for what it wants arms control with China to achieve or detail what the United States would be willing to put forward as concessions in trilateral talks with Russia and China.

Prior to and following the talks in Vienna, Billingslea touted the support of U.S. allies for the Trump administration’s approach to arms control.

Allies have praised the administration for resuming talks with Russia and seeking to bring China into the arms control process, but they also continue to urge the Trump administration to extend New START by five years.

During the Brussels Forum on June 23, NATO Secretary-General Jens Stoltenberg said that he welcomes “Russia and the United States sitting down and talking to each other on arms control” and agrees “that China should be involved.”

Still, he added, “in the absence of any agreement that includes China, I think the right thing will be to extend the existing New START agreement.”

“We should not end up in a situation where we have no agreement whatsoever regulating the number of nuclear weapons in the world,” he said.

Under its monitoring and verification regime, the treaty allows for short notice, on-site inspections.

As the Trump administration continues to assess whether to extend New START, inspections under the accord have been suspended since March due to the coronavirus pandemic. It is not clear when such inspections might resume.