As the site of the first atomic bomb attack, Hiroshima has served as a vital center for education about nuclear weapons and their effects. The people of the city, along with those of Nagasaki, have been steadfast in their advocacy for abolishing nuclear weapons. The survivors of the U.S. atomic bombings on Japan, the hibakusha, have worked to communicate their experience to global citizens and leaders. Kazumi Matsui, Hiroshima’s mayor since 2011, has played a major role in that effort. He serves as president of Mayors for Peace, an assembly of thousands of cities worldwide devoted to protecting cities from the scourge of war and mass destruction. 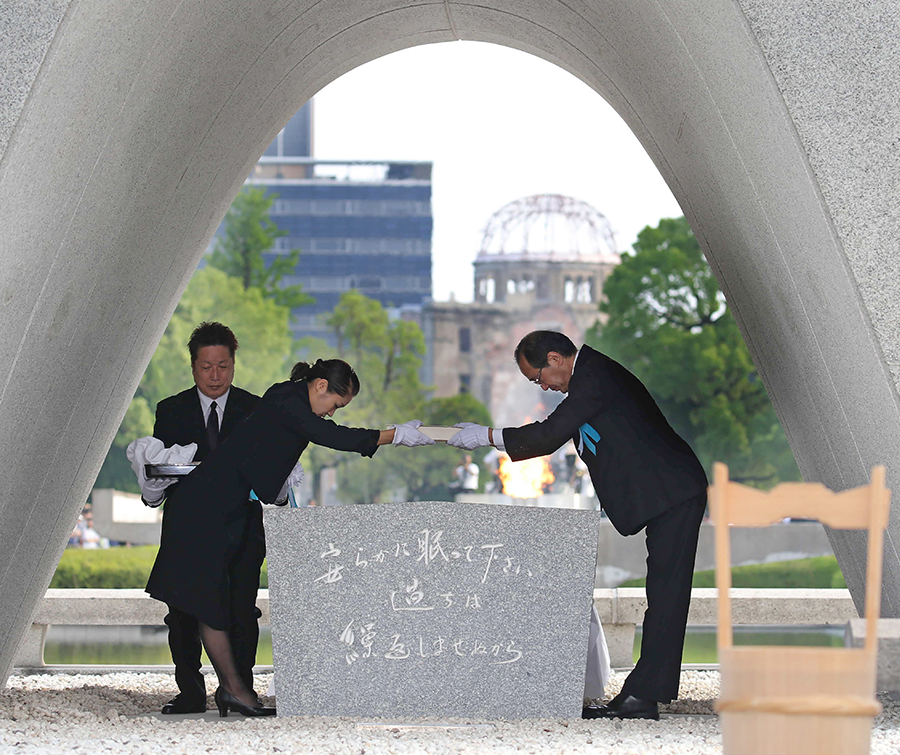 In response to the coronavirus pandemic, Hiroshima is planning to scale back large gatherings and instead hold virtual events marking 75 years since the August 6, 1945, bombing. Matsui spoke with Arms Control Today on June 23.

Arms Control Today: Seventy-five years after the first nuclear test explosion and the atomic bombings that destroyed your city and Nagasaki, what message do you, as the president of Mayors for Peace, and the people of Hiroshima, including the hibakusha, have for others around the world about living under the dark shadow of nuclear weapons?

Mayor Kazumi Matsui: In August 1945, two single atomic bombs dropped on the cities of Hiroshima and Nagasaki instantly reduced them to rubble, taking more than 210,000 precious lives. With almost 75 years since the bombings, the hibakusha, those who barely survived, still suffer from the harmful aftereffects of radiation. While their minds and bodies are in pain, they, together with other members of the public, continue to make their appeal that “no one else should suffer as we have.”

However, today, the nuclear-armed states possess about 13,000 nuclear warheads. The destructive power of every one of them is far above the atomic bombs dropped on Hiroshima and Nagasaki. These weapons could be used by accident or for terrorism. The current situation is far from what the citizens of Hiroshima, including the hibakusha, have been seeking for so long.

This is because the nuclear-armed states and their allies consider nuclear deterrence as essential for their security assurance, prioritizing the pursuit of only their own misguided national interest. However, this poses a grave threat to the survival of us all, the whole of humanity.

The current global coronavirus pandemic is a transboundary crisis that touches us all. We are experiencing firsthand that we can confront and defeat common threats through solidarity and cooperation. Based on what we have learned from this experience, we must build a robust global coalition of citizens everywhere to address and solve global security challenges, especially nuclear weapons. We must not take action based on self-centered nationalism.

I sincerely hope that everyone in the world will share in the hibakusha’s message and join us in realizing a peaceful world free of nuclear weapons.

ACT: There are now fewer and fewer hibakusha and fewer people who have witnessed the devastation of the atomic bombings. What can be done over the next 75 years to remind current and future generations of the experiences and the messages of the survivors of the Hiroshima and Nagasaki bombings and the health impacts of the use of nuclear weapons? Are we at risk of forgetting?

Matsui: The average age of the hibakusha has exceeded 82. With their unshakable conviction that “no one else should suffer as we have,” they have conveyed their experiences and their desire for peace to younger generations. However, if we leave this important task of passing down to the future generations to the hibakusha alone, then unfortunately, sooner or later, there will no longer be anyone able to do so.

In order to ensure that the hibakusha’s messages will be faithfully inherited and shared with future generations, the City of Hiroshima conducts various initiatives.

The Hiroshima Peace Memorial Museum exhibits belongings and photos of victims along with the words of their bereaved family members. Each item conveys to visitors the memories, sentiments, and the pain and sorrow of the victims and the bereaved. In addition, displays on the harm caused by the radiation tell the world of the inhumane nature of nuclear weapons. We encourage all world leaders and their fellow citizens to visit this museum to see the long-term catastrophic effects of the atomic bombings for themselves.

We also have a project to train A-bomb Legacy Successors, volunteers who pass down hibakusha experiences and their desire for peace on their behalf. Today, 131 successors are engaged in such activities.

We also make videos of hibakusha testimonies and collect memoirs in collaboration with the government. We are translating these into many languages so that all can understand their tragic experiences.

We intend to continue our efforts to enrich and expand these and make them available physically and online to share the messages of the hibakusha with the younger generation, who are the future of our society.

ACT: You and others have noted that "vital nuclear arms control agreements are being abandoned, budgets for development and production of new nuclear weapons are growing, and the potential for nuclear weapons use is too dangerous to tolerate. We are badly off course in efforts to honor the plea of the hibakusha and end the nuclear threat.” On an international level, how can and should the world get back on track toward nuclear disarmament?

Matsui: We see unilateralism is rising in the international community, and exclusivity and confrontational approaches have increased tensions between nations. Now, the international situation surrounding nuclear weapons is very unstable and uncertain. But why is that? Fundamentally, policymakers should tackle issues, even if they are rooted in local contexts, from a global perspective. However, they are more likely to jump to a short-term compromise, which results in the current international situation.

In order to break the status quo of dependence on nuclear deterrence and get back on track toward nuclear disarmament, it is essential to mobilize civil society’s shared values and create a supportive environment to give world leaders the courage to shift their policies.

Those shared values and desires of civil society aim at securing every citizen’s safety and welfare. As a nonpartisan organization made up of the very heads of local governments responsible for realizing that goal, Mayors for Peace implements a number of relevant initiatives.

Specifically, by utilizing its network of more than 7,900 member cities in 164 countries and regions, Mayors for Peace conveys the realities of the atomic bombings and works to increase the number of people who share in the hibakusha’s message. In this way, we can build a consensus among global civil society that the elimination of nuclear weapons is key to the peaceful future we need. This consensus will serve as the foundation for a collaborative international environment in which policymakers around the world can take decisive steps forward toward the total elimination of nuclear weapons.

I sincerely hope that all states, including the nuclear-armed ones, will engage in good-faith dialogue led by world leaders who wholeheartedly accept the earnest wish of the hibakusha, that is, the realization of nuclear weapons abolition as soon as possible. Through this, they will surely share wisdom and come up with an approach to make substantial progress in nuclear disarmament and nonproliferation.

ACT: What more can be done at the local level, especially by the younger generations, wherever they may live, to support global efforts for nuclear nonproliferation and disarmament?

Matsui: As I understand it, what civil society is sincerely seeking is to secure the public’s safety and welfare. But when it comes to big global challenges to the peaceful existence of humanity as a whole, such as the abolition of nuclear weapons, we should not limit our solutions to the framework of nation-states. Solutions should also be based on that sincere desire of civil society at the grass-roots level across the world. I believe that we should spread awareness of this throughout civil society.

My hope for younger generations, the future of our society, is that they will start thinking about the preciousness of their daily lives, which are supported by rules based on mutual trust. Hopefully, they will then understand that this is exactly what peace is and think what they can do to preserve it and take action.

In civil society, which is based on democracy, if every person develops such concepts of peace and takes action accordingly, it follows that policymakers will be elected who can realize our common wish. It is also not a dream for them to become policymakers themselves.

If more people come to envisage a future different from the past and work to realize it, they will become the drive to change the world.

Mayors for Peace puts emphasis on peace education aimed at raising awareness among younger generations as part of its intensified efforts. Through our various programs, we nurture young leaders who engage in peace activities proactively.

ACT: What more can Japan’s national leadership do to move us closer to the peace and security of a world without nuclear weapons?

Matsui: As the only country to have experienced the devastation caused by nuclear attacks, Japan has a responsibility to share the hibakusha’s sincere desire to abolish nuclear weapons with the world and take the lead on various initiatives to make that a reality.

Japan has a role in international society as a “bridge” between the nuclear-armed states and the states-parties of the Treaty on the Prohibition of Nuclear Weapons to foster and promote dialogue and cooperation. To realize abolition as soon as possible, Japan can and should do even more to fulfil this role. I hope this will happen from the bottom of my heart.