Authored by Kingston Reif and Shervin Taheran on May 24, 2019

Following a May 14 meeting in Sochi, Russia with Russian President Vladimir Putin and Foreign Minister Sergey Lavrov, Secretary of State Mike Pompeo told reporters that the two countries “agreed that … we will gather together teams that will begin to work not only on [the 2010 New Strategic Arms Reduction Treaty] New START and its potential extension but on a broader range of arms control issues that each of our two nations have.”

But it remains unclear when such talks will begin, who will lead the U.S. negotiating team, what the Trump administration would be willing to put on the table in return for bigger concessions from Russia and China as part of broader arms control talks, and whether New START would be extended in the absence of progress on a more comprehensive deal.

Last month, a senior administration official told reporters that President Donald Trump had directed his administration to seek a new arms control agreement with Russia and China. The official told CNN that the agreement should include “all the weapons, all the warheads, and all the missiles.” The official criticized New START for only limiting U.S. and Russian deployed strategic nuclear weapons.

At a May 15 Senate Foreign Relations Committee hearing on the future of nuclear arms control, Andrea Thompson, undersecretary of state for arms control and international security, said that the Trump administration “has not made any decision on a potential extension of New START.” An interagency review of the treaty and whether to extend it has been ongoing for about a year.

Thompson added that several issues would have an impact on an extension decision, including Russia’s development of new types of strategic weapons systems and modernization of its large stockpile of non-strategic (or tactical) nuclear weapons, Russia’s record of violating arms control agreements, and “China’s lack of transparency regarding the scope and scale of its nuclear modernization program” and unwillingness to discuss nuclear weapons issues with the United States.

Russia has repeatedly expressed interest in extending New START, but it has raised concerns about U.S. procedures to remove submarine-launched ballistic missile (SLBM) launchers and some B-52 bombers from treaty accountability.

Moscow has also expressed a willingness to begin a dialogue with the United States on broader strategic stability issues, but it has its own list of concerns about U.S. policies and weapons systems – including missile defense systems, cyber weapons, weapons development in space, and advanced conventional arms.

The Trump administration has shown no indication that it would be willing to limit these weapons in an agreement with Russia or China. Even if it were willing to do so, it is highly unlikely an agreement could be reached before New START expires in less than two years.

Trump told reporters May 3 that he had already spoken to China about a trilateral nuclear arms control deal, and that “they very much would like to be a part of that deal.” But a Chinese Foreign Ministry spokesperson said May 6 that China “will not take part in any trilateral negotiations on a nuclear disarmament agreement.”

In a May 6 interview in Finland, Pompeo acknowledged that a trilateral deal involving China and that covers all types of U.S. and Russia nuclear weapons might be “too ambitious.” He noted that “there’s just a couple years left before New START expires” and that it may be necessary to address the expiration of the treaty “on a bilateral basis.”—KINGSTON REIF, director for disarmament and threat reduction policy, and SHERVIN TAHERAN, research assistant

Several Democratic Senators expressed exasperation at a May 15 hearing about the unwillingness of Andrea Thompson and David Trachtenberg, the deputy undersecretary of defense for policy, to provide their or the administration’s views on what the implications would be for U.S. security without New START.

Asked by Sen. Robert Menendez (D-N.J.), the ranking Democrat on the committee, whether Russia could target the United States with “hundreds or perhaps thousands of additional nuclear warheads in the absence of the treaty, Thompson replied: “That is a great question for Russia, Senator.”

“No,” Menendez erupted in response. “[T]hat is a great question for you.”

Asked at the hearing why he believed that China would want to engage in disarmament talks with the United States and Russia given its much smaller nuclear arsenal, Trachtenberg replied that he couldn’t “get into the mind of the Chinese leadership.” But he said that “China should accept the responsibilities of a major power in the world today” by “engaging with respect to its nuclear arsenal.”

China is estimated to possess roughly 300 nuclear warheads according to the Federation of American Scientists. In contrast, the United States and Russia are believed to possess over 6,000 warheads each.

“To be clear, I welcome the administration's efforts to expand the scope of arms control negotiations,” Menendez noted. “However, given the challenges inherent in reaching new agreements with Russia and China, I strongly believe the limitations and verification measures of New START must remain in place while any such negotiation occurs.”

He added that any “new initiative must not serve as an excuse for suddenly withdrawing from another international agreement,” referring to earlier administration decisions to withdraw from the 2015 Iran nuclear deal and 1987 Intermediate-Range Nuclear Forces (INF) Treaty.

Sen. James Risch (R-Idaho), the chairman of the Senate Foreign Relations Committee, made several questionable claims about New START and related issues at the May 15 arms control hearing. Below are rebuttals to some of those claims.

CLAIM: “We have had four agreements with Russia – New START, the INF Treaty, the Open Skies Treaty, and the Chemical Weapons Convention. Russian compliance is problematic across the board. ”

FACT: The United States alleges Russia to be in noncompliance with several arms control agreements. But New START is not one of them. Thompson stated in her written testimony that “We are implementing the New START Treaty and verifying Russian compliance.”

CLAIM: “Russia also claims to be enhancing their strategic systems, developing a new high-yield warhead, and new delivery systems that can carry multiple warheads. Why would Russia build a new ballistic missile that can carry more warheads than allowed by New START?”

FACT: New START limits the total number of accountable deployed strategic warheads and missiles each party can field. The treaty does not limit that number of warheads an individual strategic delivery system can carry.

CLAIM: “And a number of us were adamantly opposed to it [New START] for a lot of the reasons.... And one of them was … modernization. And we were promised … these modernization efforts. And it's been a real disaster in that regard. We just haven't followed through on it and it's–it's very unfortunate. One of the many reasons why I oppose … a gratuitous five-year extension, given where we are.”

FACT: In November 2010, when the Senate was debating New START, the Obama administration pledged to spend about $85 billion between fiscal years 2011 and 2020 on nuclear weapons activities at the National Nuclear Security Administration (NNSA). (Separately the Defense Department identified $100 billion in planned spending on delivery system sustainment and modernization, though it was never entirely clear what this number included). 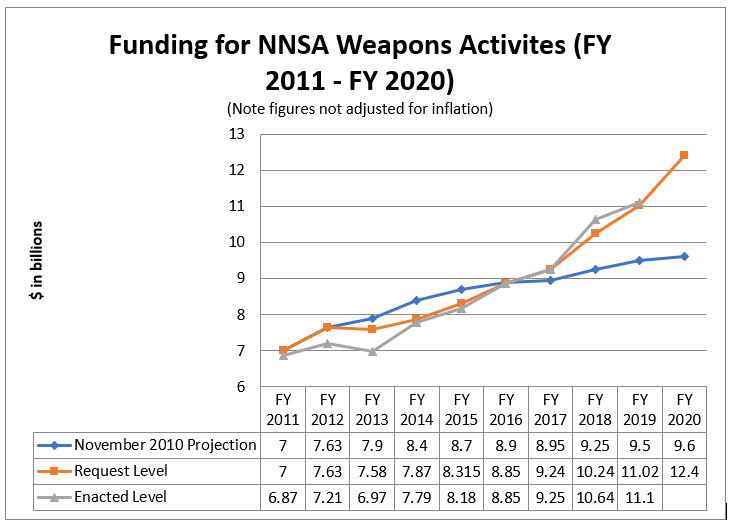 Spending on NNSA weapons activities over the 10-year period between fiscal years 2011 and 2020 will exceed what was projected (see chart at right). The Obama administration initially kept pace with the pledged levels, then had to cut back due to the unwillingness of House Republican appropriators to fund the requested amounts and later the 2011 Budget Control Act, and then returned to the pledged levels in fiscal years 2016 and 2017. The Trump administration for its part has blown way above the levels projected in 2010. Spending on nuclear weapons by the Defense Department has greatly exceeded $100 billion since fiscal year 2011.

A new poll published in May by the Center for International and Security Studies at the University of Maryland showed that an overwhelming 82 percent of Americans support extending New START. According to the poll, 89 percent of Democrats and 77 percent of Republicans support extension. In addition, 83 percent of respondents said they approve of continuing to have arms control treaties with Russia.

The deaths in late April of Senator Richard Lugar (R-Ind.), former chairman of the Senate Foreign Relations Committee, and Ellen Tauscher, former Undersecretary of State for Arms Control and International Security, sent shockwaves throughout Washington and the arms control community. In honor of their achievements in the area of nuclear weapons risk reduction, several Members of Congress have signed on to bills praising Lugar and Tauscher for their work.

The bill expresses the Sense of Congress that New START should be extended by five years unless Russia is determined to be in material breach of the agreement or the treaty is replaced by a pact that contains equal or greater verifiable constraints on Russia’s nuclear forces.

The chairmen of three key House national security committees sent a May 16 letter to Secretary of State Pompeo raising concerns about “the abuse of classification and politicization of intelligence regarding Iran and other countries” in the department’s annual report on “Adherence to and Compliance with Arms Control, Nonproliferation, and Disarmament Agreements and Commitments.”

Reps. Adam Smith (D-Wash.), Adam Schiff (D-Calif.), and Eliot Engel (D-N.Y.), the heads of the House Armed Services, Intelligence, and Foreign Affairs Committees, respectively, warned of the “perils of ignoring and ‘cherry-picking’ intelligence” and asserted that the unclassified version of the report did not comply with the department’s legal requirements.

The letter from House committee leaders followed a May 2 letter to Pompeo spearheaded by Sen. Jeff Merkley (D-Ore.), which also demanded answers on the alleged politicization of the compliance report.

The 2019 State Department report was shorter than it had been in the past and included a major focus on Iran and almost no focus on nuclear arms control with Russia, including the INF Treaty. Reuters reported that the preparation of the report provoked a dispute between U.S. intelligence agencies and some State Department officials who were concerned that the document politicized and slanted assessments about Iran.

On May 13, The Washington Post reported that the State Department official in charge of the compliance report, Yleem Poblete, had resigned for unexplained reasons. Aides and officials familiar with the situation noted that Poblete clashed frequently with her boss, Undersecretary Thompson, including on the compliance report.