Before I ever thought of running for elected office, I interacted a lot with folks at the Arms Control Association and in the arms control community back in the 1980s. I grew up in a Foreign Service family in many places around the world, but one of the things that I remember most and that had a great impact on me was when I read Jonathan Schell’s New Yorker series, “The Fate of the Earth,” that described what would happen to the planet after a nuclear war. That, among other things, led me to concentrate in graduate school on international security matters, and I went to work on Capitol Hill in the mid-1980s as the legislative assistant for defense policy and arms control to former Maryland Senator Mac Matthias, who was a liberal, moderate Republican of the civil rights era. 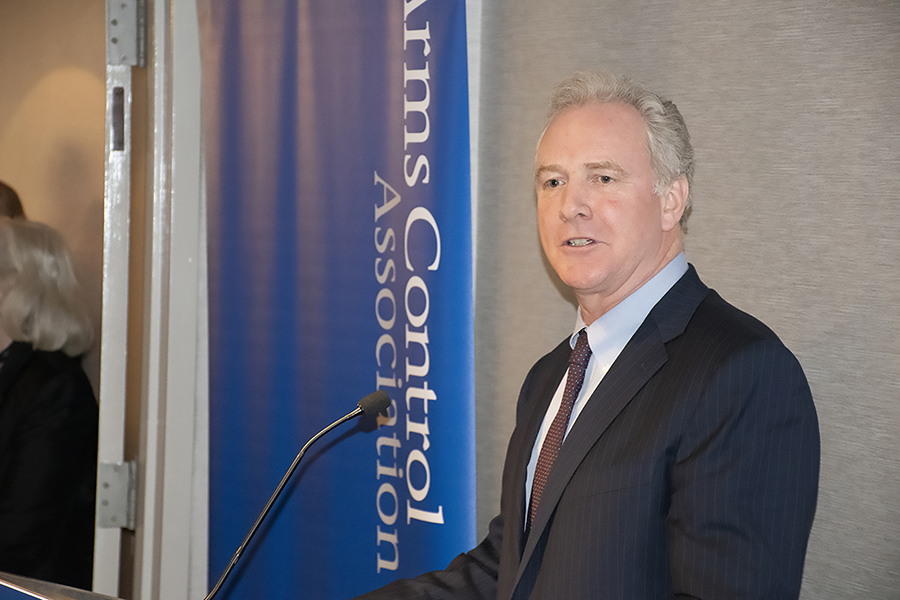 Part of my portfolio was NATO, and I worked on the ratification of the Intermediate-Range Nuclear Forces (INF) Treaty back in the day. Then the Berlin Wall came down. The Cold War ended. It was great news for the world; it was great news for the country. It ushered in a period of relative stability, including on arms control agreements, the most recent one being the New Strategic Arms Reduction Treaty (New START).

But now, we gather here at another urgent moment. It has been important work all along, but we are in an urgent moment now. Because with the Trump administration, all signs indicate that we’re jettisoning, we’re abandoning what has been a bipartisan tradition of recognizing that we need to modernize our nuclear forces, we need to modernize our triad, we need to make sure its survivable and resilient, but that we should do it within the framework of an arms control architecture that leads to predictability, stability, and transparency. That has been an important formula even as relations between the United States and the Soviet Union, now Russia, have gone up and down. We have still maintained that conversation, we have still maintained that structure, and that structure has helped keep the peace.

Now with this new administration, with [National Security Advisor] John Bolton in the White House, we are in a very different world. He has not found a nuclear arms agreement or, as far as I can tell, any multilateral agreement or international agreement that he likes.

But when it comes to arms control, despite his being a foe, he has never explained how an unconstrained nuclear arms race would actually make us any safer. He can never answer that argument. He just tells us what he doesn’t like, but he doesn’t tell us what is better, that would make us more stable.

That’s where we are right now. The tearing up of the INF Treaty was an early indication of where this administration is going.

But there is a big gulf between standing idly by and being the first to initiate tearing up the agreement. There is a whole area of engaging in the act of diplomacy and enforcement and looking for every other alternative first. That, this administration has not done.

The notion that we should therefore just proceed with developing not just one, but multiple noncompliant INF missiles makes no sense. We already have a robust capability when it comes to responding to anything in the European theater. We already have dual-capable bombers with gravity bombs, we have air-launched cruise missiles, we have a range of weapons that already serve as a deterrent. So, just building more for the sake of building more doesn’t do us any good, and it creates more instabilities.

In addition, I don’t buy the argument that we need to have an intermediate-range missile on Guam with the purpose of holding the Chinese in check. There are lots of things we need to be doing in that region, but I don’t think a missile on Guam does the job. As you know, our other allies, Japan and South Korea, have made it very clear they won’t deploy this kind of missile.

There is really no good argument for rushing to tear up the agreement. Obviously, it has created a lot of anxiety among our European allies. I was at the Munich Conference when Prime Minister Angela Merkel spoke. She was very upset at the way this had all rolled out and with the result. Now, our NATO allies are putting a game face on. You saw the secretary-general here addressing the U.S. Congress, but NATO would have preferred to see a very different outcome.

Of course, what is happening on INF leads to an even more worrisome situation with respect to New START. Because if you get rid of INF and New START, you’re in a world where there are no enforceable, written, agreed-on limits on our nuclear forces. So, that is why a group of us wrote to President Trump urging the administration to get going on a discussion to extend the New START agreement.

Russia has complied with the New START agreement. And as we modernize our nuclear forces, which we need to do to maintain our own deterrent, it is a much better world to do that where we have predictability and stability knowing what the Russian strategic forces are and what limits they’re under. This is in addition to the important transparency and inspection regime that the treaty brings. You get rid of New START, you get rid of INF, you are potentially flying entirely blind unless both sides voluntarily agree to comply, but that is not guaranteed. That is a big, big issue.

The other issue I want to focus on has to do with the overall nuclear posture that this administration is pursuing when it comes to nuclear weapons. I think we all agree that we need to modernize our nuclear forces, but we don’t need to add on every single, conceivable new capability.

It’s like showing up at a buffet and, instead of having a balanced meal, you say, “I will just gorge on every single capability that is out there.” When you only need a balanced meal to do the job, you don’t need to eat everything at the nuclear buffet table, including offensive and defensive weapons.

Unlike a dinner buffet where it’s “all you can eat at a fixed price,” the nuclear buffet table requires you to pay for everything. With the current spending plan, that is right now estimated to be $1.7 trillion over the next 30 years by the Congressional Budget Office. If you add on all the other capabilities this administration apparently wants to add on, you’re talking about an even bigger price tag.

So, in addition to having a big price tag, you’re also talking about building additional capabilities that are not only unnecessary, but can be very destabilizing. That is especially true when it comes to the administration considering two new capabilities with submarine-launched ballistic missiles, putting a low-yield warhead on some, as well as resuscitating the nuclear-armed, sea-launched cruise missile.

I think that if you look at the direction we’re going, it is very worrisome from a price tag perspective when we have so many other national requirements and priorities. But also, we are going to be spending taxpayer money on something that actually makes us less, not more, safe by lowering the threshold of use of nuclear weapons. Therefore, we’re increasing the risks of an all-out
nuclear war.

The reason we have arms control agreements to begin with is the idea that when you start building all these new capabilities, it inevitably touches off an action-reaction cycle. Whether you are doing offensive weapons only or defensive ones too, you are bound to create a new arms race. That is expensive and destabilizing, and it risks nuclear confrontation and war, which obviously means the end of life on Earth as we know it.

In our office, we are very focused on this. We are going to be teaming up with Senator Jeffrey Merkley (D-Ore.) and others on the Appropriations Committee to try to zero out the funding for these low-yield warheads. They are unnecessary. Representative Adam Smith (D-Wash.), the chairman of the House Armed Services Committee, is pursuing a similar approach.

So, I will just close with the statement that was jointly made by Russian leader Mikhail Gorbachev and U.S. President Ronald Reagan in Geneva, 30 years ago: “A nuclear war cannot be won and must never be fought.” Let us dedicate ourselves to making sure that remains the case, that nobody thinks they can win a nuclear war. Because that will be, as Jonathan Schell described, the end of the earth.

Excerpted from remarks delivered by Sen. Chris Van Hollen (D-Md.) to the Arms Control Association’s annual meeting on April 15 in Washington. Elected to the Senate in 2016, Van Hollen previously represented Maryland’s Eighth District in the House of Representatives.