“What's really strikes me about ACA is the potential to shape the next generation of leaders on arms control and nuclear policy. This is something I witnessed firsthand as someone who was introduced to the field through ACA.”
– Alicia Sanders-Zakre
ICAN
June 2, 2022
As INF Treaty Falls, New START Teeters

Following President Donald Trump’s announcement last October that he planned to “terminate” the landmark 1987 Intermediate-Range Nuclear Forces (INF) Treaty, the chances were remote that the United States and Russia could achieve an 11th-hour diplomatic miracle to save the treaty and reduce the growing risk of a renewed missile race in Europe. 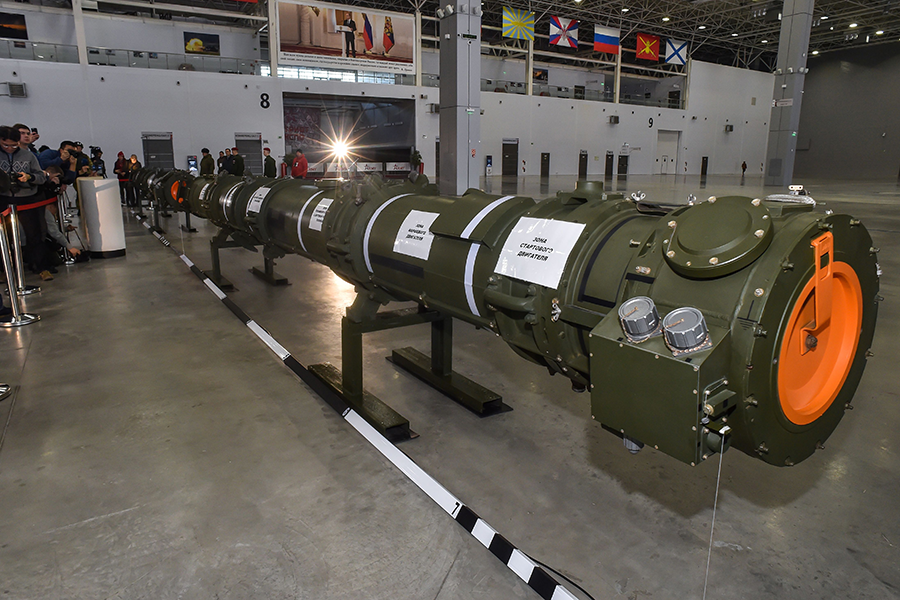 German Chancellor Angela Merkel persuaded Trump to hold off on withdrawal for 60 days to give diplomacy one last chance, but Washington and Moscow spent more time assigning blame for the crisis than discussing ways to resolve their concerns. Those issues revolve around the years-old U.S. charges that Russia developed and deployed a treaty-prohibited, ground-launched, nuclear-capable cruise missile, known as the 9M729, and Russian countercharges that the United States is violating the treaty. (See ACT, January/February 2019.)

It came as no surprise, therefore, that U.S. Secretary of State Mike Pompeo formally declared on Feb. 2 that the United States would withdraw from the treaty effective in August. Pompeo also stated that Washington would immediately suspend its obligations under the pact. The announcement reflected National Security Advisor John Bolton’s long-held opposition to the INF Treaty and other negotiated arms limitation agreements.

Russia immediately reciprocated by announcing that it too would suspend its treaty obligations.

To make matters worse, as the INF Treaty draws its final breaths, the future of the 2010 New Strategic Arms Reduction Treaty (New START) is increasingly uncertain. If New START is allowed to expire without a replacement in 2021, there will be no legally binding limits on the world’s two largest strategic arsenals for the first time since 1972.

The INF Treaty required Russia and the United States to eliminate permanently their nuclear and conventional ground-launched ballistic and cruise missiles with ranges of 500 to 5,500 kilometers.

Pompeo left open the possibility that the United States would return to the treaty if Russia verifiably eliminates “all 9M729 missiles, their launchers, and associated equipment in this six-month period.”

Russia, however, has given no indication that it would meet U.S. demands for an inspection of the missiles; and the United States is similarly unwilling to address Russia’s concerns about U.S. treaty compliance, notably the fielding of U.S. missile defense interceptor launchers in Europe that Moscow says could be used to launch offensive missiles in violation of the agreement.

Although apparently eager to end the treaty, the White House has yet to articulate a strategy to prevent Russia from building more and new types of land-based, intermediate-range missiles.

Russian President Vladimir Putin said in a Feb. 2 meeting with Foreign Minister Sergey Lavrov and Defense Minister Sergei Shoigu that Russia would retaliate to the U.S. abrogation of the agreement by beginning research and development on “land-based modifications of the sea-based Kalibr launching systems” and “land-based launchers for hypersonic intermediate-range and shorter-range missiles.”

Putin added that Russia would “not deploy intermediate-range or shorter-range weapons, if we develop weapons of this kind, neither in Europe nor anywhere else, until U.S. weapons of this kind are deployed to the corresponding regions of the world.” If there were such U.S. deployments, however, Putin vowed Feb. 20 that Russia would “be forced to respond with mirror or asymmetric actions” such as Russian “weapons that can be used not only in the areas we are directly threatened from [Europe], but also in areas that contain [U.S.] decision-making centers for the missile systems threatening us.”

In his Feb. 6 State of the Union address, Trump alluded to negotiating a new intermediate-range missile agreement that would also include China, but the administration has not yet raised the issue with China, which possesses hundreds of land-based, intermediate-range missiles. Joining the INF Treaty would mean that China would have to eliminate 95 percent of its missile arsenal.

Some European leaders have suggested diplomatic options that could avert a new missile race that would undermine European security.

Finnish President Sauli Niinisto proposed on Feb. 16 at the Munich Security Conference that the United States and Russia could agree to keep Europe “free” of INF Treaty-prohibited missiles.

NATO Secretary-General Jens Stoltenberg said before Feb. 12 meetings with NATO defense ministers that the alliance is “planning for a world without the INF Treaty.”

“Any steps we take will be coordinated, measured, and defensive,” he added. “We do not intend to deploy new ground-based nuclear missiles in Europe.” Stoltenberg did not say whether the alliance, which has expressed support for the U.S. withdrawal from the treaty, would also forgo the deployment of conventional, ground-launched, intermediate-range missiles.

Congress approved $48 million in fiscal year 2019 to research and develop concepts and options for such conventional missile systems. (See ACT, November 2018.) The status of the development work is unclear.

Andrea Thompson, U.S. undersecretary of state for arms control and international security, told PBS NewsHour on Feb. 7 that the United States is not currently planning to deploy banned missiles in Europe, but noted that “when we develop next steps, it will be in consultation with partners and allies.”

The Pentagon’s fiscal year 2020 budget request, due for release in mid-March, is likely to include additional funding for developing new ground-launched missile systems.

Even if the United States were to develop such weapons, they would need to be deployed on the territory of allies neighboring Russia. So far, no country has said that it would be willing to host such missiles. If one did, a bilateral arrangement that circumvents NATO decision-making would likely be controversial.

Polish Foreign Minister Jacek Czaputowicz said at the Munich conference on Feb. 15 that Poland is “against” hosting U.S. ground-launched, intermediate-range missiles. If a decision is made to deploy such missiles, he added, “it will be a decision of all the [NATO] alliance.”

In the likely event that the INF Treaty collapses, the only remaining U.S.-Russian arms control agreement would be New START, which expires in 2021 but can be extended by up to five years by mutual agreement.

The Trump administration has yet to formulate the U.S. position on New START’s future. (See ACT, September 2018.) Thompson said on Feb. 7 that the administration “has an interagency process addressing that.… We will see what 2021 holds.”

Before joining the Trump administration, Bolton was a frequent and vocal critic of New START, castigating the agreement as unilateral disarmament.

Russia has repeatedly expressed interest in extending the treaty, but it has raised concerns about U.S. procedures to remove submarine-launched ballistic missile (SLBM) launchers and some B-52 bombers from treaty accountability.

Thompson last year described the Russian concerns about U.S. implementation of New START as manufactured and raised concerns about Russia’s development of new strategic-range nuclear weapons systems, such as globe-circling, nuclear-powered cruise missiles, and very long-range nuclear torpedoes. Russia claims that these systems would not be limited by New START because they do not use ballistic flight trajectories.

In an 11-page paper sent to members of the U.S. Senate Foreign Relations Committee last December, Russia described the U.S. conversion procedures as “unlawful” and warned that “these problems might potentially disrupt prospects” for New START’s extension after 2021.

According to the Russian paper, the Trump administration in December 2017 proposed two steps to address Russia’s concerns, including “a cabinet-level written political commitment that the United States does not intend to reverse the conversion of any of the converted Trident II SLBM launchers or B-52H heavy bombers for the duration” of New START. Russia characterized these proposals as “a step in the right direction,” but ultimately deemed them insufficient. It is not clear if the U.S. proposals remain on the table.

Pranay Vaddi, a former State Department official and now a fellow at the Carnegie Endowment for International Peace, said in a Feb. 19 email that this Russian concern “is a silly issue to stand in the way of a potential extension of the treaty, but can be resolved with minimum effort if the sides have the will to do it.”

“The United States and Russia should focus discussions on increased transparency using existing treaty mechanisms as a model, rather than attempting major changes to the [conversion] procedures, or to the regular operations of U.S. submarines and bombers,” he added.

The White House appears to believe that there is plenty of time left for the two sides to make a decision on an extension, but Russia is warning that time is short.

Russian Deputy Foreign Minister Sergei Ryabkov told reporters in Moscow on Feb. 7 “that there is almost no time left” to discuss Russia’s continuing concerns about U.S. implementation of the treaty and other issues necessary to pave the way for an extension.