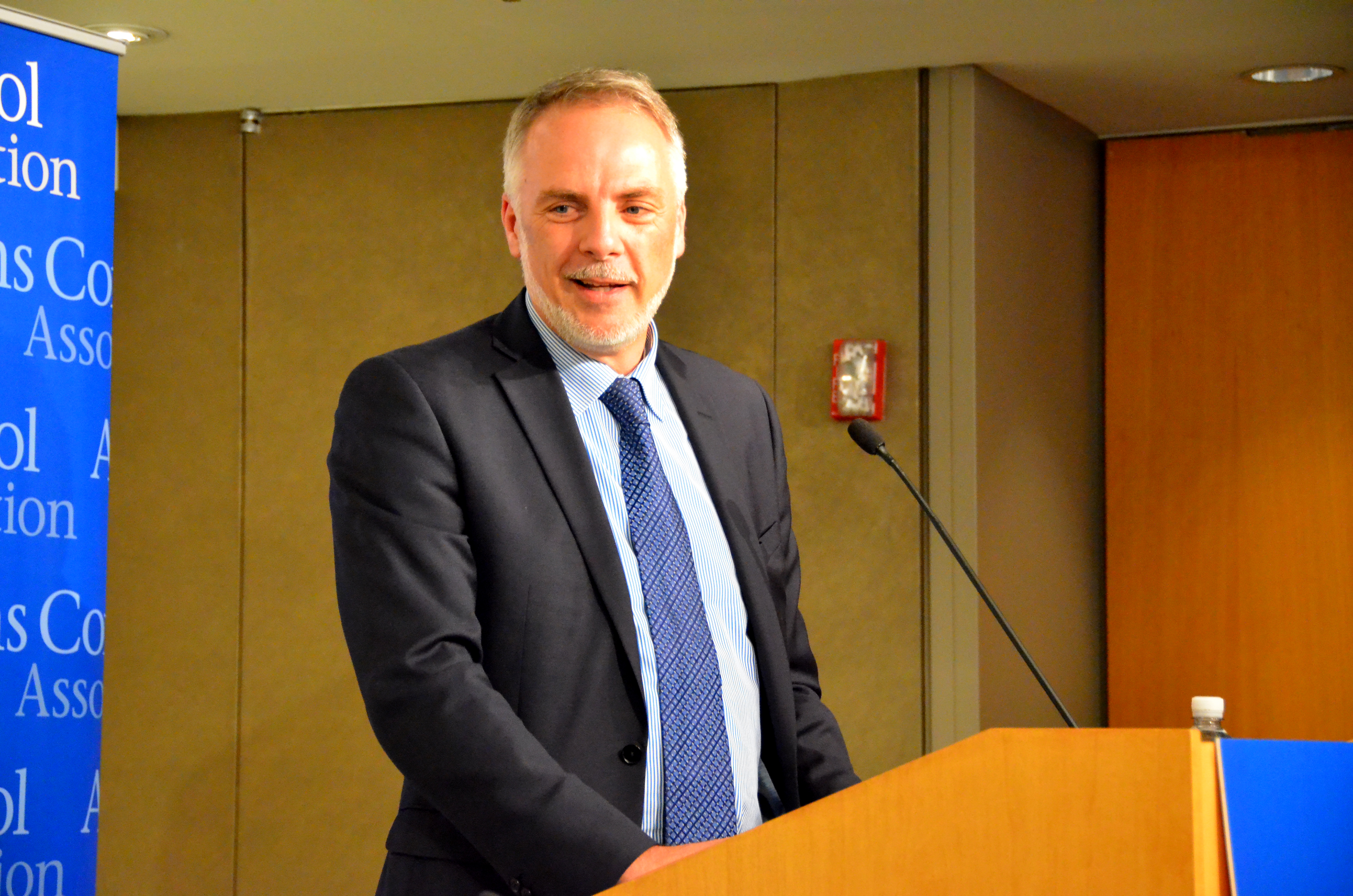 UN member states voted last month to create a working group to advance nuclear disarmament amid opposition from the nuclear-weapon states, uncertainty about how widespread participation in the group will be, and disagreement about how the group should operate and what it should seek to accomplish.

The contentious debate in the UN General Assembly First Committee, which deals with nuclear disarmament, on that vote and others also illustrated the continuing, broader divisions among key countries on disarmament and even exacerbated those divisions, according to experts and diplomats.

On Nov. 5, by a vote of 135-12 with 33 abstentions, the First Committee approved a resolution by Mexico that would create an open-ended working group, a forum in which all UN members can participate, to “substantively address concrete effective legal measures, legal provisions and norms” necessary to “attain and maintain a world without nuclear weapons.”

The working group also would “substantively address recommendations on other measures that could contribute to taking forward multilateral nuclear disarmament negotiations.” Specifically, the resolution cited transparency and threat reduction measures related to the risks associated with existing arsenals and additional measures to increase awareness about the humanitarian and societal consequences of nuclear weapons use. The latter issue has been the focus of an effort known as the humanitarian initiative.

The resolution says the group should convene in Geneva in 2016 for up to 15 days and present a report on its work to the General Assembly at its session next year.

The creation of a working group on disarmament was a recommendation contained in the draft final document from the nuclear Nonproliferation Treaty (NPT) review conference that took place earlier this year. (See ACT, June 2015.) The participants in the review conference did not agree to adopt the document.

But in contrast to the NPT recommendation, the Mexican proposal, which was co-sponsored by a group of countries associated with the humanitarian initiative, the working group would operate according to the General Assembly’s normal rules of conducting business, which do not require consensus. (See ACT, November 2015.)

Proponents of this approach argue that it represents a way to move forward on disarmament issues in light of the deadlock that continues to block progress on those issues in other UN forums, such as the Conference on Disarmament, which includes only 65 countries and operates on the basis of consensus. (See ACT, September 2015.)

In a Nov. 2 statement on behalf of the five nuclear-weapon states, Alice Guitton, the French permanent representative to the Conference on Disarmament, called the resolution “divisive” and said it lacked “vital components that would guarantee both a meaningful collaboration and a productive outcome.”

She added that the five states “remain open” to “an appropriately mandated” open-ended working group that operates “through a consensus-based approach” and is “fully anchored in the security context.”

The First Committee appeared poised to vote on a second proposal for an open-ended working group, but Iran, the resolution’s sponsor, suddenly withdrew the resolution before a planned vote on Nov. 5. The Iranian proposal closely resembled the language contained in the draft review conference document. It called for a discussion on advancing nuclear disarmament and would have operated on the basis of consensus.

In a statement explaining the decision to withdraw the resolution, Iran said the nuclear-weapon states were unwilling “to commit themselves to a consensus-based and inclusive” working group approach.

In an e-mail exchange last month, Blake Narendra, a U.S. State Department spokesman, said that although there were “some aspects” of the resolution “with which the United States could not associate,” Washington “would not have opposed this resolution, had it come to a vote.”

A source knowledgeable about the proceedings at the First Committee said last month that Iran withdrew the resolution because it was unable to gather enough support for its draft from other countries in the Non-Aligned Movement, of which Iran is a member.

The General Assembly last established an open-ended working group on nuclear disarmament in 2012. (See ACT, December 2012.) In that group, which met in Geneva in August 2013, about 80 states discussed ways to advance multilateral disarmament negotiations, but the nuclear-weapon states declined to participate. The group produced a final report that summarized the content of the discussion.

Narendra said that “[t]he U.S. decision to participate will depend upon how the Open Ended Working Group...is structured and will operate.”

He added that the United States would welcome the opportunity to participate in a working group that provides for “consensus recommendations on effective measures to advance nuclear disarmament.”

The Latvian government, which opposed the Mexican resolution, said in a Nov. 20 e-mail to Arms Control Today that it had not decided whether to participate in the new working group. In the e-mail, a Latvian Foreign Ministry representative said the working group “should be set up in a manner that would be supported by the broadest number of states, including the nuclear-weapon states.”

In a separate Nov. 20 e-mail, the Dutch Foreign Ministry said the Netherlands believes “the mandate of the working group should be as broad as possible and foster a productive dialogue to identify measures and instruments to achieve progress on nuclear disarmament.” The Netherlands, which abstained on the Mexican resolution, will participate in the working group, the e-mail said.

In a Nov. 16 e-mail, Alexander Kmentt, director of disarmament, arms control, and nonproliferation in the Austrian Federal Ministry for Europe, Integration and Foreign Affairs, said the working group “will clearly not negotiate a legally binding instrument” on nuclear disarmament or bind participants to a particular outcome. Austria was a co-sponsor of the Mexican resolution that created the working group.

In Austria’s view, Kmentt said, the working group has a broad mandate that focuses on two tracks. The first track allows for a thorough discussion on the “pros and cons” and “feasibility” of different proposals on “effective legal measures, legal provisions, and norms.” The second track would focus on other aspects that are important for advancing multilateral nuclear disarmament negotiations, such as risk reduction and transparency, he said.

Kmentt added that no single country or small group of countries should be able to “block the discussion from taking place on procedural grounds” and that the working group should “produce a substantive report that reflects truly what was presented and discussed and possible recommendations.”

He said it would be a bad sign if the nuclear-weapon states did not participate out of concern that they could not “control the discourse” and because they insist on the rule of consensus. That rule is partly responsible for the dysfunction of established disarmament forums, he said.

In an indication of the potential larger impact of the First Committee debate, Benno Laggner, the head of the division for security policy in the Swiss Federal Department of Foreign Affairs, told the attendees at the 2015 European Union Non-Proliferation and Disarmament Conference on Nov. 12 that the resolutions that were debated in the First Committee made support for the humanitarian initiative “even more fragmented.”

Many of the states associated with the initiative co-sponsored three resolutions at the First Committee this year stressing the catastrophic impacts that would ensue from the use of nuclear weapons and the urgent need for states to take effective measures, including legally binding measures, to eliminate and prohibit nuclear weapons (see box).

Although each resolution garnered the support of the vast majority of states, the nuclear-weapon states opposed all three resolutions, as did most members of NATO and U.S. allies in East Asia.

The fate this year of the resolution offered annually by Japan reaffirming the “unequivocal undertaking” of the nuclear-weapon states to meet their NPT Article VI commitment and eliminate their nuclear arsenals also illustrated the growing divide.

In the e-mail exchange, Narendra declined to comment on the specific factors that caused the United States to change its position on the resolution, saying only that “[t]his year we did not feel we could support the resolution.”

Gaukhar Mukhatzhanova of the James Martin Center for Nonproliferation Studies said at the EU conference on Nov. 12 that the vote on the Japan resolution highlights the disappearing “middle ground” on nuclear disarmament.