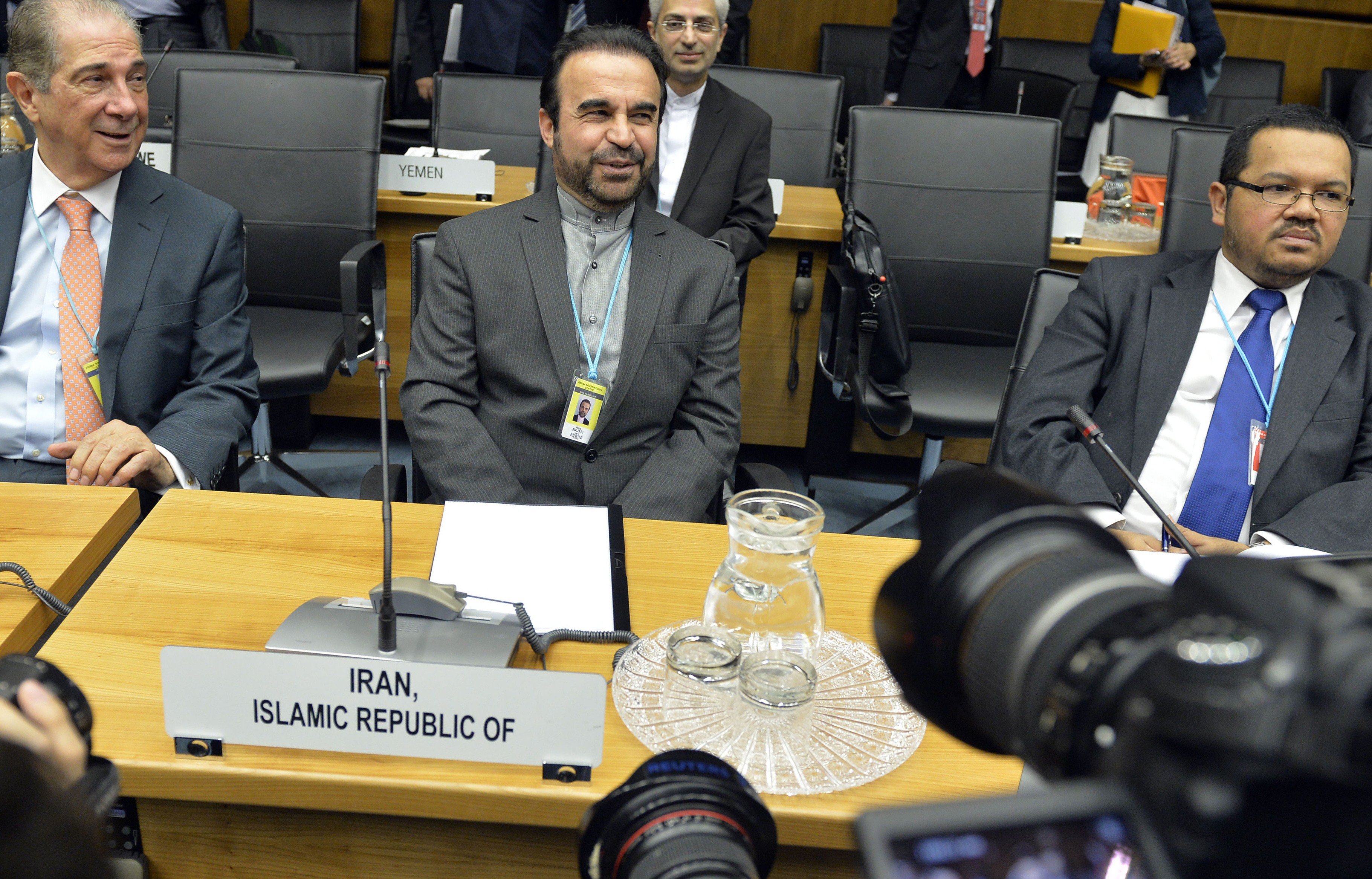 Iran began dismantling centrifuges to comply with the restrictions on its nuclear program laid out in the July 14 agreement with six countries, the organization charged with overseeing worldwide peaceful nuclear activities reported last month.

In its quarterly report on Iran’s nuclear program, the International Atomic Energy Agency (IAEA) said that, between Oct. 18 and the report’s completion on Nov. 18, Iran had dismantled 4,530 centrifuges.

Iran’s ambassador to the IAEA, Reza Najafi, told reporters on Nov. 19 that the report demonstrates that Iran’s nuclear activities are peaceful and the country is fulfilling its commitments under the nuclear agreement, formally known as the Joint Comprehensive Plan of Action.

The centrifuge dismantlement began after the nuclear agreement between Iran and the six-country group known as the P5+1 (China, France, Germany, Russia, the United Kingdom, and the United States) was formally adopted on Oct. 18.

The majority (4,112) of the dismantled machines were first-generation centrifuges at the Natanz enrichment plant, according to the IAEA report.

The IAEA also reported that Iran dismantled 160 second-generation IR-2M centrifuges from Natanz and 258 first-generation machines at the Fordow enrichment plant. None of the centrifuges removed from Natanz or Fordow had been enriching uranium, according to the agency.

Under the terms of the nuclear deal, Tehran will reduce its total number of installed centrifuges from more than 19,000 to 6,104 first-generation centrifuges, of which 5,060 will enrich uranium to reactor-grade levels at Natanz. The remaining 1,044 machines will be at Fordow, which will be converted to an isotope research center.

All of the dismantled machines will be stored at Natanz under IAEA surveillance.

The IAEA report noted that the agency also began preparatory activities for additional monitoring and verification of Iran’s commitments under the nuclear deal. These measures include continuous monitoring of Iran’s centrifuge manufacturing areas and uranium mines and mills. (See ACT, September 2015.)

Dismantling excess centrifuges is just one of several steps that Iran must complete before the nuclear deal is fully implemented and Tehran receives sanctions relief.

Under the terms of the deal, Iran also must remove and disable the core of the partially completed heavy-water reactor at Arak, which would produce up to two weapons’ worth of plutonium per year, and reduce the country’s stockpile of uranium enriched to reactor grade (3.67 percent uranium-235) to 300 kilograms.

Iranian Supreme Leader Ayatollah Ali Khamenei said on Oct. 21 that Iran would not take steps to remove the core of the Arak reactor or ship out the stockpile of enriched uranium until “the possible military dimensions file is closed.”

Under the nuclear deal, Iran will not receive sanctions relief until the IAEA certifies that Tehran has fulfilled its obligations.

Najafi said on Nov. 17 that the P5+1 knows that “the condition for implementation” of the nuclear deal in Iran is the “closing of the [possible military dimensions] issue.”

IAEA Director-General Yukiya Amano is expected to issue a report assessing Iran’s past work allegedly related to nuclear weapons development, known as possible military dimensions, ahead of a Dec. 15 meeting of the agency’s Board of Governors.

The IAEA laid out its concerns about this work in an annex to its November 2011 quarterly report. (See ACT, December 2011.) Iran maintains its nuclear program is entirely peaceful.

Amano said on Oct. 15 that Iran and the IAEA had completed all activities necessary for the agency to finish its investigation and issue an assessment.

Ariane Tabatabai, a visiting assistant professor at Georgetown University who has closely followed the negotiations on the deal, said in a Nov. 19 e-mail that, in spite of Khamenei’s comments, she doubts the IAEA report on the alleged weapons work will have an impact on Iran fulfilling its commitments. She said Iranian leaders “ultimately see it as in their interest to take steps to receive sanctions relief sooner than later.” She characterized Khamenei’s remarks as “posturing” in an attempt “to appear strong and unwilling to make compromises.”

Tabatabai said two main factors are driving his call for a delay until Dec. 15 in work on modifying the Arak reactor and shipping out the enriched uranium. The nuclear deal was a “tough sell to the more conservative factions” in the Iranian political system, and Khamenei wants to “make sure they remain on board,” she said. Also, she said, with the internal escalation of tension between factions ahead of parliamentary elections in early 2016, Khamenei is trying to “make sure he keeps everything under control.”

The IAEA’s most recent quarterly report did not indicate any activity at the Arak reactor. The report said Iran’s stockpile of enriched uranium grew by 490 kilograms since the agency’s August report on the Iranian nuclear program. Iran now has 8,305 kilograms of reactor-grade material in gas form and 2,330 kilograms in powder form, the report said.

In a Nov. 11 speech at an EU conference in Brussels, Amano said the agency’s job as a “technical organization” is to “establish the facts.”

The IAEA report on the alleged weapons work will be “factual, objective, and impartial.” He said it would be up to the IAEA member states to “determine the appropriate response.”

Speaking at the same conference on Nov. 12, Laura Rockwood, former section head for nonproliferation and policymaking at the IAEA Office of Legal Affairs, said she remains “doubtful that the agency will be provided with sufficient substantive information” by Iran to fully resolve the outstanding issues.

Rockwood, now the executive director of the Vienna Center for Disarmament and Non-Proliferation, said she thought the most likely formulation in the upcoming report will be that the “information provided by Iran is consistent or not inconsistent with the agency’s findings or other information available to it.”

Although some issues might be resolved, the report will likely not signal “an immediate return to routine safeguards” in Iran, but rather that the IAEA board will have a “continuing interest in oversight” of the agency’s work in Iran, she said.

Although Iran has not yet removed the core of the Arak reactor, progress is being made on the redesign plan for the modified reactor, according to Iranian and U.S. officials.

Under the July 14 agreement, Iran is required to use a new reactor core that will produce significantly less plutonium than if the reactor were completed as originally designed.

Iranian Deputy Foreign Minister Abbas Araqchi said on Nov. 16 that the plan for the redesign was complete and that Iran and the European Union, which headed the P5+1 negotiating team, had endorsed the document. Iran, China, and the United States worked together on the initial plan for modifying the reactor.

Behrouz Kamalvandi, spokesman for the Atomic Energy Organization of Iran, said in early November that four of the P5+1 countries would cooperate to supply Iran with advanced equipment for the reactor and other nuclear facilities and activities under the deal. He did not specify which four countries are involved.

China is to work with Iran on the ground to complete the reactor conversion.