Two nations accused of using chemical weapons recently were the focus of discussion by states-parties at the annual conference of the Chemical Weapons Convention (CWC) in late 2020. Official findings that Syria was responsible for chemical attacks during its civil war in 2017 and international assessments that Russia poisoned a political opposition leader in August 2020 have highlighted the need to strengthen implementation of the treaty, said Fernando Arias, director-general of the governing Organisation for the Prohibition of Chemical Weapons (OPCW). 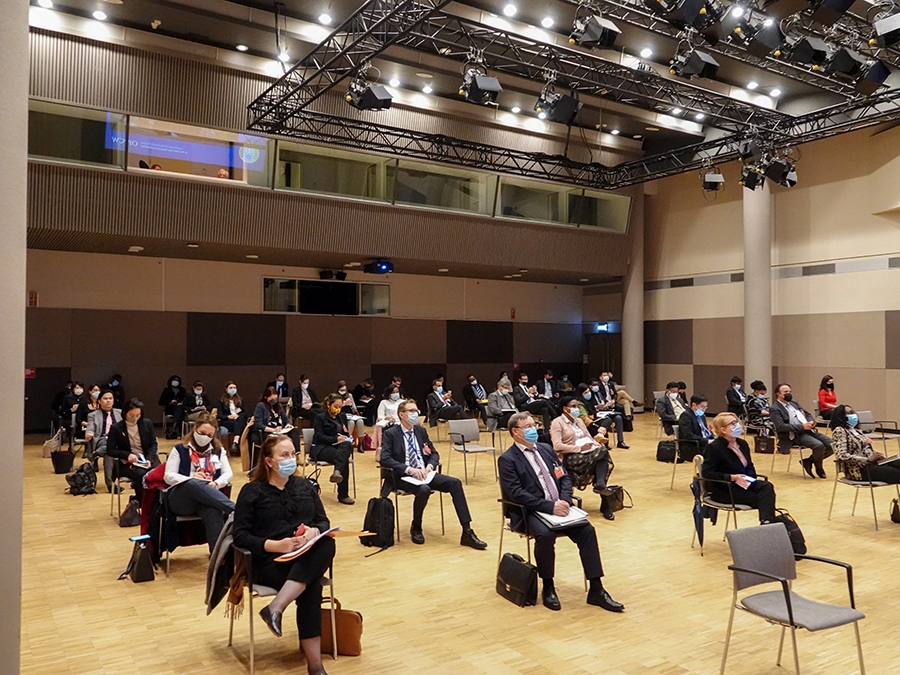 “The world is not the same place as the one of 1993, when the convention was signed. It is a more polarized place, where progress in demilitarization and nonproliferation is constantly threatened, and the efforts of the international community to live in a safer place are compromised,” he said on the opening day of the annual conference of states-parties.

The conference enables the 193 CWC members to discuss the treaty’s implementation and review ongoing efforts to strengthen the global norm against chemical weapons. Originally scheduled to be held as a single session the first week of December, the conference was divided into two parts in light of the COVID-19 pandemic. The first sessions convened at The Hague from Nov. 30 to Dec. 1, and the second session is scheduled to meet in the spring of 2021.

In April, the OPCW Investigation and Identification Team (IIT) concluded that the Syrian government was responsible for the use of sarin and chlorine in a series of attacks in Syria in 2017. (See ACT, May 2020.) The OPCW Executive Council reached a decision in July on Syria’s chemical weapons program, calling on Damascus to return to compliance with its treaty obligations by declaring the totality of its chemical weapons program and resolving all outstanding discrepancies to its initial stockpile declaration. (See ACT, September 2020.)

Syria failed to meet that deadline. According to Arias, while the OPCW Declaration Assessment Team “collected samples [and] verified the destruction of items previously observed as undestroyed” in late September and early October, 19 issues remain outstanding. “At this stage, considering the gaps, inconsistencies, and discrepancies that remain unresolved, the declaration submitted by the Syrian Arab Republic still cannot be considered accurate and complete,” Arias said.

In his statement submitted to the conference Nov. 27, French Ambassador Luis Vassy called on the conference of states-parties to suspend Syria’s rights and privileges in the decision-making bodies of the OPCW. The potential for such action was outlined by the Executive Council’s July 9 decision, which stated that a failure by Syria to meet the 90-day deadline could result in a conference decision to take action pursuant to CWC article XII. Article XII, titled “Measures to Redress a Situation and to Ensure Compliance, Including Sanctions,” outlines that the conference may restrict or suspend a state-party’s rights and privileges under the CWC until it conforms with its obligations under the treaty.

Vassy said that 46 states from four regional groups co-sponsored France’s statement calling to suspend Syria’s rights and privileges. The conference of states-parties is expected to continue those discussions during its second session in 2021.

Arias also addressed the poisoning of Navalny, a Russian political activist who was poisoned on a domestic flight in Russia. The OPCW collected biomedical samples from Navalny in September and determined he had been exposed to a toxic chemical of the Novichok family. Novichok is a form of nerve agent, and certain Novichok agents are included on the CWC Schedule 1 annex on chemicals, demarcating those expressly banned by the treaty. But whether the Navalny compound was on the list is immaterial, Arias said.

“The poisoning of an individual through the use of any nerve agent is a use of a chemical weapon, whether or not this chemical is included in Schedule 1 of the annex,” Arias said.

A group of 58 states-parties released a joint statement Dec. 2 condemning the use of a toxic chemical as a weapon and remarking that “the Russian Federation has provided no further information on its findings ahead of this conference commencing.”

Navalny, who survived the assassination attempt, shared his suspicion Oct. 1 that the Kremlin, specifically Russian President Vladimir Putin, was behind the attack. Russia has denied involvement in the case. In their statement to the conference of states-parties submitted Nov. 27, the Russian delegation suggested that efforts to investigate Navalny’s poisoning by the OPCW and Germany and other European states demonstrated an “intention to use this international organization to exert political and sanction pressure on the Russian Federation.”

Denying that Navalny was poisoned, the Russian delegation called the incident “a verbal propagandistic stunt.”

The OPCW investigation into the poisoning is not yet complete. In October, Russia submitted a request to the OPCW for technical assistance. According to Arias, the OPCW is working closely with Moscow to define the legal, technical, operational, and logistical parameters for investigating the Navalny attack.

In other business, 29 states-parties also issued a joint statement Nov. 27 calling on the conference to take action on the use of chemical agents for law enforcement purposes, as riot control agents. Their statement makes note of an October 2019 draft document submitted to the Executive Council calling on the council to recommend that the conference of states-parties recognize inconsistencies between the spirit of the CWC and the use of riot control agents.

By reaffirming that understanding, the statement outlines, “states-parties will make clear that countries may not hide their work to advance an offensive capability regarding aerosolized [central nervous system]-acting chemicals under the guise of doing so for law enforcement as a ‘purpose not prohibited’ by the CWC.”

“If adopted, the proposed decision would contribute to preventing the use of aerosolized [central nervous system]-acting chemicals for offensive purposes by state and non-state actors. Such an effort benefits all [s]tates-parties,” the statement said.