Authored by Kelsey Davenport on July 2, 2019

U.S. President Donald Trump and North Korean Leader Kim Jong Un met at the demilitarized zone (DMZ) separating North and South Korea June 30 and agreed to restart negotiations on denuclearization and peacebuilding in the region. Trump was in South Korea for talks with President Moon Jae-in and had planned to visit the DMZ, but his invitation to Kim to meet at the border was publicly announced in a last-minute tweet June 28. 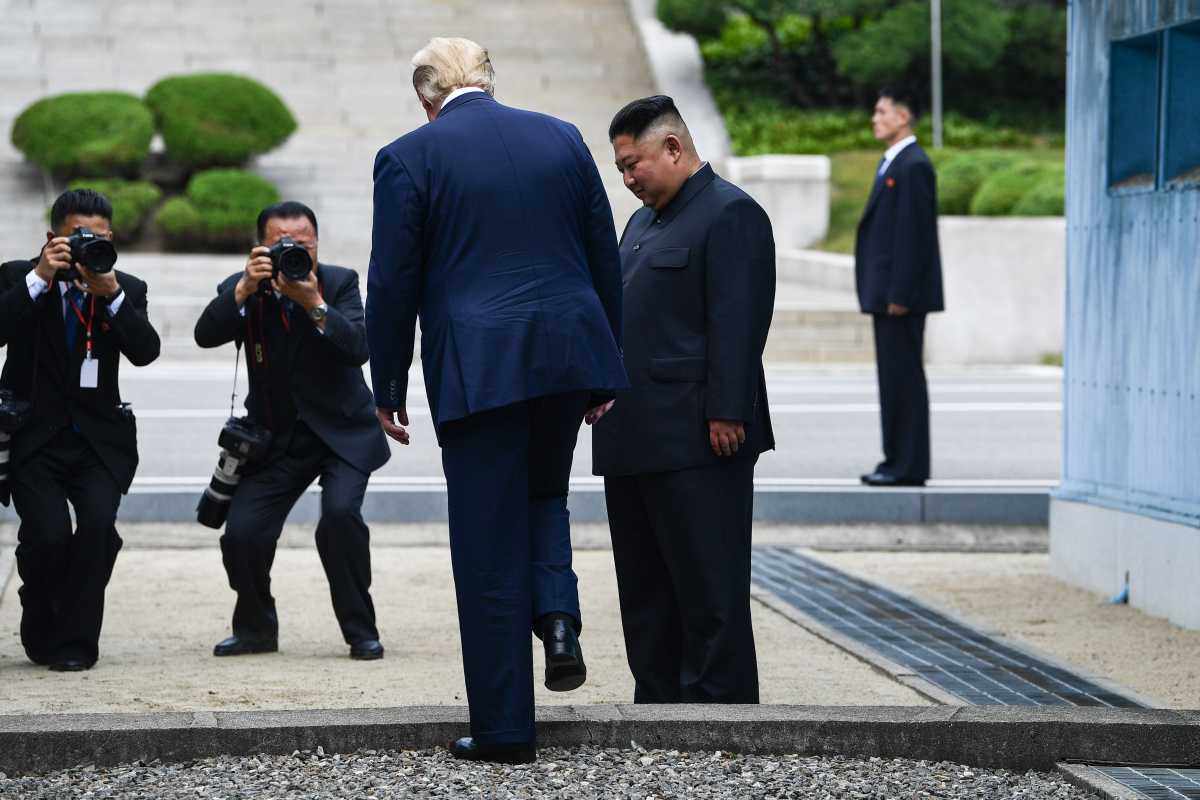 It is unclear if the impromptu meeting, which included Moon, will actually put negotiations back on track. Trump and Kim said their negotiating teams would meet in the next few weeks to resume talks, which have been stalled since the Hanoi summit in February, but did not specify a date.

U.S. Secretary of State Mike Pompeo, who was present at the meeting, said the working-level meetings will likely begin in mid-July and expressed optimism for progress, noting that Kim “really wants to get something done, something very significant.” Pompeo said U.S. Special Representative for North Korea Stephen Biegun will continue leading the U.S. team. It is not clear yet who will head negotiations for North Korea or if the team will be empowered to discuss denuclearization in detail. Ahead of the Hanoi summit, the North Korean team had little latitude for negotiating on North Korea’s nuclear weapons program.

After meeting with Kim, Trump told reporters that “a lot of progress has been made” and that everything is now “extremely peaceful” and that “tremendous conflict and death” had ended.

While Trump described the negotiating process to date as a success, talks have yet to yield concrete steps toward verifiable dismantlement of North Korea’s nuclear weapons program, and over the past year, Pyongyang has continued to produce fissile material and expand its nuclear arsenal.

Kim said the meeting was a “courageous and determined act” by Trump and it “means that we want to bring an end to the unpleasant past and try to create a new future.”

After the Hanoi summit, it appeared that Kim was reassessing North Korea’s approach to the negotiations and looking for a face-saving gesture from the United States after he failed to secure sanctions relief during the Hanoi meeting. Trump’s last-minute invitation to meet with Kim at the border and then crossing into North Korea—a first for a sitting U.S. president—may have been the symbolic gesture Kim needed to agree to resume talks. Trump said that stepping into North Korea was “a great honor.”

North Korean state-run news agencies reported the meeting as “historic” and said the two sides agreed to pursue “productive dialogue to make a new breakthrough in the denuclearization of the Korean peninsula” and in the U.S.-North Korean relationship. The media also reported in North Korea that Trump and Kim discussed the concerns that were “an obstacle in resolving the issues.”

North Korea has specified that the U.S. refusal to put sanctions relief on the table earlier in the process is unacceptable and wants negotiations to proceed step-by-step.

The Trump administration’s approach through the Hanoi summit required agreement on the end state of denuclearization, before engaging in incremental steps toward verifiable denuclearization and peacebuilding. The New York Times, however, is reporting that the administration is considering an adjustment in their approach, which may include accepting a freeze on North Korea’s nuclear program as an interim step toward a comprehensive deal. But Trump officials are split on whether to do so.—KELSEY DAVENPORT, director for nonproliferation policy

In a June 26 interview with several press outlets, South Korean President Moon Jae-in called for the United States and North Korea to take reciprocal steps to advance negotiations. “The North should scrap its nuclear program, and the United States should provide conducive conditions by taking reciprocal measures,” he said. 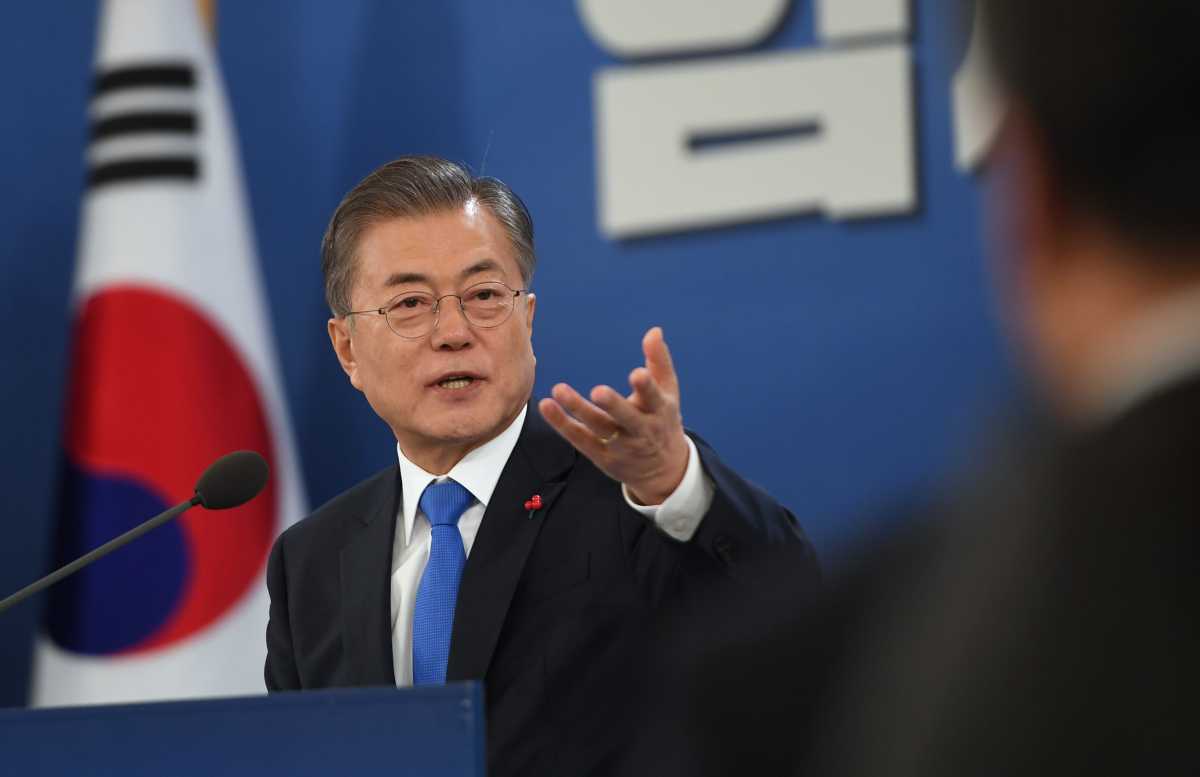 Moon suggested that inter-Korean economic projects could be “utilized as corresponding measures to induce the North to take denuclearization steps.” He said such steps would not be “economic concessions” for North Korea.

Moon has outlined plans for several inter-Korean projects during past meetings with Kim. However, the Trump administration has been reluctant to grant sanctions waivers necessary for the projects to move forward, stymieing progress on the North-South dialogue.

Moon also stated in the interview that if North Korea dismantled the Yongbyon nuclear complex, “including the plutonium reprocessing facilities and the uranium enrichment facilities,” then it “would be possible to say that denuclearization of North Korea has entered an irreversible stage.” Moon’s reference to "irreversible" is interesting, as he stated October 2018 that UN sanctions relief for North Korea should be considered once the country took “irreversible” steps toward denuclearization. At that time, he did define what would constitute “irreversible.” He made a similar reference later in the June interview, stating that if “substantive progress” is made on denuclearization, it could “help the international community seek a partial or gradual easing of the U.N. Security Council sanctions.”

North Korea sought relief from UN sanctions at the Hanoi summit in exchange for steps on dismantling facilities at Yongbyon and codification of the long-range missile and nuclear test moratorium. Trump rejected that offer.

Chinese President Xi Jinping traveled to Pyongyang for the first time to meet with North Korean leader Kim Jong Un. The meeting was the fifth between the two leaders and appeared to focus on economic development and expanding cooperation between the two countries. 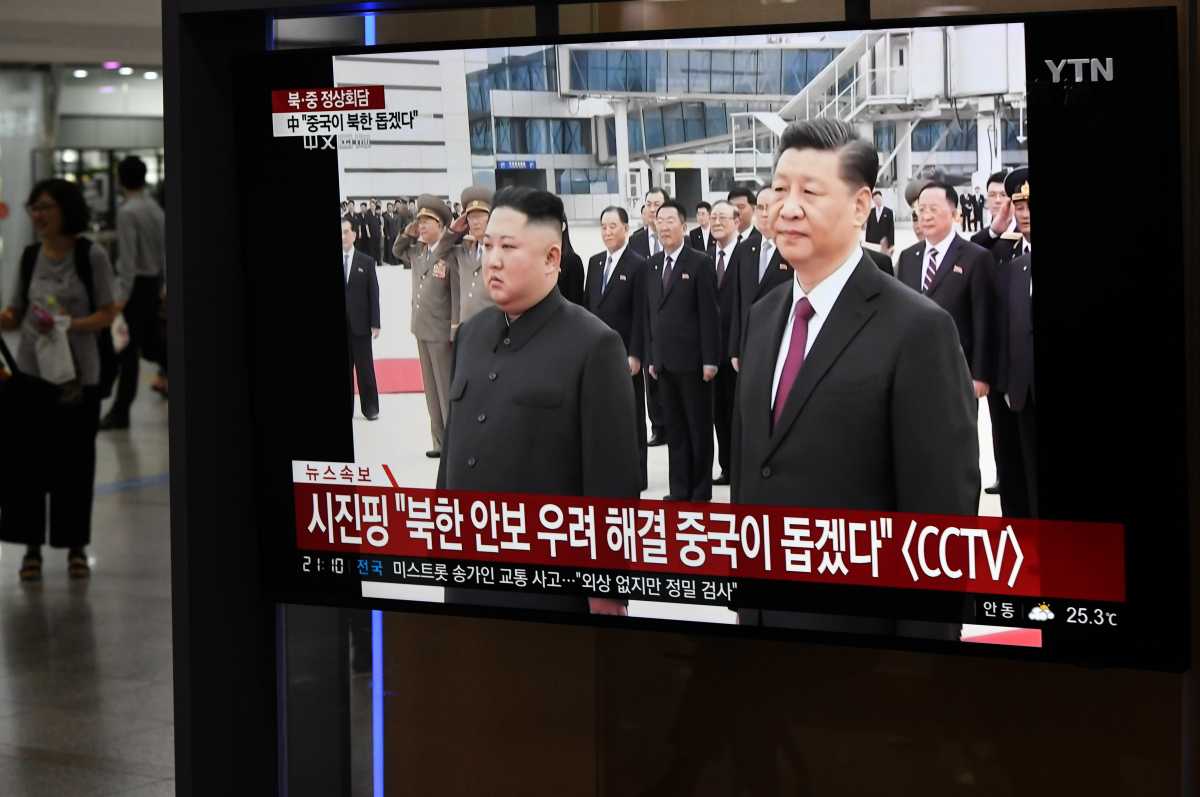 The official statements released after the talks contained few references to denuclearization, but according to a June 20 readout of the meetings from China’s Foreign Ministry, Xi referenced North Korea’s efforts to “safeguard peace and stability on the Korean Peninsula and promote the denuclearization of the Peninsula.”

Xi also praised North Korea’s “active measures to avoid tension” and expressed concern that North Korea has not received “a positive response from the concerned side,” likely referring to the Trump administration’s reluctance to pursue an incremental approach to denuclearization and peacebuilding.

The Chinese statement reported that Kim said North Korea is “willing to stay patient” and hopes that the other party will meet North Korea “halfway to seek solutions that accommodate each other’s legitimate concerns.”

Xi’s visit to Pyongyang came ahead of the G-20 summit and his bilateral meeting with Trump. The timing of the visit could have been motivated in part to remind Washington that China has influence in North Korea and should play a role in negotiations going forward or to gain leverage ahead of trade talks with Trump. Chinese Foreign Ministry spokesman Lu Kang denied that the trade talks and the North Korea summit were connected.

Before his arrival, Xi published an op-ed in North Korea’ Rodong Sinmun, the official paper of the state party, outlining a “grand plan” for permanent peace in the region. The piece emphasized the importance of expanding cooperation and strategic communication between China and North Korea. It did not reference denuclearization.

North Korea’s Foreign Ministry said the U.S. decision to extend sanctions against Pyongyang is “nothing less than the product of the heinous policy hostile to us.” The June 26 statement described the decision as “an outright challenge” to the joint statement adopted by U.S. President Donald Trump and North Korean leader Kim Jong Un during the Singapore summit and said it speaks to the “wild dream of the U.S. to bring us to our knees by means of sanctions and pressure.” The statement said North Korea “is not a country that will surrender to the U.S. sanctions.” 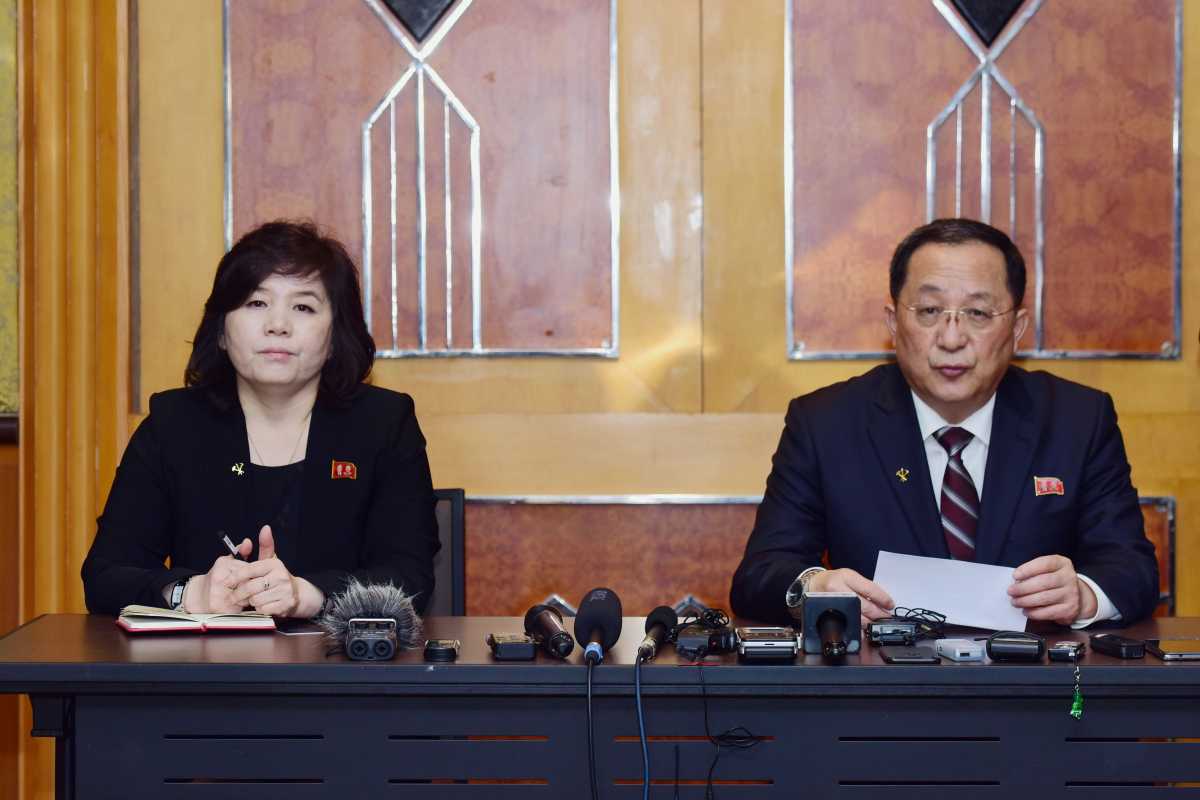 The Trump administration notified Congress of a one-year extension of sanctions outlined in six executive orders, originally set to expire June 26. In the notification, Trump cited North Korea’s “risk of proliferation of weapons-usable fissile material” and “actions and policies” that “pose an unusual and extraordinary threat to the national security, foreign policy, and economy of the United States.” The executive orders were signed between 2010-2017, largely in response to illicit nuclear and ballistic missile activities.

The Nuclear Threat Initiative released a report in June detailing how the United States could pursue a Cooperative Threat Reduction (CTR) program with North Korea to enhance the prospects for comprehensive, verifiable denuclearization. CTR was established by U.S. legislation spearheaded by former Senators Sam Nunn and Richard Lugar in 1991 to facilitate financial and technical assistance to secure and dismantle weapons of mass destruction (WMD), production facilities, and delivery systems in former Soviet states. 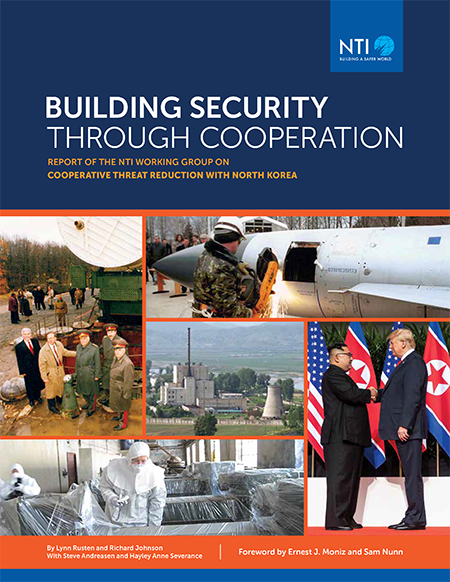 Report authors Lynn Rusten and Richard Johnson write that a CTR program “would facilitate the dismantlement of the DPRK’s nuclear and other WMD programs and incentivize North Korea to take those dismantlement steps in return for technical and economic assistance on denuclearization and WMD threat reduction activities and to help redirect human and technical resources to civilian economic development.”

The report suggests a number of areas of potential cooperation, including:

Rusten and Johnson also highlight that involving North Korean scientists in the dismantlement processes is “highly preferable to a unilateral, uncooperative, or imposed approach” and can create relationships that provide greater transparency and opportunities for further collaboration.