The second summit between U.S. President Donald Trump and North Korean leader Kim Jong Un ended abruptly Feb. 28 in Hanoi without agreement on the next steps to advance denuclearization and peace-building on the Korean peninsula. 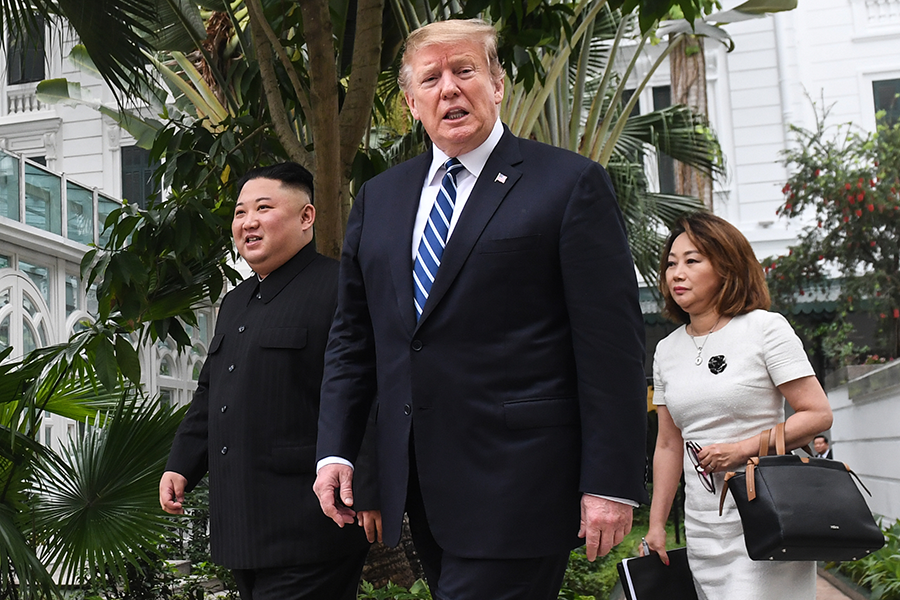 “I’d much rather do it right than do it fast,” Trump told reporters following the meeting, but he did not provide any details on the next steps in the negotiating process.

Trump attributed the meeting’s failure to North Korea’s demand for U.S. sanctions to be lifted “in their entirety” in return for just a partial rollback of North Korea’s nuclear program. The United States “couldn’t
give up all of the sanctions for that,” Trump said, so he “had to walk away.” It is unclear if this gap over sanctions relief between the United States and North Korea existed in the lead up to summit meeting, or if Trump or Kim insisted on last-minute changes.

North Korean Foreign Minister Ri Yong Ho disputed Trump’s characterization of the summit at a March 1 press conference. He said North Korea had asked for “partial” removal of sanctions that “hamper the civilian economy and the livelihood or our people” in exchange for the permanent dismantlement of all nuclear material production facilities at the Yongbyon nuclear complex in the presence of U.S. experts, but the United States demanded “one more measure.”

He warned that Kim may have lost “the will” to continue negotiations.

Despite the setback, Trump expressed optimism for reaching an agreement with Kim in the future, citing “a warmth that we have.” Trump said the two nations would continue the conciliatory measures each adopted last year: North Korea would maintain its moratorium on testing missiles and nuclear weapons announced in April, and the United States would continue to suspend or modify military exercises with South Korea that Pyongyang finds provocative. The testing moratorium prevents North Korea from making certain qualitative advancements to its nuclear warhead designs and ballistic missiles, but Pyongyang is free to continue expanding its arsenal as
talks continue.

The summit’s failure to produce a concrete outcome is not surprising. Talks stalled for several months after the June 2018 Singapore summit, and negotiating teams had little time to prepare for the Feb. 27–28 meeting in Hanoi. Ahead of the meeting, U.S. officials downplayed expectations, but did include a signing ceremony in the summit schedule.

U.S. Secretary of State Mike Pompeo implied that the U.S. and North Korean negotiating teams had failed to resolve all of the differences between the two countries ahead of the Hanoi meetings. Speaking at the post-summit press conference with Trump, Pompeo said that “we made even more progress when the two leaders met over the last 24, 36 hours,” but Kim was “unprepared” to do more. Pompeo said that progress made at the summit puts the United States “in a position to get a really good outcome,” but he did not provide any details on plans for follow-up talks.

Trump did not provide any details on what denuclearization steps North Korea was willing to take, but the offer likely involved the dismantlement of the Yongbyon complex that houses the nuclear reactor that North Korea uses to produce plutonium for nuclear weapons and a uranium enrichment facility.

Initially, the Trump administration emphasized that North Korea would not receive any sanctions relief until the denuclearization process was complete. This strategy, which front-loaded North Korean commitments early in the process, contributed to the stalemate in negotiations after the Singapore summit.

In the last several months, however, U.S. officials appear to have shifted their approach and eased up on requiring that North Korea fully and verifiably dismantle its nuclear weapons program prior to receiving any relief. Pompeo said Feb. 21 that sanctions could be eased if North Korea “substantially reduced” its nuclear program.

An agreement exchanging limited sanctions relief for a verifiable halt to fissile material production and the dismantlement of facilities at Yongbyon would have been a significant step toward denuclearization, but North Korea maintains a number of covert sites that
are part of its nuclear weapons program. In his press conference, for example, Trump alluded to an additional North Korean uranium enrichment facility. “I think they were surprised we knew” about the site, he said.

If the United States had lifted all sanctions in return for only partial dismantlement of select sites, the Trump administration would have far less leverage to negotiate the remaining steps necessary for complete, verifiable denuclearization.

Moon described the summit outcome as “unfortunate” on Feb. 28, but expressed hope that dialogue will continue. He also said that South Korea will “do all it can to ensure that the United States and North Korea can maintain momentum for dialogue while continuing their close communication and cooperation.” In the end, Trump remained hopeful for future progress. “This wasn't a walk-away, like you get up and walk out,” he said.
“No, this was very friendly. We shook hands.”