“The Arms Control Association and all of the staff I've worked with over the years … have this ability to speak truth to power in a wide variety of venues.”
– Marylia Kelley
Tri-Valley Communities Against a Radioactive Environment
June 2, 2022
What You Need to Know About Chemical Weapons Use in Syria

Authored by Alicia Sanders-Zakre on September 23, 2018

Why are chemical weapons attacks in Syria of so much concern to the international community?

Over the course of the horrific five and a half years of the Syrian civil war, the government of Bashar al-Assad, his Russian allies, and extremist fighters, have committed numerous war crimes. Some 500,000 people have died, and more than 10 million have been displaced. There is no military solution to the conflict, yet the killing continues.

Among the most heinous aspects of the war has been the repeated use of chemical weapons by the Assad regime since late 2012, including the massive August 2013 sarin gas attack that killed more than 1,400 civilians in the Damascus suburb of Ghouta.

Chemical weapons are uniquely terrifying weapons of mass destruction. Exposure to sarin gas, a colorless, odorless nerve agent used repeatedly in Syria, leads to muscle twitches, unconsciousness, paralysis of respiratory organs and eventually a horrifying, death through asphyxiation. It is because of their inhumane effects, as well as the fact that chemical weapons do not discriminate between combatants and civilians, that chemical weapons are internationally outlawed. 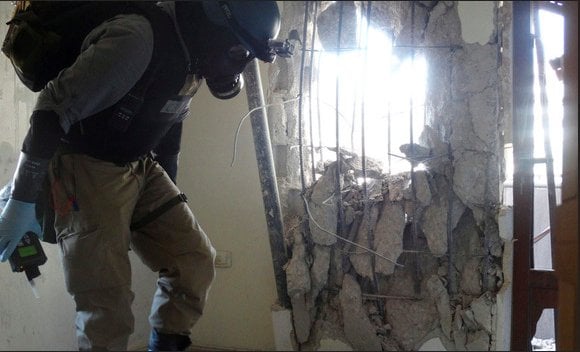 The Geneva Protocol of 1925 first limited the use of chemical weapons following their widespread use during the trench warfare of World War I. In 1980, the international community started negotiations on a comprehensive ban, which were concluded in 1993. The Chemical Weapons Convention (CWC), which entered into force in 1997, has put in place a comprehensive prohibition on chemical weapons development, production and deployment, and mandates the destruction of legacy chemical weapons. The CWC’s corresponding organization, the Organization for the Prohibition of Chemical Weapons (OPCW), oversees the destruction of all states-parties’ declared stockpiles. Today, there are 193 states-parties to the CWC, including Syria. Almost all states-parties are in good standing with the agreement.

Which types of chemical weapons have been used during the Syrian conflict?

The Syrian government has also used sarin, a highly lethal nerve agent, on multiple instances, including in August 2013 and April 2017, according to national and international investigations.

The Joint Investigative Mechanism, a now defunct investigative partnership between the United Nations and the Organization for the Prohibition of Chemical Weapons, found the Islamic State guilty of using sulfur mustard gas, including on August 2015 and September 2016.

Which actors have been found responsible for chemical weapons attacks in Syria? 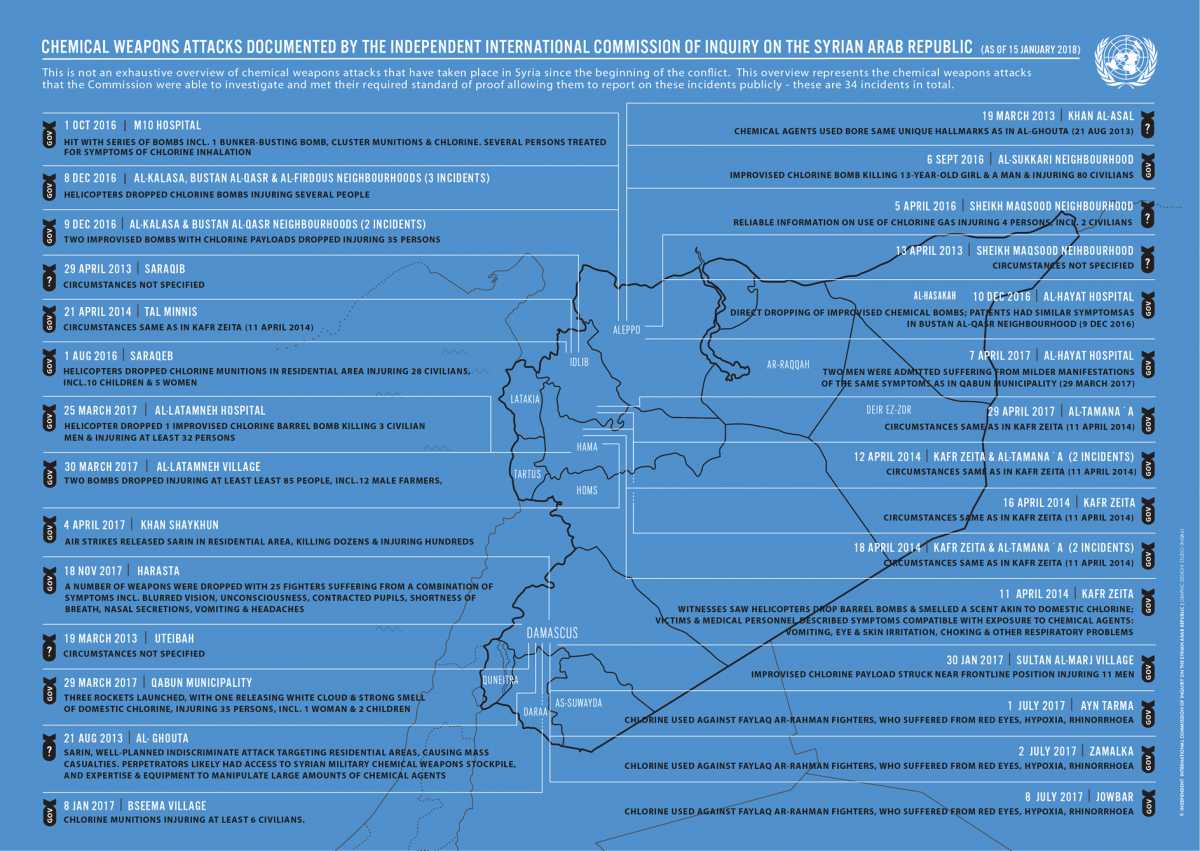 Exact estimates of how often chemical weapons have been used in Syria during the civil war are difficult. Estimating how many attacks each side has perpetuated is still more challenging in part due to the limited access of inspectors to active conflict zones. The Syrian Archive has documented 212 likely chemical attacks, but the OPCW Fact-Finding Mission has only been able to confirm 16 cases as of June 2018.

How did President Barack Obama respond to the use of chemical weapons in Syria and was the policy successful?

Obama’s ultimate response to the gruesome August 2013 attack on the outskirts of Damascus that killed over 1,400 civilians was to work with international partners and independent inspectors to remove and destroy Syrian chemical weapons.

Reports of the Assad regime’s use of chemical weapons had surfaced as early as 2011, but it was the particularly deadly attack in August 2013 that drove the United States to respond. Obama considered ordering a military strike in Syria in retaliation, but first decided to seek congressional authorization.

To avoid a military strike in Syria, Russia approached the United States proposing an international effort to identify and destroy Syria’s chemical stockpile. Obama accepted this alternative. The UN Security Council adopted a resolution codifying the plan and reserving the right to resort to military action in the event of Syrian noncompliance. Within a week, Syria declared 1,308 metric tons of sulfur mustard agent and precursor agents to the OPCW. By January 2016, the OPCW stated that it had destroyed Syria’s declared stockpile.

The removal and destruction of 1,308 metric tons of chemical agents without the use of force was a remarkable accomplishment which greatly reduced Assad’s ability to perpetrate additional large-scale chemical weapons attacks.

How did President Donald Trump respond to chemical weapons use in Syria and has his policy been effective?

The strikes were not intended to render inoperable Assad’s chemical capabilities but to deter Assad from continuing to use chemical weapons. However, responding to chemical weapon use in Syria with a one-off show of force is both risky and ineffective. It is risky because U.S. aggression in Syria threatens more civilian lives and could lead to a dangerous escalation with Russia, which is also active in the region. It is ineffective because latest U.S. retaliatory strikes have not succeeded in preventing additional chemical attacks by the Assad regime.

How is the international community, including the United Nations, responding to the repeated use of chemical weapons in Syria? Who is investigating these attacks and how can we hold perpetrators accountable?

There are a number of international bodies investigating the use of chemical weapons in Syria, although attribution and accountability gaps remain to be filled.

The Independent International Commission of Inquiry on the Syrian Arab Republic, created in 2011 by the Human Rights Council, is mandated to investigate violations of international human rights law in Syria, in close cooperation with the UN International Impartial Independent Mechanism on the Syrian Arab Republic (IIIM), established in the same year by the UN General Assembly. The commission of inquiry’s sixteenth report, released September 2018, identified four instances of chemical weapons use in Syria between January and July 2018. The commission has documented 38 chemical attacks in total, mostly perpetrated by the Syrian government.

To fill that gap, the OPCW-UN Joint Investigative Mechanism (JIM) was established by UN Security Council Resolution 2235 in 2015. The JIM had the mandate to investigate the responsible actor in instances of chemical weapons use in Syria confirmed by the Fact-Finding Mission. In its two years of operation, the JIM issued seven reports and found the Syrian government responsible for four chemical weapons attacks and the Islamic State guilty of two.

The JIM’s mandate had to be renewed by the UN Security Council every year to continue operating. In 2017, Russia vetoed the extension of its mandate and it ceased to exist. Russia claimed to be upset about the “unprofessional” manner in which inspections were conducted but in reality, it was dissatisfied with the body’s conclusions: reports that found its ally, Syria, guilty of violating international law.

In June 2018, after repeated attempts by the United States and others at the UN Security Council to establish another mechanism to attribute chemical weapons attacks, a special session of CWC states-parties voted to give the OPCW the mandate to assign blame for chemical attacks. OPCW Director-General Fernando Arias announced in March 2019 that the mechanism, the "Investigation and Identification Team" was being finalized.