Authored by Alicia Sanders-Zakre on October 3, 2017

While Russia completing the destruction of its once 40,000-metric-ton chemical weapons arsenal last week is cause for celebration, its continued denial of the Assad regime’s use of deadly chemical weapons in Syria is most certainly not. 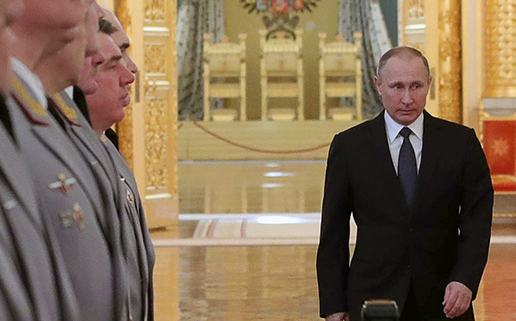 Russia, which destroyed all of its chemical weapons due to its obligation as a state-party to the 1993 Chemical Weapons Convention (CWC), nevertheless still shields the deliberate and inexcusable violation of the CWC by another state-party, Syria. Syria joined the CWC after international outrage erupted following a brutal chemical attack in a Damascus suburb in 2013.

Since Syria joined the CWC in 2013, the Assad regime has repeatedly violated its obligations as a state-party. Syria inaccurately reported its stockpile to the Organization for the Prohibition of Chemical Weapons (OPCW), the body charged with overseeing the CWC, and most egregiously, Syria is continuing to use lethal chemical agents against innocent civilians, including many children.

Despite clear evidence of Assad’s chemical weapons use, confirmed by the UN-OPCW Joint Investigative Mechanism, an independent investigative body, Russia has reiterated the Syrian government’s denial of its possession and use of chemical weapons. What’s even more unconscionable is that Russia has single-handedly blocked eight UN Security Council resolutions condemning chemical weapons use in Syria, most recently in April 2017 following the chemical weapons attack in Khan Sheikhoun which killed 92 people, nearly a third of which were children. These resolutions also would have allowed for more access for investigators in Syria to determine the culprit of additional chemical attacks.

Assad’s blatant disregard for Syria’s obligations under the treaty, and Russia’s ongoing denial of these violations, has repercussions beyond the horrific deaths and suffering caused by illegal chemical weapons attacks. It also threatens to undermine the global norm against chemical weapons use, thereby lowering the normative barrier for other states and nonstate actors to use gruesome weapons of mass destruction, an act long deemed unequivocally unacceptable by the international community.

When the UN Security Council meets again to discuss chemical weapons use in Syria, Russia should stand on the right side of history. It should join the international community in its condemnation of Assad’s reprehensible violation of his country’s commitment and should support more intrusive inspections in Syria to determine the responsible party for chemical weapons attacks and to deter their perpetuation.