“[My time at ACA] prepared me very well for the position that I took following that with the State Department, where I then implemented and helped to implement many of the policies that we tried to promote.”
– Peter Crail
Business Executive for National Security
June 2, 2022
U.S., Russia Adhering to New Start Despite War

A few days after Russia’s invasion of Ukraine, the United States and Russia exchanged data on their respective strategic nuclear forces as required by the 2010 New Strategic Arms Reduction Treaty (New START). The data shared on March 1 showed that the countries remain at or below the treaty limits on deployed strategic warheads and their delivery vehicles.

“At a time when direct contacts are being curtailed, antagonism runs high, and trust [is] completely lost, it is nothing short of amazing that Russia and the United States continue to abide by the…treaty and exchange classified information as if nothing had happened,” wrote Hans Kristensen of the Federation of American Scientists in an April 6 blog post. The data exchange was made public on April 5.

The treaty limits U.S. and Russian strategic nuclear forces to 1,550 warheads deployed on 700 delivery vehicles, which are defined as intercontinental ballistic missiles, submarine-launched ballistic missiles, and heavy bombers assigned to a nuclear mission.

Under New START, the two sides are allowed a certain number of on-site inspections each year, but those inspections have been paused since March 2020 due to the COVID-19 pandemic. Even so, the two sides have continued to exchange various notifications on the status and basing or facility assignment of their respective strategic forces, for a total of 23,609 notifications as of April 7.

The treaty’s implementing body, the Bilateral Consultative Commission, ordinarily meets twice per year, but those meetings have also been paused because of the pandemic.

Alexander Darchiyev, director of the Russian Foreign Ministry’s North American Department, said on March 8
that “we’re preparing for the upcoming spring session of the Bilateral Consultative Commission.” Further information on when the commission may convene is unknown.

The exchange of New START data occurred after Russian President Vladimir Putin’s Feb. 27 order to move his country’s nuclear forces to the heightened alert status of a “special regime of combat duty” in the early days of the Russian invasion of Ukraine. (See ACT, March 2022.) Although additional such orders have not been given, Russian officials have defended Putin’s order in the ensuing weeks. Kremlin spokesperson Dmitry Peskov eventually downplayed the threat of nuclear war in late March. (See ACT, April 2022.)

On April 20, Russia test-launched a new nuclear-capable intercontinental ballistic missile called the Sarmat. Although Putin called the test a warning to those in the West who “try to threaten our country,” some U.S. experts played down the impact saying Moscow notified Washington in advance as required under New START. The experts also estimated that SARMAT was initially slated to be operationally deployed in 2021, meaning the system is now behind schedule. 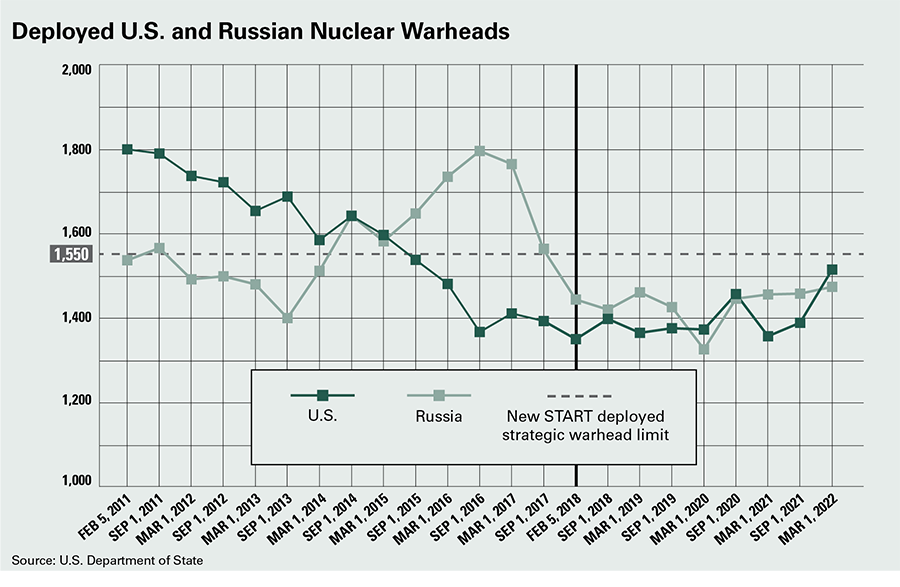