Never has a regional security framework been needed more in the Middle East than it is today. Events of the last decade—the 2011 Arab Spring, Iran’s expanding nuclear program, brutal civil wars in Yemen and Syria, and persistent terrorist activities—have prolonged tensions among regional actors. Geopolitical shifts, such as the Taliban takeover of Afghanistan and the absence of cooperation among global powers in resolving regional conflicts, have further exacerbated an unstable security environment. The result has been louder, more prevalent cries for peace by regional activists and political leaders, so far without a constructive result. 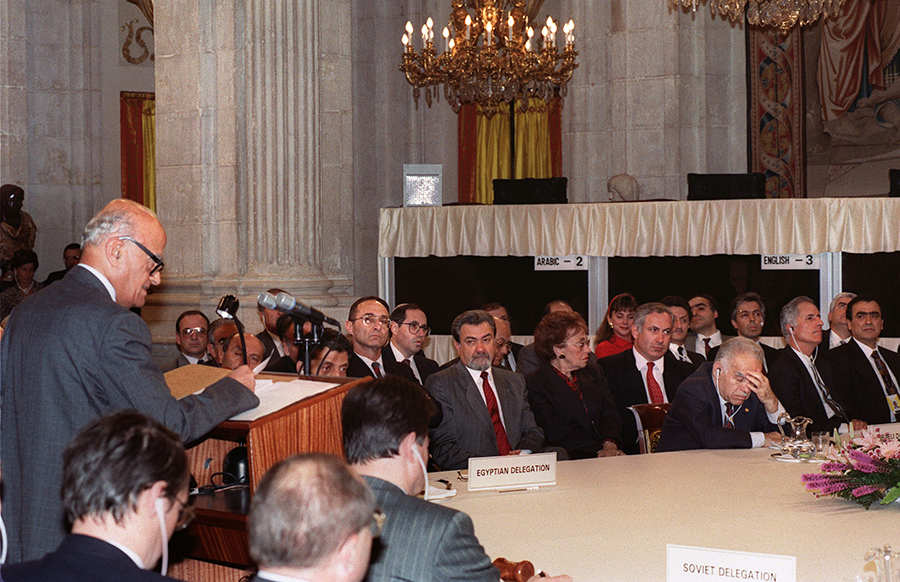 One of the biggest concerns is the proliferation of weapons of mass destruction (WMD). Although Israel is the only state in the region that has refused to sign the 1970 nuclear Nonproliferation Treaty (NPT) and is widely believed to possess nuclear weapons, several countries that signed the pact have begun to bypass its restrictions, most notably Iran with its accelerating nuclear program.1 The use of chemical weapons by the Syrian government and nonstate actors in the Syrian civil war further amplifies the risk of WMD use and the growing willingness to violate long-established international agreements and norms. For all its bruises, the NPT remains the cornerstone of the international nonproliferation regime and has created a precedent for further international arms control treaties, such as the Chemical Weapons Convention. Despite these efforts, recent negative trends highlight the acute need for a region-wide comprehensive solution to the WMD threat in the Middle East, specifically the creation of a WMD-free zone.

Today, there are six nuclear-weapon-free zones in the world in which participating states are bound by treaties that ban development, possession, testing, and transportation of nuclear weapons.2 Although a lack of sustained communication has made cooperation among member states in these zones a challenge, the overall benefits of such zones are undeniable and could improve security in the Middle East. States that commit to these agreements consent to eliminate nuclear weapons from their national security plans, making the pact mutually beneficial to all states in a particular zone. Pledging to remove nuclear weapons from their individual national defense strategies also commits states to the humanitarian goal of ridding the entire world of nuclear weapons. The aim of the international nonproliferation regime is to normalize these goals and encourage more countries to devote themselves to the effort.3

For decades, proponents of WMD-free zones have attempted to establish a similar treaty to ban nuclear weapons in the Middle East. The most recent endeavor is the Conference on the Establishment of a Middle East Zone Free of Nuclear Weapons and Other Weapons of Mass Destruction, which had its second annual session in November 2021. Despite these efforts, several obstacles have impeded the implementation of concrete measures to rid the region of weapons of mass destruction. These include Israel’s decision not to participate in the conference, stalled negotiations on reviving the 2015 Iran nuclear deal, and continued distrust and instability among countries in the region.

These difficulties should not obscure the fact that many politicians, activists, and civilians in the region agree that something needs to change to promote stability there. So, why has dialogue and significant progress stagnated? What must be done moving forward to create the conditions necessary to achieve the zone and advance overall regional security?

What the Middle East needs most is trust-building. Previous initiatives have attempted to establish security regimes with verification and confidence-building measures. This approach would be more effective for building bridges between states after ratification of an agreement. Although these measures are important to any regional security framework, they will never be implemented successfully unless regional actors first establish a shared understanding of what security looks like and overcome the mistrust that has hindered the creation of regional security institutions.

Although most countries in the region presumably share a view of a stable Middle East that is free of weapons of mass destruction and arms races, they differ in their approach to achieving these goals. These opposing positions, which include such basics as the objectives and sequencing of negotiations, can be traced back to the broader Arab-Israeli conflict that erupted after the United Nations recognized Israel as a state in 1948 and has persisted for decades.

Over the years, Israel adopted a policy of nuclear opacity, meaning it has chosen not to acknowledge publicly its nuclear weapons capabilities. Although Israel maintains that it will not “be the first to introduce nuclear weapons to the Middle East,” it is believed to have produced 100 to 200 nuclear warheads.4 Combined with the growing threat of Iran’s nuclear program, Israel’s possession of nuclear weapons increases the likelihood that other states in the region also will work to develop the bomb as a deterrent.5

These developments underscore the paradox of the differing Israeli and Arab views on nuclear deterrence policy, which have repeatedly disrupted any chance of creating a WMD-free zone. Although Israel and other regional states would benefit from such a zone, Arab states see Israel’s nuclear disarmament and its agreement to a zone as a necessary condition for regional security. Israel, however, requires regional security as a prerequisite before it signs on to any treaty that promotes disarmament and nonproliferation policies.6

These contradictory approaches have led to the collapse of many initiatives that aimed to develop a nonproliferation regime in the Middle East. Among the most notable was the arms control and regional security working group in the 1990s, which was a set of plenary dialogues with the aim of establishing a new regional security framework. Although it ultimately failed, the initiative still offers lessons that could be applied to future regional dialogues.

Lessons From the Working Group

This initiative, the most comprehensive and serious disarmament and nonproliferation initiative undertaken by the region, came about after the Cold War when the fall of the Soviet Union and the end of the Persian Gulf War created favorable geopolitical conditions for conflicting parties to negotiate a new security framework. Co-sponsored by the United States and Russia, the diplomatic effort was part of the Middle East peace process and established five working groups to address various security issues. One group, on arms control and regional security, represented the first attempt to bring Arabs and Israelis together to discuss confidence-building measures and progress toward disarmament and regional security.7 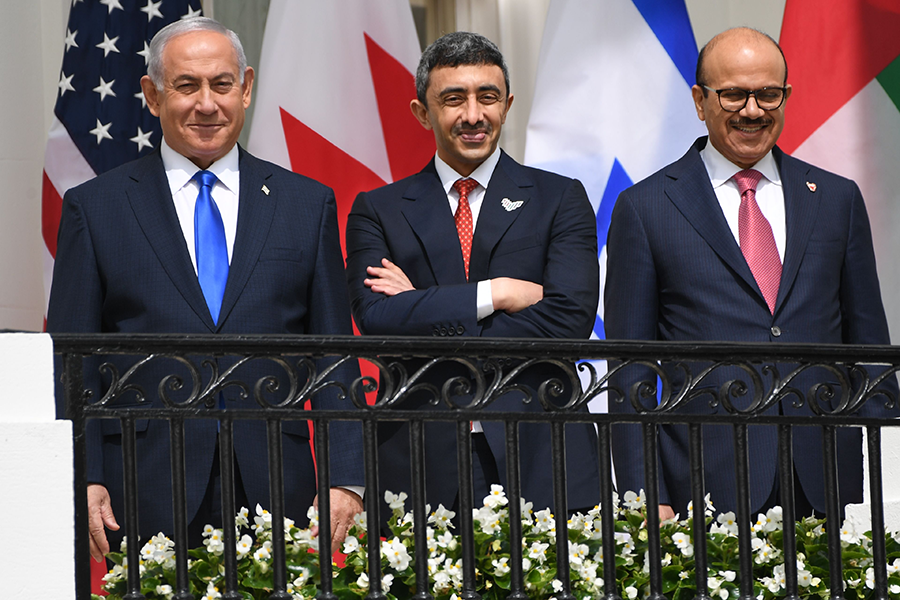 Although the initiative collapsed in 1995 due to disagreements between Israel and Egypt over nuclear disarmament issues, it had value in facilitating personal relationships among regional participants who had long viewed each other as enemies. It also produced some narrowly constructive agreements that established a regional security center in Jordan and two affiliated institutions in Qatar and Tunisia, built a regional communications network, instituted procedures for the prenotification of certain military activities and the exchange of military information, and facilitated cooperation on search and rescue missions and the prevention of incidents at sea.

During this process, diplomats were exposed to each other through a mix of Track 1 diplomacy, a traditional format that brings two or more governments into discussions on an official level, and Track 2 diplomacy, which involves informal and unofficial discussions among government officials and sometimes academics that are inherently nonbinding.8 In the Track 2 format, representatives of Egypt, Israel, Jordan, Saudi Arabia, and Tunisia and the Palestinians were able to interact outside of the formal negotiation room and get to know each other as people. As a regional official who participated in the negotiating process stated to the oral history project conducted by the Wilson Center and the Center for Nonproliferation Studies, “So, we came up with a question asking, ‘Can we just sit down one day, just relax, and have a cup of coffee and have a little talk about what’s going on, rather than the official meetings?’ So, we had our first conference meeting in the United States down in La Jolla, California... and that’s when they put us all in… and my God, it just took off.”

He said that there unsurprisingly were some “hot times,” especially on nuclear issues, but beyond that, “a lot of issues were discussed outside, having a cup of coffee, having tea, sitting here, sitting there, over dinner. And then later on, when we used to go back to the official meetings, then we kind of understood each other a bit more.”9

This experience offers a lesson to anyone seeking to address the daunting security issues that still haunt a deeply polarized Middle East. Although there were delegates who believed the arms control working group had more failures than successes, they were mostly in agreement on one fact, as another participant acknowledged to the oral history project: “I honestly don’t believe that there were any substantive successes. But I do believe…that the different parties understood that we’re all human, that we can actually discuss these things with each other.”10

Fast-forward more than two decades to the signing of the Abraham Accords by Bahrain, Israel, and the United Arab Emirates in 2020. Many of the geopolitical issues in the region and the world have changed, but clearly the possibility for dialogue and trust-building in the Middle East still exists. Although the accords ignored several key issues, most notably the Israeli-Palestinian conflict, they created a precedent as the third normalization agreement between Israel and its regional neighbors and opened the door for future dialogues on issues of peace and regional security.11

Future goals must be even bolder and aim to eliminate weapons of mass destruction and the potential for such weapons from the region. That must be one item on the agenda when the 10th NPT review conference takes place in November. Conference participants should develop a blueprint to push forward talks on a Middle Eastern WMD-free zone by encouraging the kind of personal dialogue that proved valuable in the arms control working group and by building on the goodwill of the more recent Abraham Accords.

This will not occur without the commitment of all states in the region to disarmament, particularly Iran and Israel. In addition, Iran and the United States must restore mutual compliance with the 2015 nuclear deal, which imposes limits on Iran’s nuclear activities in return for sanctions relief.

Israel may never give up its nuclear weapons, but like its neighbors, it yearns for a constructive regional security framework within which it can live in peace. One realistic preliminary step would be to have all Middle Eastern states ratify the Comprehensive Test Ban Treaty and make the region a zone free of nuclear testing. That could start a dialogue on nuclear issues and begin to build confidence among important regional actors.12

8. Jennifer Staats, Johnny Walsh, and Rosarie Tucci, “A Primer on Multi-track Diplomacy: How Does It Work?” U.S. Institute of Peace, July 31, 2019, https://www.usip.org/publications/2019/07/primer-multi-track-diplomacy-how-does-it-work.

12. Goldschmidt, “Realistic Approach Toward a Middle East Free of WMD.”

Lia Swiniarski is a recent graduate of Middlebury College and was a research fellow at the James Martin Center for Nonproliferation Studies on efforts to promote a zone free of weapons of mass destruction in the Middle East.