“It will take all of us working together – government officials, and diplomats, academic experts, and scientists, activists, and organizers – to come up with new and innovative approaches to strengthen transparency and predictability, reduce risk, and forge the next generation of arms control agreements.”
– Wendy Sherman
U.S. Deputy Secretary of State
June 2, 2022
Blown to Hell: America’s Deadly Betrayal of the Marshall Islanders 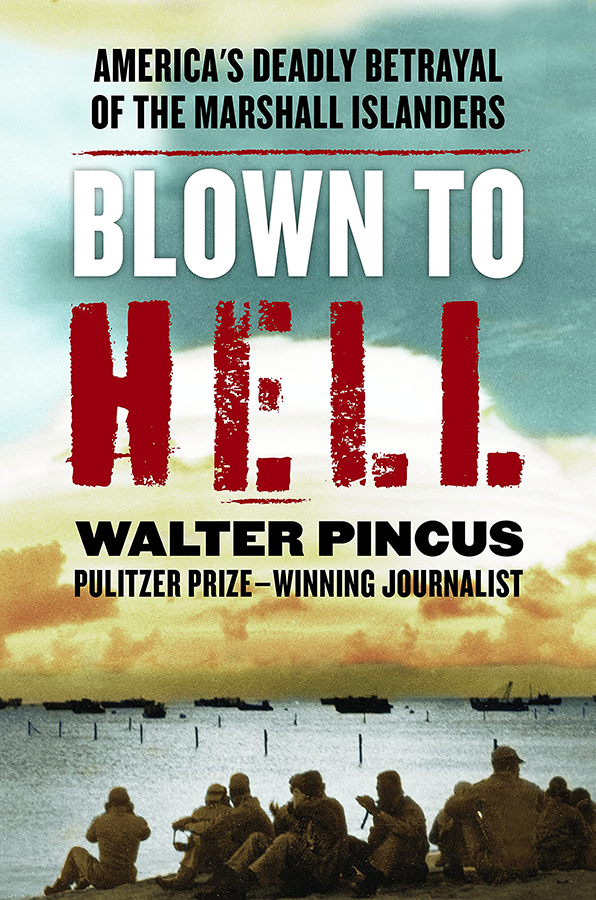 Many researchers have written extensively on the nuclear history of the Marshall Islands, but these publications have not benefited the indigenous Marshallese population justly. Ultimately, it is the Marshallese, not outsiders, who live with the consequences of these circulated narratives, which focus on the environmental and human impact of more than 60 nuclear tests conducted by the United States in their region from 1946 to 1958.1

“The Marshallese people and land [are] often violently exploited by outsiders who use the Marshall Islands to advance their own interests, careers, learning, or power” at the expense of the indigenous community, according to the Marshall Islands National Nuclear Commission. The situation is made worse when such a small community is dependent on an indigenous, extended family network where camaraderie and cooperation is essential to ensuring its overall sustainable development. As the commission has observed, unidimensional depictions of Marshallese people as victims detract from their admirable story of resilience and self-reliance.

Even the title of Walter Pincus’ book, Blown to Hell: America’s Deadly Betrayal of the Marshall Islanders, ironically showcases that this betrayal is not always attributed only to U.S. military operations and U.S. governmental negligence, but also to careless researchers and writers involved in the mass media who are misled into believing that they are conveying moral intelligence. This is because even well-intentioned publications can be invasive and create more hardship for the communities in question where researchers are literally privileged memory-makers, given the power of the written text to inscribe identity and ascribe memories. So one question to ponder is, Did Pincus fall victim to this unfortunate trap?

Implicit Biases Expand Divisions
The author widely references written documents and circulated narratives that drown out indigenous voices in favor of a Western framework bordering on a victimhood mentality. He reveals the atrocities of nuclear weapons by attempting to shine a light from the receiving end, where the common man perspective takes root in the conversation and where indigenous tribal cultural traditions displayed by the Kabua kin, from which Marshall Islands President David Kabua descends, are demonized and individuals are accused of self-interest. Americans have not always been kind to indigenous tribal monarchs as their illegal overthrow of Hawaii’s Queen Lili‘uokalani in 1893 demonstrated, so one should not be surprised that Pincus makes it known how he feels about the Kabua family. He goes so far as to accuse the Marshall Islands’ founding father, Amata Kabua, who spearheaded the nation’s independence, of being a self-interested politician. 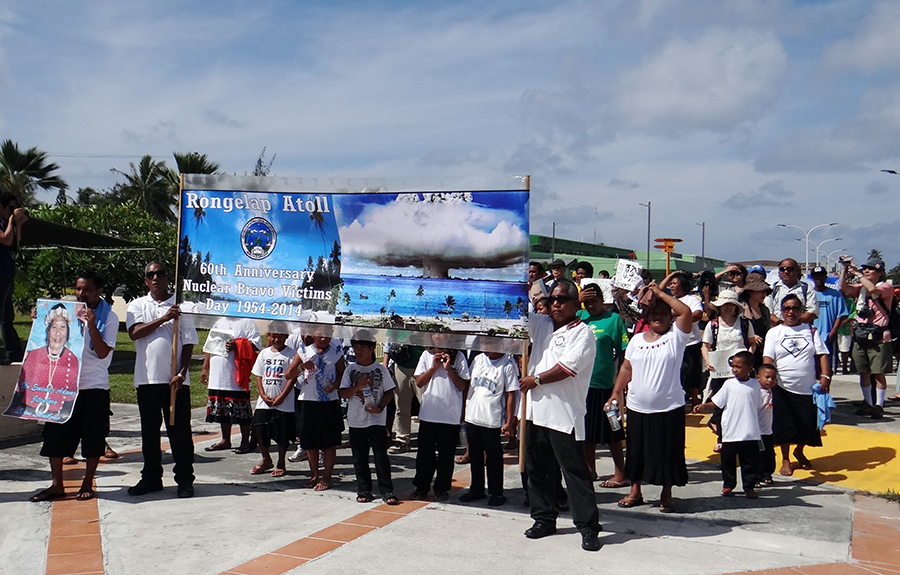 In fact, Amata Kabua was fighting for his people in the same way that Lili‘uokalani did when she was branded a dictator, a defamation that was only corrected when the U.S. Congress passed the “Apology Resolution” in 1993 during the Clinton administration. It is offensive to indigenous Marshallese that outsiders would even think that way without hearing an indigenous perspective, but there is a long history of being ignored. For example, as early as 1953, Amata Kabua’s mother, Dorothy Kabua, known as the queen (Leroij) of Majuro, the capital of the Marshall Islands, saw the danger of nuclear testing and urged the United States to stop. No one listened to her.2

Many negative perspectives advanced by outside researchers and writers have impacted public viewpoints and discourses about the Marshall Islands. This reality was a key point of discontent, for instance, when U.S. Representative Aumua Amata Coleman Radewagen (R-American Samoa) testified last year during a congressional oversight hearing chaired by Representative Katie Porter (D-Calif.) on the U.S. nuclear dump site in the Marshall Islands.3 Radewagen said,

The Marshall Islands are dear to my heart and like a second home to me. Former President Amata Kabua was close to my father and was like an uncle to me and his mother Dorothy named my sister Limanman. So, it’s a personal as well as official concern when U.S. officials insist known legal claims settled in 1986 mean we can wash our hands of the nuclear test legacy. I wish [the] State Department was here today to be reminded of U.S. obligations under the 1986 settlement for cooperation and justice based on human needs
and harm not fully understood back in 1986.4

Even within his narrative, Pincus perpetuates the notion that Judah, the leader of Bikinians and a commoner, was the actual king whereas archived evidence points otherwise, showcasing that Amata Kabua’s grandfather, Jeimata Kabua, was the real indigenous Marshallese king of Bikini Atoll.5

Book Triumphs in Other Ways

Despite the book’s flaws, Pincus succeeds in leaving readers with the impression that an incredible debt is still owed to the people of the Marshall Islands because the United States still has not complied with the financial assistance provision in the Compact of Free Association that it signed with the Marshall Islands and Micronesia. The agreement allows the Marshallese and the Micronesians to live and work in the United States and gives the U.S. military exclusive access to their territories, but the compact is due to end in 2023, leaving Washington little time to fulfill this economic self-sufficiency commitment. Pincus utilizes a narrative framework that has divided and inflamed political tensions in the Marshall Islands in ways similar to 2013, when Julianne Walsh’s Marshallese History textbook, carrying the Marshallese seal, was suspended from being taught in the public school system until factual corrections were made. Nevertheless, Pincus, like Walsh, has expanded access to archived material in a single textbook, a notable and praiseworthy feature of his work.

Another strength of Pincus’ narrative is how he holds the United States accountable to the UN trusteeship agreement of 1947. He writes that the United States was obligated to “protect the health of the inhabitants as well as promote the economic advancement and self-sufficiency of the inhabitants, and to this end…protect the inhabitants against the loss of their lands and resources.” Further, he stressed that, as “the world’s richest nation at the time and the most scientifically advanced, and most powerful democracy,” the United States pledged to care for and educate its inhabitants toward self-government. Despite these obligations, U.S. officials treated the Marshallese as pawns and guinea pigs by “withholding key information about the possible radioactivity threat from their environment, while closely keeping track of any signs that their health was being affected,” Pincus adds.

The author also underscores the grave U.S. failure to acknowledge the “changed circumstances petition”6 in light of the pressures of climate change on these nuclear communities, specifically the people of Bikini Atoll. This topic receives considerable attention toward the end of the book, particularly the last two chapters and epilogue, where Pincus updates readers on the current situation of the Bikini people and the Rongelap people. He asserts that they continue to be victims of failed leadership from their local governments and from the U.S. government, particularly the Trump administration, which relaxed funding oversight of Bikini’s trust fund.

President Kabua announced in March on Nuclear Victims Remembrance Day in the Marshall Islands that he will not sign or renew the Compact of Free Association, known as Compact III, if the nuclear justice issue is not settled once and for all. That would include the United States changed circumstances petition submitted to Congress in 2000, which showcases greater nuclear testing-related damage to the Marshall Islands than was previously understood or acknowledged. The petition requests additional compensation for personal injuries and property damages and restoration costs, medical care programs, health services infrastructure and training, and radiological monitoring. After a long hiatus of no substantive engagement on Compact negotiations since the end of the Trump administration in January 2021, President Joe Biden, seeking to counter Chinese influence in the Pacific, finally chose Joseph Yun as his special envoy to lead the negotiations, but it is uncertain whether the nuclear justice issue will be put on the table. The concept of nuclear justice asserts that the United States should acknowledge the full scope of the damages from its nuclear testing in the Pacific by enacting the changed circumstances petition along with financial assistance to cover intergenerational and incidental damages. This compensation should include the safe resettlement of displaced human populations and the restoration of economic productivity of affected areas given Marshall Islands unique indigenous land economy and its associated blue economy.7

As with the 2004 Compact of Free Association, when the Bush administration rejected the changed circumstances petition, the future remains uncertain as to whether the long-term health and environmental damages of U.S. nuclear testing, predicted by the first Marshallese president on May 1, 1979,8 and recapitulated by Pincus in his epilogue, will finally be resolved. On a positive note, in marking Nuclear Victims Day of Bravo, a congressional resolution was introduced in March 2021 that would apologize to the Marshallese people for the effects of the U.S. nuclear testing program. Sponsored by Senators Mazie Hirono (D-Hawaii) and Ed Markey (D-Mass.) and Representative Porter, and co-sponsored by Representative Radewagen, the resolution calls attention to what transpired in the Marshall Islands during the nuclear testing period and raises awareness on the need to undo existing and expected long-term harm.9

Equally worth noting is that the Treaty on the Prohibition of Nuclear Weapons (TPNW) entered into force on January 22, 2021, and is the first treaty of its kind drawing serious attention to the humanitarian horrors of these weapons. The Marshall Islands has not ratified the treaty because of concerns that the “provisions on responsibility for addressing nuclear testing impacts have an ineffective and inappropriate shift of the primary burden from the states which have undertaken such testing, to the host nation where such testing occurred.” The Marshallese support the treaty’s moral call and believe it has placed a well-deserved focus on the suffering of victims.10 Nevertheless, the government remains unconvinced of the TPNW’s ultimate value given how the UN system has failed the nation before, specifically in the 1950s when the Marshallese petitioned to end the nuclear testing program.11 That story is missing from Pincus’ narrative, and its inclusion would have been the simplest way to turn the book into a clear winner. Stories of Marshallese resilience remain underappreciated and rarely mentioned in the book where “epistemological silencing”12 is evident.

Given the years of insufficient visibility on the nuclear legacy, Pincus is worth applauding for using his platform as a Pulitzer Prize-winning reporter to highlight a neglected part of U.S. history that was largely driven by nuclear colonialism and environmental racism.13 As he notes, “In telling of these people, I hoped to show how much is owed to Marshall Islanders.” His book is a well-intentioned effort to educate the American public on its moral responsibility to the Marshallese people, a promise yet to be fulfilled.

Still, it is crucial that white male authors with positions of privilege not remove “indigenous agency,” and thereby inadvertently promote “institutional racism” and “pedagogical silencing” under the classic “white savior syndrome” that “encourages individual dependency rather than long-term community building or long-term community self-sufficiency.”14 That is where the author should have dedicated his efforts. By reframing the Marshallese story as one of survivors15 rather than victims, Pincus would have granted the indigenous population a greater voice and would have granted his book more authenticity.

14. Colleen Murphy, “What Is White Savior Complex, and Why Is It Harmful? Here’s What Experts Say,” Health.com, September 20, 2021, https://www.health.com/mind-body/health-diversity-inclusion/white-savior-complex.

Desmond Narain Doulatram is a social science instructor at the College of the Marshall Islands Liberal Arts Department, a member of the National Board of Education of the Marshall Islands, and a co-founder of two nongovernmental organizations, one dealing with environmental issues, JO-JiKuM, and the other, nuclear issues, REACH-MI.