States met for the first time to review implementation of a treaty that aims to prevent the malicious use of nuclear materials by setting security and physical protection requirements for peaceful nuclear programs. 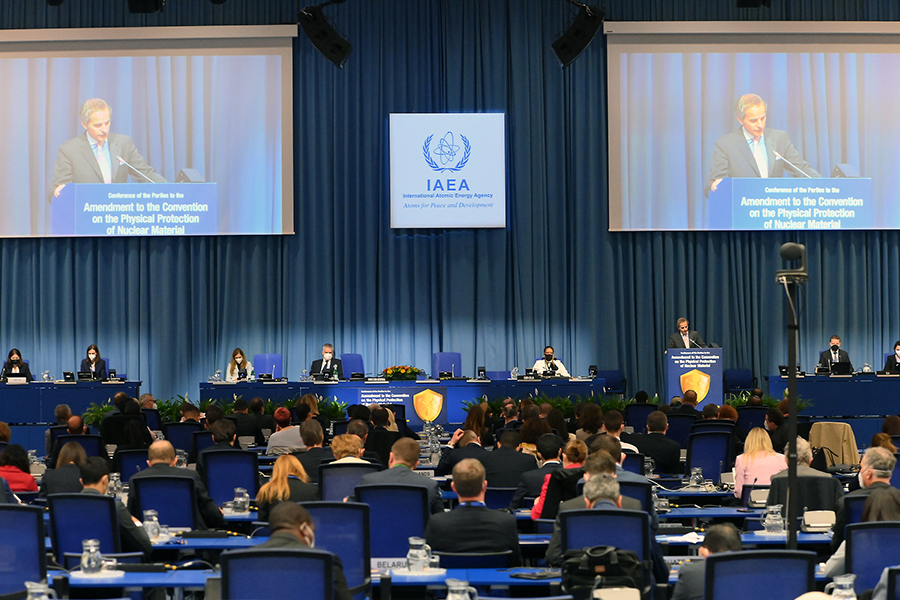 The Convention on the Physical Protection of Nuclear Material (CPPNM) entered into force in 1987, but its requirements were limited to securing peaceful nuclear materials during international transit. A 2005 amendment to the treaty expanded the legally binding physical protection measures to cover nuclear materials during domestic use, storage, and transit. The amended treaty requires state-parties to meet five years after its entry into force, which occurred in 2016, to assess the adequacy of the treaty.

Representatives from 106 of the 129 states that are party to the amended convention participated in the March 28–April 1 conference at the International Atomic Energy Agency (IAEA) in Vienna.

In opening remarks, IAEA Director-General Rafael Mariano Grossi described the review meeting as a “significant milestone in international nuclear security.” He called for universalization of the amended treaty, noting that as the use of nuclear technology expands, “the atlas of opportunity and threat is being regrown in unpredictable ways and at unprecedented speed.”

In their concluding document, the states assessed that the amended treaty is adequate to meet current needs, but noted that the risk environment is changing due to the expansion of peaceful uses of nuclear materials, advanced reactors, and new technologies. States requested that the IAEA convene a second review conference at a later date to assess the treaty’s adequacy again. The amended CPPNM does not require regular reviews after the first conference, but subsequent conferences can be held after five or more years if a majority of states-parties request it.

The United States noted its strong support for a subsequent review conference in its national statement. The statement, delivered by Bonnie Jenkins, U.S. undersecretary of state for arms control and international security, said it was “essential” to continually review the global nuclear security regime and that “all states benefit from strong global nuclear security, because an act of nuclear terrorism anywhere will have grave consequences.”

The conference also served as an opportunity for states to share best practices and announce new nuclear security commitments. Several countries, including the United States, highlighted actions taken to address the risk posed by cyberattacks. Jenkins said the United States completed inspections at all U.S. nuclear power plants to ensure compliance with cybersecurity requirements and that it is committed to conducting inspections every two years.

Jenkins also announced that the United States is continuing to work with the IAEA to verify the disposition of 40 metric tons of excess plutonium and is requesting that the agency conduct an International Physical Protection Advisory Service mission. The statement said such missions are “important tools for ensuring the adequacy of national nuclear security regimes.”

The conference document encouraged all states to make use of such missions and to share good practices identified in the process.