Sanctions targeting Iran’s Islamic Revolutionary Guard Corps (IRGC) remain the primary obstacle to reaching a deal to return the United States and Iran to compliance with the 2015 nuclear agreement. 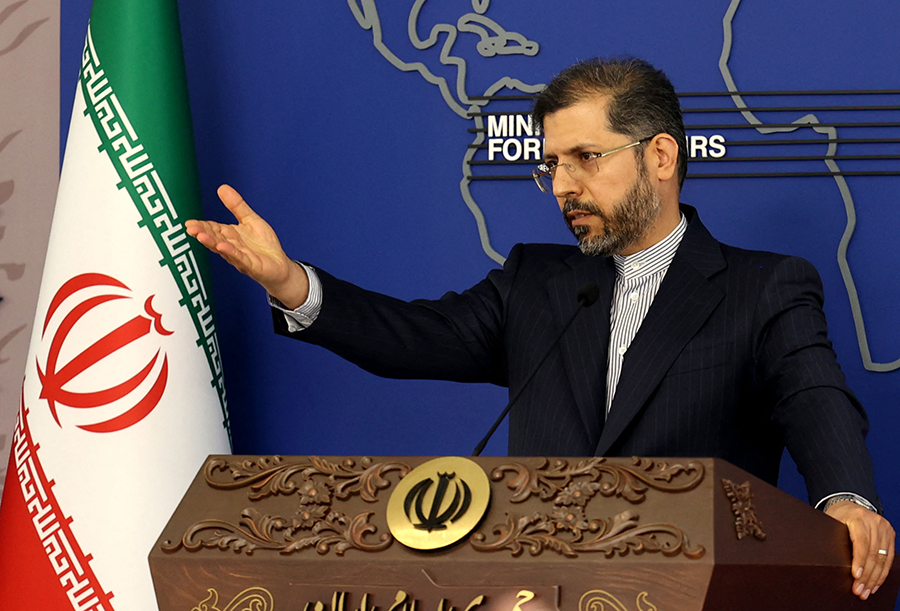 Saeed Khatibzadeh, spokesperson for the Iranian Foreign Ministry, said in an April 11 press briefing that Iran has finalized the necessary details to return its nuclear program to compliance with the deal, known as the Joint Comprehensive Plan of Action (JCPOA), but is waiting for the United States to “show the will to return to its own obligations” and respond to the latest Iranian proposal on lifting certain IRGC sanctions.

Tehran is demanding the removal of Washington’s designation of the IRGC as a foreign terrorist organization as part of the agreement to restore compliance with the accord. The IRGC was not designated as a foreign terrorist organization until April 2019, so it is not included in sanctions that the United States would be required to remove to return to JCPOA compliance. But the Biden administration has said that, as part of an agreement to return to compliance alongside Iran, it would lift additional sanctions imposed by President Donald Trump that are inconsistent with the nuclear deal.

The U.S. negotiating team reportedly offered to remove the designation on the IRGC if Tehran provided assurances that it would deescalate tensions in the Middle East and not retaliate further for the U.S. killing of Qassem Soleimani, the general who headed the IRGC Quds Force, in 2020.

Iran rejected that proposal and offered its own, on which Enrique Mora, EU coordinator of the group of countries that are currently party to the deal (China, France, Germany, Russia, and the United Kingdom), briefed the Biden administration in March. The United States has yet to respond.

When asked if the Biden administration is behind the holdup, State Department spokesperson Ned Price said in an April 18 press briefing that if Iran wants to “negotiate issues that fall outside the purview of the JCPOA, then we’ll do that, but they will need to negotiate those issues in good faith with reciprocity.”

Earlier that day, Khatibzadeh suggested that the killing of Soleimani “will not go unpunished” even if the United States removes the IRGC from the list of foreign terrorist organizations. Avenging his death is a “fundamental principle” of Iran’s foreign policy, he said.

Even if the IRGC is removed from the U.S. list of foreign terrorist organizations, it will still be subject to other sanctions that would not be lifted if Washington returns to the nuclear deal. This includes recent sanctions imposed by the Biden administration on the IRGC for ballistic missile-related activities. Although removing the foreign terrorist organization designation would have little practical impact, it would be politically challenging for President Joe Biden as members of his own party are split on the issue.

Sen. Chris Murphy (D-Conn.) told NBC on April 16 that it would be “political malpractice” for the IRGC designation to be a “sticking point” that prevents a return to compliance with the nuclear deal, but other Democrats have raised concerns about lifting the foreign terrorist organization label. Sen. Ben Cardin (D-Md.) said on March 22 that the designation “should remain” because the IRGC is a terrorist organization.

Recent comments by U.S. officials suggest that the Biden administration might be hesitant to remove the designation because it shares the view that the Quds Force, a branch of the IRGC, is a terrorist group.

Gen. Mark Milley, chairman of the Joint Chiefs of Staff, told the Senate Armed Services Committee on April 7 that he did not support removing the Quds Force from the foreign terrorist organization list. The next day, Jalina Porter, State Department deputy spokesperson, said that “the president shares the chairman’s view that IRGC Quds Forces are terrorists.”

The delays caused by the dispute over the IRGC sanctions is creating space for opponents of restoring the JCPOA to build pressure against a deal in Washington and Tehran.

Conservative lawmakers in the Iranian Parliament have stated that the draft text of the deal violates Iran’s redlines because it does not provide the guarantees Iran is looking for on sanctions relief. In an April 10 letter to Iranian President Ebrahim Raisi, 250 members of Parliament said that a return to the JCPOA requires legal guarantees that the United States will not violate the deal in the future.

But parliamentary opposition will not pose a serious obstacle to a return to the JCPOA if Iranian Supreme Leader Ali Khamenei approves the agreement. Khamenei said on April 12 that the Iranian negotiating team “resisted” the “excessive demands” of the United States and its JCPOA negotiating partners and talks are “going ahead properly.”

The Biden administration is also facing domestic opposition. Members of Congress will likely have a 30-day window to vote to approve or disapprove any agreement reached to restore U.S. and Iranian compliance with the JCPOA under the 2015 Iranian Nuclear Agreement Review Act. A vote of disapproval from the House and Senate would prevent Biden from lifting sanctions.

Biden is likely to retain enough support for restoring the JCPOA to stave off a vote of disapproval by both houses of Congress, but a close vote will likely undermine confidence in a restored nuclear deal.

The stalemate over the IRGC designation also risks the possibility of Iran’s nuclear program advancing past the point where the Biden administration assesses the JCPOA can be restored. U.S. Secretary of State Antony Blinken again warned that “time is getting extremely short” to restore the JCPOA. Speaking to NBC on April 6, Blinken also said that he is “not overly optimistic” about reaching a deal but it would be in the best interest of the United States to do so.

Iran’s growing stockpile of highly enriched uranium remains one of the key factors driving the short time frame for negotiations. Iran is enriching some of its uranium to 20 percent and some to 60 percent uranium-235, each of which is below the 90 percent U-235 enrichment level commonly used in nuclear weapons but significantly above the 3.67 percent threshold set by the JCPOA. These stockpiles of uranium enriched to higher levels significantly decrease Iran’s breakout window, which is the amount of time it would take for Iran to produce enough weapons-grade material for a bomb. That time frame is now down to about two to three weeks.

Iran did announce in March that it would begin converting some of its stockpile of 60 percent-enriched uranium into a form not suitable for further enrichment, but such a move will not buy much time.

If a deal is reached, it is likely that Iran will ship much of its stockpile of enriched uranium to Russia, similar to the steps it took in 2015 to come into compliance with the stockpile limit set by the JCPOA. The head of the Atomic Energy Organization of Iran, Mohammad Eslami, said on April 6 that Iran was in talks with Russia about sending out the materials in the event of an agreement. He said Tehran and Moscow are discussing the amount of material to be transferred, how to ship it, and what Iran would receive in return.

Eslami also confirmed that the United States has provided assurances that its sanctions targeting Russia will not interfere with nuclear cooperation between Moscow and Tehran.