Spurred by the use of landmines and cluster munitions in the Russian war on Ukraine, Democratic members of the U.S. Congress have called for changes in U.S. policy on such weapons. 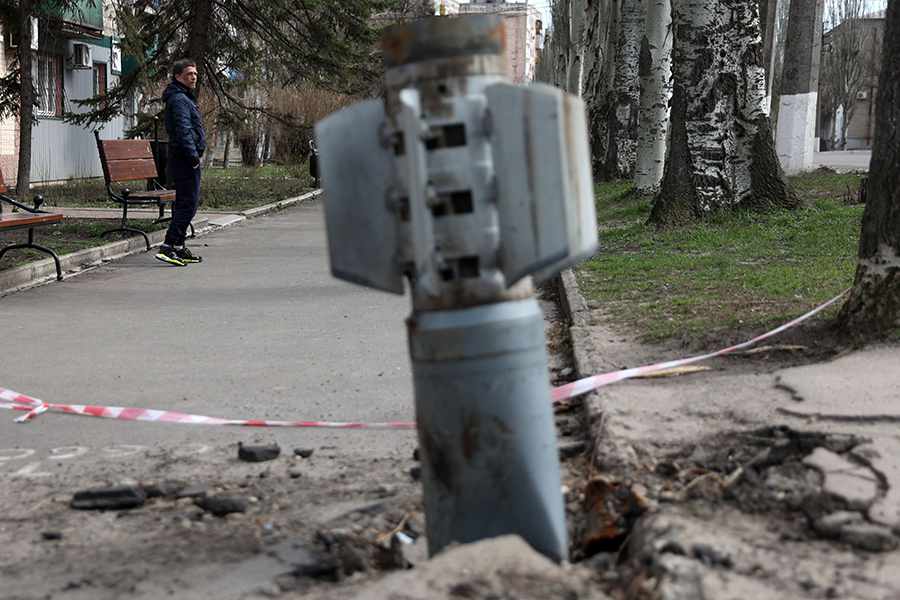 The group, led by Reps. Bill Keating (Mass.), Jim McGovern (Mass.), and Sara Jacobs (Calif.), argued that past justifications for current U.S. policy, which allows for use of landmines and cluster munitions, “are no longer relevant.”

They pointed to U.S. military efforts to mitigate civilian deaths in war through guided munitions as part of their appeal to President Joe Biden “to take all the necessary steps” to join the Convention on Cluster Munitions (CCM).

The United States, Russia, and Ukraine are not among the 110 states-parties to the CCM. That treaty bans the use of the weapons, which deliver smaller submunitions that often fail to explode as intended and historically have harmed many more civilians than soldiers.

Almost from the start of the Russian invasion of Ukraine on Feb. 24, global concerns were raised about Russian targeting of civilian areas and use of controversial weapons, such as cluster munitions and landmines. In late March, Human Rights Watch reported on Russian use of a recently developed landmine equipped with a sensor to detect approaching persons. It ejects an explosive charge into the air that can kill and maim individuals up to 50 feet away, making it more harmful with its initial blast and more difficult to demine than many other anti-personnel mines. (See ACT, April 2022.)

The president of the Mine Ban Treaty, Alicia Arango Olmos, who is also the Colombian ambassador to the United Nations in Geneva, condemned landmine usage in Ukraine, saying on April 5 that it “violates key principles of international humanitarian law and further exacerbates the heavy toll being brought upon the civilian population of Ukraine.”

Meanwhile, The New York Times reported on April 18 that Ukrainian forces had used cluster munitions in Husarivka in eastern Ukraine, the first such reported use by Ukrainian forces since 2015. When asked about Ukraine’s use, U.S. State Department spokesperson Ned Price said on April 18 that he was not in a position to comment and reiterated U.S. support for Ukraine. Pentagon spokesperson John Kirby said the United States could not independently confirm the usage.

As U.S. policymakers argued that condemnations of Moscow would be stronger if Washington would join the treaty banning cluster munitions, similar assertions were made about landmine policy. There have been no commitments by Biden to change cluster munition policy, but his administration’s responses to queries about landmines may indicate a weakening of promises to restrict their use.

A long-time champion of the Mine Ban Treaty, Leahy said in a speech on April 7 that a decision by the United States to join the treaty “would not guarantee that Russia would, but it would greatly enhance our credibility to call out their use of mines.” In June 2021, a bicameral, bipartisan group of 21 members of Congress called on the president to put the United States on the path to joining the treaty, saying it “will enhance our credibility in seeking to stigmatize the use of anti-personnel mines.”

When asked about the utility of mines during a U.S. Senate Armed Services Committee hearing on April 7, Gen. Mark Milley, chairman of the Joint Chiefs of Staff, pointed to their use in Ukraine, saying that “anti-tank or anti-personnel landmines are very effective.”

That statement appears to run counter to ones made in 2021 by Linda Thomas-Greenfield, U.S. ambassador to the UN, indicating that the Biden administration intended to roll back a Trump-era policy that allowed for the potential use of landmines by U.S. troops anywhere, instead of just on the Korean peninsula, as specified under Obama administration policy. (See ACT, December 2021.) A senior Pentagon official said on April 8 that a review of U.S. landmine policy is still underway and “could be informed by this conflict.”

Although the United States and Russia are not among the 164 states-parties to the Mine Ban Treaty, Ukraine is. There is no evidence that Ukrainian forces are using anti-personnel landmines banned by the treaty.

In announcing $800 million in additional aid to Ukraine on April 13, the Biden administration listed among the transfers “M18A1 Claymore anti-personnel munitions configured to be consistent with the Ottawa Convention,” meaning in a command-detonated mode.

The Mine Ban Treaty, also known as the Ottawa Convention, prohibits the use of “victim-activated” anti-personnel mines, which are exploded by the presence, proximity, or contact of a person. Command-detonated landmines, those for which a human decides to explode the weapon, are not explicitly banned by the treaty. These include Claymore mines in a command-detonated configuration. The treaty also does not explicitly ban anti-vehicle or anti-tank mines, which typically require heavier than human loads to detonate.

In 2020 the U.S. Defense Department argued that the United States needed to retain the use of mixed mine systems, such as those deployed via Volcano dispensers, that combine anti-personnel and anti-tank weapons in order to “discourage and delay adversaries from hand clearing of minefields intended to block, fix, or channel enemy tanks and vehicles.”