Australia, the United Kingdom, and the United States have agreed to collaborate on accelerating the development of advanced hypersonic and counter-hypersonic capabilities in an expansion of the initial scope of their trilateral security partnership. 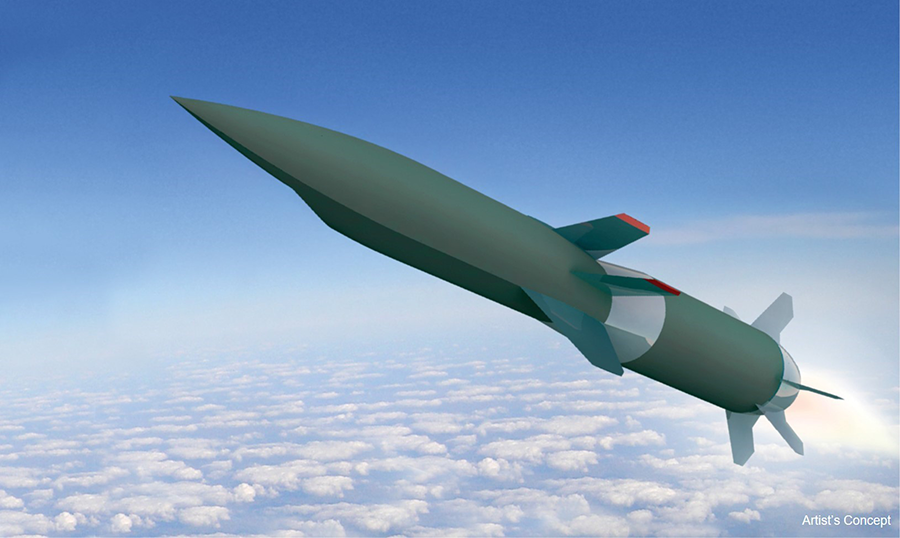 This partnership, known as AUKUS, “committed today to commence new trilateral cooperation on hypersonics and counter-hypersonics, and electronic warfare capabilities, as well as to expand information sharing and to deepen cooperation on defense innovation,” according to a joint statement by U.S. President Joe Biden, UK Prime Minister Boris Johnson, and Australian Prime Minister Scott Johnson on April 5.

AUKUS was launched in September 2021 with a pledge by Washington and London to equip Canberra with conventionally armed, nuclear-powered submarines. (See ACT, November and October 2021.) The three countries also agreed to work together in four areas of advanced capabilities—cyber capabilities, artificial intelligence, quantum technologies, and undersea capabilities—in recognition of their “deep defense ties,” according to the joint statement first announcing the AUKUS partnership last year.

The inaugural meetings of the two trilateral joint steering groups were held in December 2021, during which the group on advanced capabilities “discussed other additional capabilities and agreed to identify potential opportunities for collaboration” in addition to the four existing areas. The April announcement marked the first disclosure of how the three countries plan to expand their partnership on new, emerging, and advanced capabilities and technologies.

The partnership emerged with a stated objective to “ensure peace and stability in the Indo-Pacific,” Biden said in September. Thus far, the three members have been careful in not directly attributing the new partnership to shared concerns regarding China, but the connection is widely accepted. Beijing has sharply criticized the initiative from the outset and repeated its criticisms following the April announcement.

The AUKUS partnership “not only increases nuclear proliferation risks and brings shocks to the international nonproliferation system, but also intensifies the arms race and undermines peace and stability in the Asia-Pacific,” Chinese Foreign Ministry spokesperson Zhao Lijian said on April 6. “Countries in the region should be on a higher alert.”

The AUKUS pledge to collaborate on hypersonic technology came on the same day as the revelation by the U.S. Defense Advanced Research Projects Agency (DARPA) of a second successful test of the Hypersonic Air-Breathing Weapon Concept (HAWC) in mid-March. The agency kept news of the test quiet for about two weeks in order to avoid escalating tensions as Biden traveled to Europe for meetings with NATO, the European Union, and the Group of Seven concerning Russia’s war in Ukraine, a U.S. defense official told CNN.

During the March test, the HAWC vehicle was released from a B-52 bomber off the West Coast and was accelerated by a booster engine before the air-breathing scramjet ignited and allowed the vehicle to cruise at speeds higher than Mach 5 for an extended period of time.

This test “successfully demonstrated a second design that will allow our war-fighters to competitively select the right capabilities to dominate the battlefield,” said Andrew Knoedler, HAWC program manager for DARPA.

The forward momentum with the HAWC hypersonic program was contrasted with a major delay in the schedule for the Air Force’s Air-Launched Rapid Response Weapon (ARRW) system, which was slated to be the first deployed U.S. hypersonic weapon, with an initial operational date of fiscal year 2022.

An Air Force statement provided to Bloomberg News on April 6 stated that the new operational date has been moved to sometime in the next fiscal year.

The ARRW system failed three flight booster tests, in April, July, and December 2021. The system must successfully complete booster and all-up-round test flights before a contract is awarded to Lockheed Martin to kick-start production.

The Air Force statement noted that, “due to recent flight test anomalies,” the first all-up-round test has been rescheduled to take place between October 1 and December 30 with additional tests later in fiscal year 2023. A January report by the Pentagon’s testing and evaluation office also found that the schedule for the ARRW system “could be delayed due to the limited number and availability of hypersonic flight corridors, target areas, and test support assets.” (See ACT, March 2022.)

“I think it was to demonstrate the capability and attempt to put fear in the hearts of the enemy,” said Wolters. “I don’t think they were successful.”

Rep. Mike Turner (R-Ohio), at a House Armed Services Committee hearing on April 5 featuring Defense Secretary Lloyd Austin, asserted that the United States “is behind our adversaries” with regard to hypersonic weapons, referring to Russia and China.

But Austin cautioned that “we have to be careful” when it comes to claims that the Pentagon is falling behind in developing and deploying these capabilities. “Hypersonics is a capability, but it’s not the only capability,” he responded.

After Rep. Matt Gaetz (R-Fla.) also claimed that Washington is falling behind in the hypersonic race, Austin questioned the basis for the assertion, asking, “What do you mean we are behind in hypersonics?”

The defense secretary and other Pentagon officials such as Heidi Shyu, the undersecretary of defense for research and engineering, have met with hypersonics industry executives at least twice this year in order to quicken the pace of hypersonic weapons systems development, which the department has prioritized as a critical technology.