“What's really strikes me about ACA is the potential to shape the next generation of leaders on arms control and nuclear policy. This is something I witnessed firsthand as someone who was introduced to the field through ACA.”
– Alicia Sanders-Zakre
ICAN
June 2, 2022
Syrian Chemicals Stockpile Declaration Still Incomplete

Seven years after Syria acceded, under international pressure, to join the Chemical Weapons Convention (CWC) and allow for the removal of its large chemicals weapons stockpile in the midst of a civil war, top international officials continue to warn that Syria’s declaration is incomplete, suggesting that the regime of Bashar al-Assad has withheld some prohibited items. 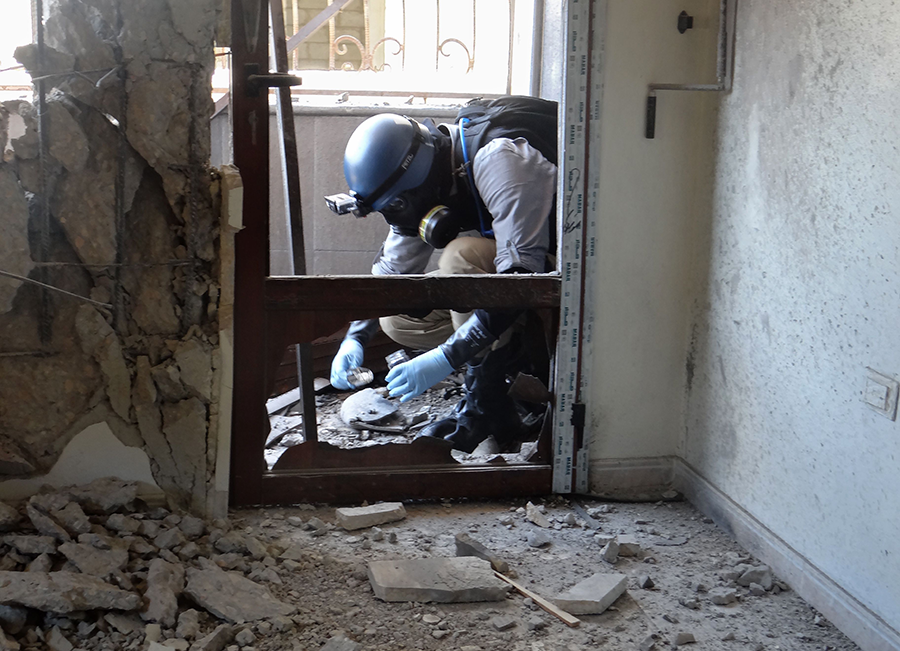 During a March 4 briefing of the UN Security Council, Izumi Nakamitsu, the high representative for disarmament affairs, told the council that only limited progress has been made toward resolving an extensive list of outstanding questions regarding Syria’s chemical weapons dossier.

Nakamitsu’s briefing bore a similar tone to that of Fernando Arias, who heads the Organisation for the Prohibition of Chemical Weapons (OPCW). “At this stage, considering the issues that remain unresolved, the Secretariat assesses that the declaration submitted by the Syrian Arab Republic cannot be considered accurate and complete,” the chemical weapons watchdog chief relayed to a March 9–12 meeting of the OPCW Executive Council.

In the years since the UN-OPCW operation in 2013–2016 to remove and destroy the bulk of Syria’s chemical weapons arsenal, reports of ongoing chemical weapons attacks attributed to the Syrian government against rebel forces and civilians have raised serious questions about the validity of the initial declaration. The OPCW Declaration and Assessment Team (DAT) was established in 2014 to resolve outstanding issues and verify the completeness and accuracy of Syria’s stockpile declaration.

The DAT has conducted 24 rounds of consultations with Syria in an effort to clarify inconsistencies with its declaration. In a statement on the Syria dossier, Arias told the Executive Council that, as of March 2021, 19 issues with Syria’s declaration remain outstanding, including the “unknown, potentially significant, quantities of chemical warfare agents” that have yet to be declared, as well as “indicators of three undeclared chemical warfare agents found in the samples collected by the DAT.”

One of those outstanding issues pertains specifically to the OPCW’s request that Syria declare its production or weaponization of a nerve agent at a certain chemical weapons production facility omitted from its initial declaration. The production, stockpile, storage, and use of nerve agent is explicitly prohibited by the CWC; although Syria was obligated to declare any such activities to the OPCW in 2013, it did not.

Arias shared that Syria sent a note verbale to the OPCW on March 9 suggesting that discussions were ongoing on that matter and whether chemical weapons were produced or weaponized at the facility in question. But, he said, “the Secretariat has assessed all available information, including explanations provided by the Syrian Arab Republic, to justify the presence of chemical nerve agents at this site.”

In his introductory statement to the council that day, Arias affirmed that “a review of all the information and other materials gathered by the DAT since 2014, including samples, indicates that production or weaponisation of chemical warfare nerve agents took place at this facility.”

Apart from the matter of Syria’s incomplete stockpile declaration, Arias also informed the council that the OPCW’s mandate for certain monitoring activities in Syria expired in 2020. A July 2014 council decision mandated that the chemical weapons watchdog install remote monitoring systems at several former chemical weapons production facilities in Syria. After inspectors made their final visit to those locations in November 2020, the OPCW advised Syria that those facilities should remain sealed pursuant to Syria’s chemical weapons destruction plan and the spirit of the CWC.

Syria’s noncompliance with the CWC and its failure to cooperate with ongoing OPCW investigations threaten to further weaken the global norm against chemical weapons use, but new efforts are underway to hold Syria to account.

The OPCW Investigation and Identification Team (IIT), which was established in 2019 to attribute instances of chemical weapons use in Syria, will issue its second report before this summer, Arias informed the council. Furthermore, in October and November 2020, the OPCW shared material for the first time with the International, Impartial, and Independent Mechanism (IIIM), which is a UN subsidiary mandated “to assist in the investigation and prosecution of persons responsible for the most serious crimes under international law committed in the Syrian Arab Republic since March 2011.”

The partnership between the IIT and the IIIM was established in July 2020, when the Executive Council welcomed a memorandum of understanding between the OPCW and the UN body, which is responsible for collecting and conveying information that may be relevant for national or international courts and tribunals. (See ACT, September 2020.)

In February, a German court sentenced two former Syrian military officials responsible for committing crimes against humanity during the Syrian civil war. The landmark conviction could set a precedent for prosecuting Syrian government officials for the ongoing, illegal use of chemical weapons. Continued coordination between the OPCW and the IIIM could help to support those efforts.

Also, CWC states-parties may vote to take a number of steps to hold Syria accountable for the use of chemical weapons in violation of the treaty, to which it acceded in 2013. Citing Damascus’ failure to come clean on its stockpile declaration, most recently after being called to do so no later than October 2020, Arias told the council that, “on the basis of the information provided, it is up to you, states-parties, to decide how you wish to proceed.”

States convened Nov. 30–Dec. 1, 2020, at The Hague for the first session of the 25th conference of CWC states-parties. (See ACT, January/February 2021.) They will meet again April 20–22, where the Syria dossier is expected to feature in the discussions.