“[My time at ACA] prepared me very well for the position that I took following that with the State Department, where I then implemented and helped to implement many of the policies that we tried to promote.”
– Peter Crail
Business Executive for National Security
June 2, 2022
IAEA Backs Off Iran Resolution

In early March and just days after the International Atomic Energy Agency (IAEA) director-general reached a temporary agreement with Iran to help the agency maintain essential oversight of Iran’s nuclear program, three key European powers advanced a resolution to the IAEA Board of Governors that would have censured Iran on the safeguards issue. The states were later persuaded to withdraw the proposal out of concern it would undermine prospects for restoring compliance with the 2015 Iran nuclear deal. 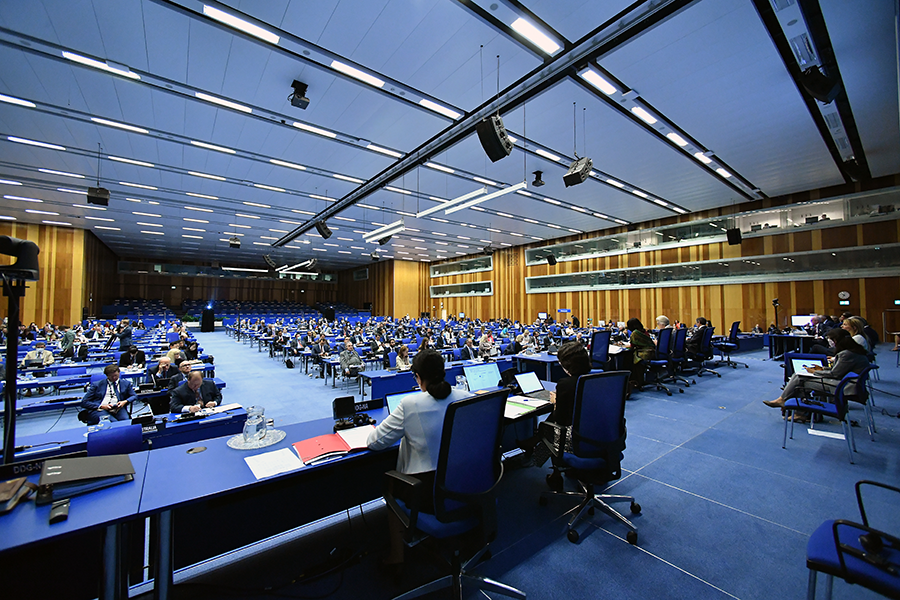 The three European members of the deal, known as the Joint Comprehensive Plan of Action (JCPOA), circulated the draft resolution censuring Iran ahead of the quarterly Board of Governors meeting, which was held March 1–5 in Vienna. Their resolution expressed deep concern with Tehran’s recent steps to limit its safeguards arrangements with the agency that are mandated by the nuclear deal.

On Feb. 23, Iran announced that it would suspend implementation of the additional protocol to its comprehensive safeguards agreement and would reduce compliance with certain other monitoring mechanisms required by the accord. Tehran did so in accordance with a December 2020 law that obligates the Atomic Energy Organization of Iran (AEOI) to rachet up nuclear activities in violation of the JCPOA until Iran’s demands for U.S. compliance with the JCPOA, including sanctions relief, are met. (See ACT, January/February 2021.)

The additional protocol provides the IAEA with information and an expanded set of tools to verify the exclusively peaceful nature of Iran’s nuclear program. It grants the agency further insight into all elements of Iran’s nuclear fuel cycle, permits inspectors to collect environmental samples from declared and undeclared sites, and allows the IAEA to conduct complementary access visits on short notice to investigate any instances of suspicious activity.

To prevent the planned suspension from becoming a full-blown safeguards crisis, IAEA Director-General Rafael Grossi traveled to Tehran on Feb. 21, ahead of Iran’s announcement. With Iranian Vice President Eshaq Jahangiri and Ali Akbar Salehi, head of the AEOI, the three reached a temporary bilateral arrangement whereby the agency can continue certain additional verification activities in Iran for three months. Iran will gather and store certain information during that time and provide it to the agency if sanctions relief is granted.

Iran’s decision to reduce monitoring marked its most recent step and one of the most significant steps taken to limit compliance with the JCPOA since the United States withdrew from the deal in 2018 and reimposed stringent economic sanctions on Iran. Tehran began violating the deal one year later, in 2019, but maintains that all breaches of the accord, including its reduction in monitoring, will be reversed if JCPOA sanctions are lifted.

The European draft resolution condemned Iran for suspending the additional protocol and further called on Iran to cooperate fully with the IAEA investigation into certain outstanding issues related to Iran’s comprehensive safeguards agreement. Those outstanding issues were detailed in a Feb. 23 IAEA report stemming from an ongoing, multiyear agency investigation into Iran’s pre-2003 nuclear activities and are separate from the nuclear deal.

Several states, including members of the European Union, opposed the European draft resolution because it married Iran’s legal obligation to comply with IAEA investigations into its past nuclear activities with its steps taken under the 2015 nuclear agreement.

Tehran vehemently opposed the draft resolution and, in a paper submitted to the IAEA Board of Governors, warned that adoption of the resolution would signal an end to the temporary monitoring arrangement between Iran and the IAEA. After the Europeans scrapped the resolution, an Iranian Foreign Ministry spokesman remarked March 4 that “today’s development can maintain the path of diplomacy opened by Iran and the IAEA and pave the way for full implementation by all parties” to the JCPOA.

The outcome keeps open the door for Iran, the United Kingdom, France, Germany, China, Russia, and the United States to continue to try to reach agreement on a pathway to restore U.S. and Iranian compliance with the JCPOA.

Iranian Foreign Minister Javad Zarif gave an interview Feb. 21 during which he affirmed that Iran remains interested in restoring the JCPOA, despite Iran’s planned reduction in monitoring.

“There is a path forward, with a logical sequence,” he wrote in a Twitter post that day, referring to Iran’s belief that the United States should commit to the JCPOA and fulfill its obligations under the deal, including by lifting sanctions. “Iran will reciprocate immediately by reversing its remedial measures,” he added.

According to diplomatic sources in Vienna, the United States played a role in convincing the Europeans to withdraw their proposed resolution, in part because the Biden administration signaled support for distinguishing between the IAEA safeguards investigation and Iran’s decision to suspend the JCPOA monitoring provisions.

Louis L. Bono, the U.S. representative to the IAEA, remarked in his March 4 statement before the Board of Governors that “while these safeguards issues are a separate topic [from the JCPOA], resolving them will also be essential for establishing confidence in Iran’s nuclear related assurances.” He said the administration “remain[s] ready to reengage in meaningful diplomacy to achieve a mutual return to compliance with the JCPOA.”