A new U.S. Defense Department assessment of China’s military power found that China continues to expand its nuclear capabilities, but the report seems to provide a less alarmist view of Beijing’s nuclear weapons policy and plans than some Trump administration officials have suggested. 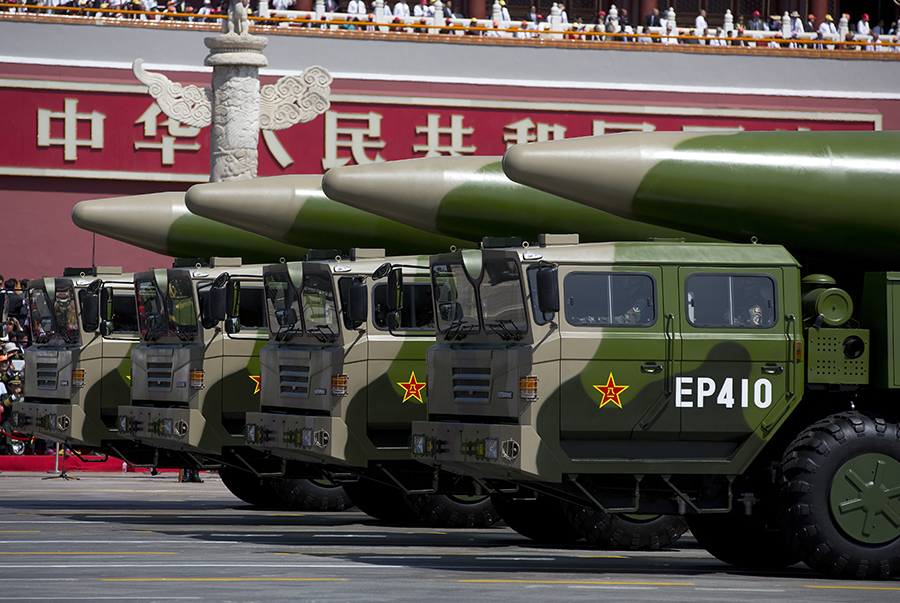 According to the Pentagon’s 2020 report to Congress assessing China’s military capabilities, Beijing is estimated to possess a total nuclear warhead stockpile “in the low 200s.” The September report says that Beijing will likely “at least double its warhead stockpile,” which affirms an earlier department estimate, and that it will do so without new fissile material production.

The report, which covers Chinese security and military developments through 2019, marks the first time the U.S. government has provided a public estimate of China’s nuclear arsenal. U.S. Defense Intelligence Agency Director Robert Ashley assessed in May 2019 that China had an arsenal of warheads in the “low couple of hundreds,” but did not provide a specific estimate at that time.

The Pentagon’s estimate of China’s stockpile of nuclear warheads is lower than previously held expert assessments of China’s nuclear capabilities. Hans Kristensen and Matt Korda of the Federation of American Scientists estimated that China had 290 nuclear warheads in 2019, but the Pentagon’s assessment likely does not include warheads for weapons that have yet to become operational or for dormant bomber weapons, Kristensen and Korda said in a Sept. 1 article.

China has consistently shied away from disclosing the exact size of its nuclear stockpile or corroborating any estimates of its capabilities.

The report also describes China’s pursuit of nuclear-capable, land- and air-based missiles and a potential shift in its nuclear policy doctrine. Although Marshall Billingslea, U.S. special envoy for arms control, has claimed that China is in the midst of a “secretive crash nuclear buildup,” the Pentagon’s assessment does not appear to substantiate the envoy’s statement.

“China’s strategic intentions are transparent and consistent,” she said Sept. 2.

The report states that China is in the process of further developing its land-based missiles capable of delivering a nuclear weapon.

Within the next five years, according to the Pentagon’s report, China aims to deploy close to 200 warheads on its land-based ICBMs, which can threaten the United States.

China will also expand its current inventory of more than 200 DF-26 ground-launched, intermediate-range ballistic missiles that are capable of delivering nuclear and conventional warheads to the Pacific and Asian regions.

The Defense Department highlights speculation by Chinese strategists that Beijing may need a low-yield nuclear weapon to “increase the deterrence value of China’s nuclear force without defining specific nuclear yield values.” The report suggests that the DF-26 would be the most likely missile to carry a low-yield warhead due to its capacity to deliver precision strikes. China is not currently known to field any low-yield nuclear weapons.

China aims to diversify its nuclear triad by developing a nuclear-capable air-launched ballistic missile, says the report. During the October 2019 military parade, China revealed the H-6N as a long-range strategic bomber, which would be capable of carrying such a missile.

China’s nuclear policy doctrine, meanwhile, prioritizes the maintenance of a nuclear force so as to survive a first strike and soundly retaliate. Beijing has long held a no-first-use stance, but the Pentagon cites ambiguity with the conditions under which this policy would not hold. Some officers in the People’s Liberation Army have suggested that China should reserve the right to strike should the survival of its nuclear forces or regime be threatened, although no official statement on this front has been made.

Adm. Charles Richard, commander of U.S. Strategic Command, told reporters on Sept. 14 that he sees “China developing a stack of capabilities that would be inconsistent with a no-first-use policy.” But Caitlin Talmadge of the Brookings Institution noted in a Sept. 16 tweet that even if China is not moving away from a no-first-use policy, “survivability improvements to Chinese nuclear forces are likely to intensify competition with [the United States.]”

China stated in a 2019 defense white paper that it maintains a minimum nuclear deterrent, but the Pentagon report says that Beijing has placed its nuclear forces on a path to exceed the size of such a deterrent, making its posture “more consistent” with a limited deterrent, which Chinese armed forces have described as a level between a minimum and maximum deterrent.

Furthermore, as part of its nuclear policy, China has “almost certainly” kept the majority of its nuclear forces on a peacetime status, with launchers, missiles, and warheads separated. The Defense Department report claims, however, that Beijing is seeking to keep a portion of its forces on a launch-on-warning posture, which would require mating missiles and warheads. As evidence, the report cites exercises by the People’s Liberation Army Rocket Force that include “assigning a missile battalion to be ready to launch and rotating to standby positions as much as monthly for unspecified periods of time.” It also mentions an investment in silo-based forces and an improvement in early-warning capabilities and command and control, but this evidence is unclear and circumstantial, according to Kristensen and Korda.

Following the report’s release, Billingslea reiterated his insistence that China has a crash nuclear buildup program. Beijing needs to “come clean” about this program, he said in a Sept. 4 tweet, and “sit down for in-person talks, as so many nations have urged.”

Billingslea has led the Trump administration’s push to bring China into trilateral arms control talks with Russia, but China has so far rejected the U.S. effort, pointing to the difference in size of its nuclear arsenal as compared to those of the United States and Russia.

“We urge the United States to abandon the outdated Cold-War mentality and zero-game mindset,” said Hua on Sept. 2, and to “do more things that are conducive to the China-U.S. military-to-military relations.”

In the report, the Pentagon also estimates that China has achieved parity with or potentially exceeded the United States in its deployment of ground-launched ballistic missiles (GLBMs) and ground-launched cruise missiles (GLCM). Where China currently fields more than 1,250 land-based GLBMs and GLCMs, the United States only fields one, a short-range, conventional GLBM. This gap in capabilities demonstrates the steps that Beijing has taken over the past 20 years to “strengthen and modernize the [People’s Liberation Army] in nearly every
aspect,” the report says.

Beijing seeks to boast a “world-class” military by the end of 2049, according to the report.

China has not defined what it means by its ambition for such a military, but the report says that “it is likely that China will aim to develop a military by mid-century that is equal to—or in some cases superior to—the U.S. military, or that of any other great power that China views as a threat to its sovereignty, security, and development interests.”