“Your association has taken a significant role in fostering public awareness of nuclear disarmament and has led to its advancement.”
– Kazi Matsui
Mayor of Hiroshima
June 2, 2022
U.S., Allies Spar Over Iran Sanctions

The United States threatened to sanction any country that does not enforce UN restrictions on Iran that the Trump administration claims were reimposed last month, but the UN secretary-general said he will not take any steps to implement those measures, and other states dismissed U.S. claims as invalid. 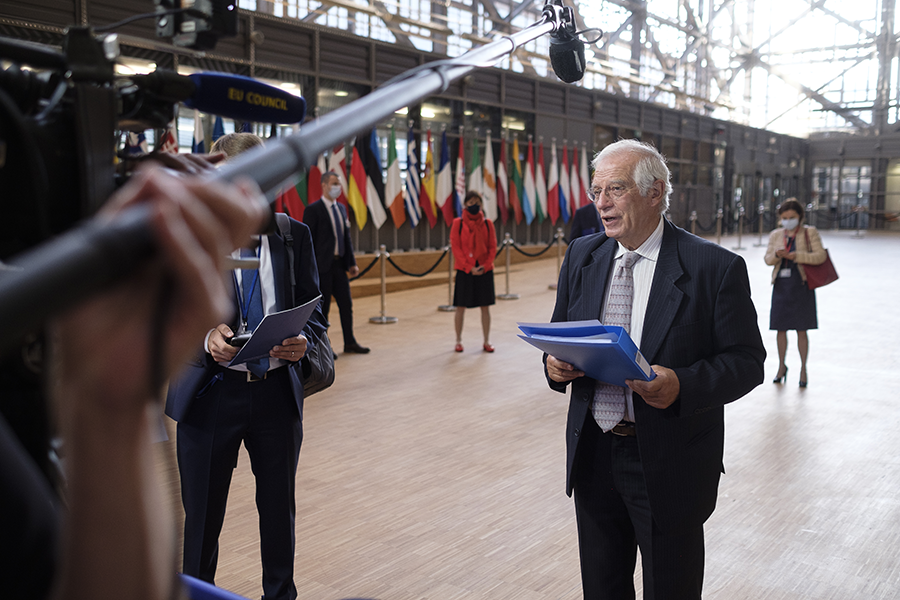 UN sanctions on Iran were lifted or modified in 2016 as part of the Joint Comprehensive Plan of Action (JCPOA), the seven-party deal that limited Iran’s nuclear activities. Recently, the Trump administration asserted on Sept. 19 that the sanctions had been restored after the United States initiated a so-called snapback mechanism, created by UN Security Council Resolution 2231, which contains language allowing participants in the nuclear deal to reimpose UN sanctions in a manner that cannot be vetoed. The U.S. withdrawal from the JCPOA in 2018 has created a dispute over U.S. standing to demand the return of UN sanctions under the terms of Resolution 2231.

U.S. Secretary of State Mike Pompeo said on Sept. 19 that the United States expects “all UN member states to fully comply with their obligations under these reimposed restrictions.” Pompeo said failure to do so would result in the United States using “domestic authorities to impose our consequences for those failures.” He later threatened that “no matter who you are, if you violate the UN arms embargo on Iran, you risk sanctions.”

But Reuters reported on Sept. 19 that UN Secretary-General António Guterres told the Security Council in a letter that due to “uncertainty” over the status of the UN sanctions, he will not take any action to implement the measures. Guterres said that “it is not for the secretary-general to proceed as if no such uncertainty exists.”

The same day, Majid Takht Ravanchi, Iran’s ambassador to the United Nations, tweeted the U.S. “illegal and false ‘deadline’ has come and gone” and that Security Council “member states continue to maintain [the] U.S. is NOT a JCPOA participant, so its claim of ‘snapback’ is null and void.”

The United States issued a snapback notification to the Security Council president and Guterres on Aug. 20, but Security Council members, including the presidents in August and September, rejected the Trump administration’s claim that it was entitled to use the mechanism in Resolution 2231 to reimpose UN sanctions. The Trump administration took that step after it failed to pass a Security Council resolution to extend the arms embargo on Iran, which is set to expire in October according to the terms of the nuclear deal and Resolution 2231. (See ACT, September 2020.)

The United States argues that it is still listed as a participant in the nuclear deal under Resolution 2231, despite having withdrawn from the accord. The Security Council presidents and other Security Council members, including the remaining parties to the nuclear deal, have argued that the United States lacks the standing to trigger a snapback, despite still being listed as a JCPOA participant.

In a Sept. 18 letter to the Security Council, France, Germany, and the United Kingdom said the U.S. snapback is “incapable of having any legal effect” due to Trump’s withdrawal from the JCPOA.

France, Germany, and the UK, along with Russia and China, are all parties to the JCPOA and sit on the Security Council.

EU foreign policy chief Josep Borrell, who coordinates the group of JCPOA participants known as the P4+1, said on Sept. 19 that “sanctions-lifting commitments under the JCPOA continue to apply.” He also referred to a Sept. 1 statement after a meeting of the P4+1 and Iran, which noted that the United States has not participated in JCPOA-related activities since it withdrew in May 2018 and “therefore could not be considered as a participant state.”

Russia’s ambassador to the UN tweeted more bluntly “Is Washington deaf?” and noted that “we all clearly said in August that U.S. claims to trigger snapback are illegitimate.”

Iranian President Hassan Rouhani expressed his appreciation at the UN General Assembly for the Security Council’s “decisive and resounding” rejection of the U.S. attempt to reimpose UN sanctions on Iran. The United States is in “self-created isolation,” he said on Sept. 22.

Despite the widespread rejection of the U.S. claim that UN sanctions were reimposed, the Trump administration issued a Sept. 21 executive order aimed specifically at sanctioning entities that engage in conventional arms trade with Iran. The order stated that “transfers to and from Iran of arms or related materiel or military equipment represent a continuing threat to regional and international security.”

It is unclear why the Trump administration issued the order, as existing U.S. authorities already allow the president to sanction arms transfers to and from Iran.

Iran views UN sanctions relief, specifically the expiring arms embargo, as one of the few remaining benefits of continued participation in the nuclear deal after the United States withdrew and reimposed U.S. sanctions in May 2018.

But given the U.S. sanctions on Iran’s arms sales, which remained in place even when the United States was a participant in the JCPOA, the EU embargo on Iranian arms sales, and other UN measures that prohibit arms sales to Lebanon and Yemen, Iranian arms transfers will still face a number of restrictions once the UN embargo expires in October.

The United States also announced on Sept. 21 specific sanctions against individuals that are “directly involved” in Iran’s production of enriched uranium in excess of the nuclear deal’s commitments and individuals involved in Iranian-North Korean missile cooperation.

Iran initially threatened to retaliate if the UN snapped back sanctions on Iran, but did not immediately announce any new steps to violate the accord or ratchet up existing nuclear activities in response to the Trump administration’s actions. The near-universal rejection of the U.S. attempt to reimpose the UN measures appears to have mollified Tehran.

Speaking at the Council on Foreign Relations on Sept. 21, Iranian Foreign Minister Mohammad Javad Zarif underscored Iran’s continued commitment to the nuclear deal and its willingness to return to full implementation if all parties do the same.

Iran will “absolutely not” renegotiate the JCPOA, he said, but a “more for more” deal may be possible if the United States commits under the nuclear deal “that it will not violate it again, that it will not make demands outside the scope of the deal, [and] that it will compensate Iran for the damages.”