May 2020
By Julia Masterson and Shannon Bugos

The global spread of the novel coronavirus has thrown into disarray the schedule of numerous international convenings on arms control and nonproliferation planned for this year. 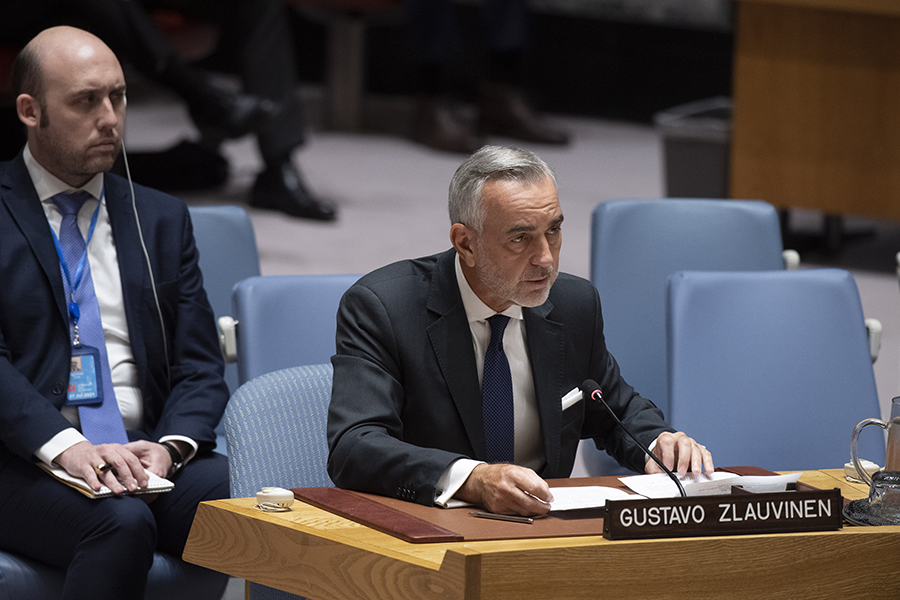 One of the largest conferences that has been postponed is the 10th review conference of the nuclear Nonproliferation Treaty (NPT), which will now take place no later than April 2021. (See ACT, April 2020.) Previously scheduled to begin April 27 at UN headquarters in New York City and last a month, the conference usually involves dozens of side events and the participation of hundreds of government officials from the 191 states-parties to the treaty, nongovernmental organizations, and meeting support personnel.

In a message dated April 17 to NPT states-parties, the president-designate of the review conference, Gustavo Zlauvinen, said, “Unfortunately, the lack of clarity surrounding when the current circumstances will end, combined with the number of General Assembly-mandated meetings that have been postponed, as well as the already heavy schedule of meetings for 2021, has led to significant constraints on the availability of rooms and conference services for the foreseeable future.”

Zlauvinen said that, “in light of those constraints, the only option that meets the requirements of States Parties between now and August 2021 is to hold the Review Conference at UN Headquarters from 4–29 January 2021.” He said he will seek a formal decision from states-parties to hold the review conference on those dates. Other options, he said, would require “significant downsizing, both in terms of the number of weeks for the Conference and the number of parallel meetings.”

The fourth conference of nuclear-weapon-free zones and Mongolia, scheduled to be held April 24, 2020, at the United Nations in New York, was also postponed. The group has met prior to NPT review conferences since 2005 to “analyze ways of cooperating that can contribute to achieving the universal goal of a nuclear-weapon-free world.” Participation in the conference is open to states-parties of the five extant free zones and Mongolia, which declared itself a nuclear-free territory in 2000. (See ACT, October 2012.) According to UN General Assembly Resolution 73/71, the conference planned for 2020, when held, will focus specifically on enhancing “consultations and cooperation” among the nuclear-free states. The April 24 conference has not been rescheduled.

The Comprehensive Test Ban Treaty Organization (CTBTO), located in Vienna, postponed its third Science Diplomacy Symposium likely until November. The CTBTO, which operates the International Monitoring System and data center to verify compliance with the 1996 Comprehensive Test Ban Treaty (CTBT), holds this symposium every two years in order to highlight the CTBT’s contribution to international peace and security. The 2020 symposium aims to spotlight the value of increasing access to and use of scientific advice in policymaking and collaboration and cooperation between scientists and policymakers.

The International Atomic Energy Agency (IAEA) postponed the 35th meeting of its Advisory Group on Nuclear Security scheduled to be held April 20–24 in Vienna. The group is comprised of experts who collaborate with the IAEA director-general to strengthen IAEA efforts to deter, detect, and react to nuclear and radiological terrorism. The group meets two times each year.

In the conventional arms space, Carlos Foradori of Argentina cancelled the April working group and preparatory meetings for the 6th Conference of States Parties to the Arms Trade Treaty, which entered into force in 2014 and currently has 104 states-parties. The conference is still scheduled for August 17–21. As president of the conference, Foradori made the decision based upon UN guidelines and said he will develop “a plan that will allow our work to continue remotely in the intersessional period to ensure necessary decisions can be taken by [the conference] guiding the work of the next … cycle.”

Meetings regarding emerging technologies have also been modified due to pandemic-related public health restrictions, including the Berlin Forum on Lethal Autonomous Weapons Systems, originally scheduled for April 1–2, 2020. Instead, the German Foreign Ministry opted to convene the meeting virtually, drawing participation by 300 governmental and nongovernmental representatives of 70 countries worldwide. A statement published April 2 by the ministry reminds that, “in times of crisis, it is crucial that we continue to address urgent issues through international cooperation.”

The forum met to exchange ideas on guiding principles for a future framework governing the use of lethal autonomous weapons systems. Participants discussed definitions of the human role in the use of lethal force and norms surrounding these systems. According to a readout of the virtual meeting published by the Campaign to Stop Killer Robots, the ministry intends to detail key points from the forum and to hold a follow-up conference in November 2020.

The majority of international events and conferences scheduled for late May or later have not yet officially addressed whether they will still take place. The second part of this year’s session of the Conference on Disarmament, for instance, remains scheduled to begin May 25. A meeting of the group of governmental experts on lethal autonomous weapons systems
is still planned for June. But the United States has shifted the 46th Group of Seven summit on June 10–12 to a video conference due to coronavirus concerns. The heads of state summit was originally intended to take place at Camp David, Maryland.