May 2020
By Julia Masterson

The new investigative team for the Organisation for the Prohibition of Chemical Weapons (OPCW) concluded in its inaugural report April 8 that Syria's air force was responsible for a series of chemical weapons attacks using sarin and chlorine in March 2017. 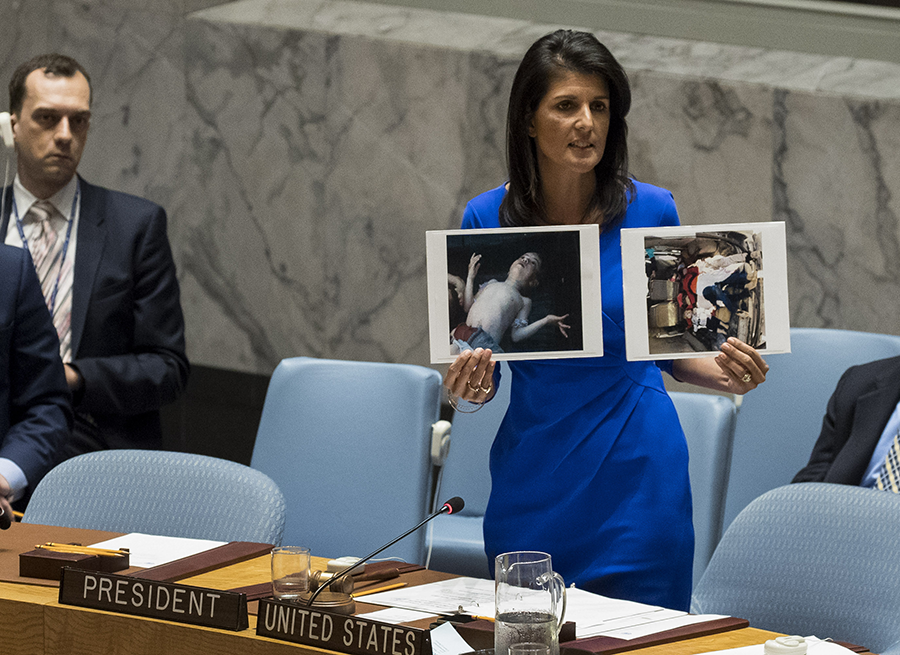 The OPCW Investigation and Identification Team began its work in June 2019 with a mandate to attribute responsibility for chemical weapons use in Syria, which has continued throughout the Syrian civil war and despite the destruction of the vast bulk of Syria’s declared chemical weapons stockpile following its accession to the Chemical Weapons Convention (CWC) in 2013.

The OPCW began investigating instances of chemical use in Syria in 2014 through its Fact-Finding Mission, which was created as an impartial body mandated to confirm only the use or nonuse of chemical weapons. In 2015 the UN Security Council adopted Resolution 2235 establishing the UN-OPCW Joint Investigative Mechanism (JIM) to attribute responsibility for the chemical attacks identified by the mission.

But after the JIM implicated the Syrian government in four of the six chemical incidents it investigated, Russia vetoed the extension of the UN Security Council mandate in 2017. (See ACT, December 2017.)

In response, the majority of OPCW states-parties sought new ways to continue investigative work and hold CWC violators accountable. In 2018, two-thirds of the OPCW Conference of States Parties voted to establish the investigative team. Now, the team continues the attribution work of the JIM under the sole authority of the OPCW, seeking to name the perpetrators responsible for the chemical attacks identified by the mission but not previously investigated by the joint UN-OPCW body. (See ACT, July/August 2018.)

The team’s first report focuses on chemical attacks on March 24, March 25, and March 30, 2017, in the rebel-held town of Ltamenah, Syria. Through interviews with witnesses, analyses of flight data, and other investigative methods, the team concluded that the Syrian air force released sarin on March 24 and March 30 and chlorine on March 25 from military airplanes and helicopters.

The team also identified a key chemical component linking the sarin dropped over Ltamenah to sarin produced by the Syrian government. During a 2017 JIM investigation into chemical weapons use in Khan Shaykuhn, Syria, inspectors compared recovered chemical munitions to samples retained in OPCW labs after Syria’s chemical weapons destruction and identified the shared presence of an impurity called phosphorus hexafluoride. The OPCW established that Syria uses phosphorus hexafluoride in its production of methylphosphonyl difluoride, which is a precursor chemical of sarin and creates the volatile nerve agent when combined with isopropyl alcohol and hexamine.

According to a JIM report released in October 2017, the OPCW regards the impurity as a “marker chemical” for methylphosphonyl difluoride produced in Syrian labs. During its investigation into the Ltamenah attacks, the team compared a sample of a munition recovered from the March 30 attack to the methylphosphonyl difluoride in Syria’s stockpile and found a strong correlation, indicating that the sarin used in Ltamenah was created using chemicals originating in the Syrian stockpile.

The team confirmed that the attacks could only “occur pursuant to the orders from the highest levels of the Syrian Arab Armed Forces” and that the commander in chief of the armed forces, Syrian President Bashar al-Assad, was the “lead decision maker.” The team also learned during its investigation that senior Syrian military officials involved with the country’s chemical weapons program were ordered March 21, 2017, to “prepare items for use in the defense of the Hama,” the area within which Ltamenah is located.

Following release of the report, U.S. Secretary of State Michael Pompeo in an April 8 press release commended the team’s work and called on “other nations to join our efforts to promote accountability for the Syrian regime and uphold the norm against chemical weapons use.”

With the ongoing coronavirus pandemic preventing an in-person meeting of the OPCW Executive Council, the German Foreign Ministry urged in an April 15 statement that the council meet at the earliest possible opportunity to “take up the case” of Syrian noncompliance.

Despite widespread support for the OPCW team, efforts by some nations to undermine the OPCW’s credibility and question its findings continue. In an April 9 statement broadcast by the Syrian Arab News Agency, the Syrian Foreign and Expatriates Ministry disputed the team’s findings and said that Syria “condemns, in the strongest terms, what has come in the report of the illegitimate so-called Investigation and Identification Team, and rejects what has been concluded in it, in form and content.”

The Russian Foreign Ministry also denounced the team’s findings, claiming on April 9 that the report’s authors are “accomplices in the consistent violation of the basic principles and procedures of objective and unbiased investigations stipulated in the CWC.” According to Wyn Bowen, a former weapons inspector who now heads the School of Security Studies at King’s College London, “Moscow’s statements and actions around the OPCW appear to constitute a concerted effort to undermine the CWC and norms against chemical weapons development, ownership, and use.”

Russia’s endeavors to systematically discredit the OPCW may pose a problem as the international community seeks to hold perpetrators identified by the team accountable for their actions. Given the chemical signature confirming that the sarin used March 24 and 30, 2017, was produced in a Syrian lab and the flight data attributing all three incidents to Syrian military aircraft, the team’s report leaves little room for doubt about the role of the Syrian government in the March 2017 chemical attacks.

The team’s mandate extends to some 33 chemical incidents in Syria that were identified in prior investigations by the Fact-Finding Mission and where perpetrators were not named by the JIM. The April 8 report marks the first of several attribution reports by the new investigative body.