May 2020
By Daryl G. Kimball and Randy Rydell

The fifth review conference of the nuclear Nonproliferation Treaty (NPT), held from April to May 1995, like previous review conferences sought to assess implementation and compliance with the treaty’s obligations and to explore ways to address shortcomings. 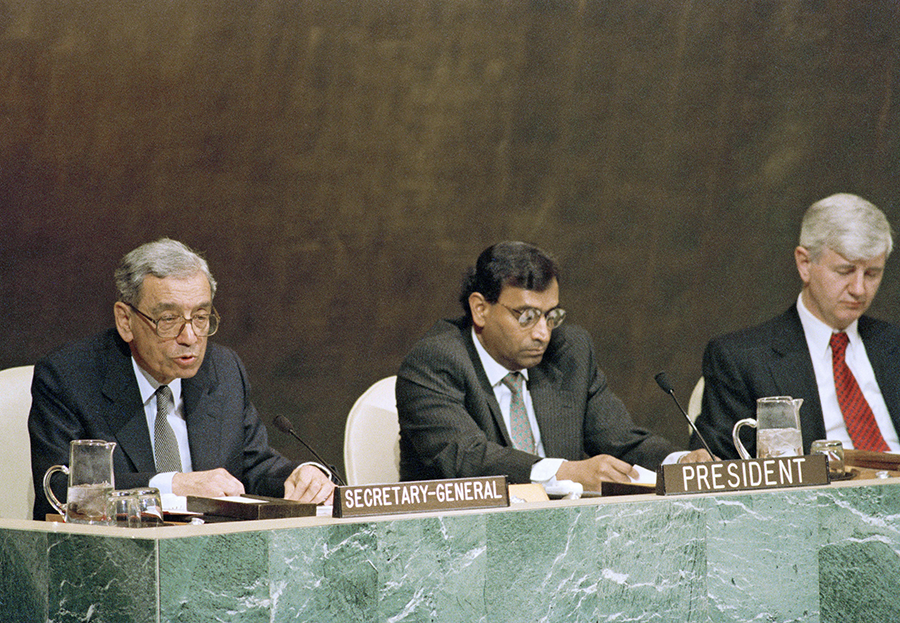 The 1995 NPT Review and Extension Conference also had another formal purpose. Article X of the NPT called for a conference of states-parties to be held 25 years after the treaty’s entry into force in order “to decide whether the [t]reaty shall continue in force indefinitely, or shall be extended for an additional fixed period or periods.”

Although the treaty provided that the extension would be determined by a majority vote, the parties felt that such a key decision should, if possible, be reached by consensus. Achieving that consensus proved to be one of the most difficult challenges in the history of multilateral diplomacy.1

The 1995 conference began with considerable uncertainty regarding the nature of any extension. Non-nuclear-weapon states, particularly developing countries belonging to the Nonaligned Movement, expressed disappointment with the lack of progress toward nuclear disarmament and feared that a decision to extend the treaty indefinitely would by default enable the nuclear-armed states to hold on to their nuclear arsenals in perpetuity and avoid any accountability in eliminating them.

At the conference, Indonesia and South Africa proposed tying the treaty’s indefinite extension to a decision to strengthen the treaty review process. They also linked it to the establishment of a set of principles and objectives on nuclear nonproliferation and disarmament to hold NPT states-parties, particularly the nuclear-weapon states, accountable to their commitments. Although only a majority of states-parties was required to approve the indefinite extension, the agreed package of decisions obtained enough support that such a vote was not required. In short, there was a consensus that a majority existed for the indefinite extension.

The conference resulted in three decisions and a resolution that the parties heralded as a “package deal.” The integrated nature of the package deal—a feature insisted upon by Indonesia, South Africa, and many other states—gave the review process a sharper focus and clarified its ends. Certain positive steps by the nuclear-weapon states before the conference, including a consistent pattern of strong U.S. support for the Comprehensive Nuclear-Test-Ban Treaty (CTBT), likely contributed to the successful outcome.

This decision provided for five-year review conferences, each preceded by three sessions of a Preparatory Committee of states-parties. These conferences would have three main committees, which could have “subsidiary bodies” on specific issues. It also clarified that in the future the review process would examine “principles, objectives, and ways,” including those in Decision 2, and would “look forward as well as back.” As Canadian Ambassador Christopher Westdal put it, the goal was “permanence with accountability.”

The second decision set forth some “principles and objectives” for assessing progress in the following areas: universality; nonproliferation; disarmament; nuclear-weapon-free zones; security assurances; safeguards; and the peaceful uses of nuclear energy.

For example, the decision laid out a “program of action” for disarmament, including:

At the 1995 conference, states-parties also clarified that the treaty’s “inalienable right” to peaceful uses of nuclear energy must be applied “in conformity with Articles I, II as well as III of the [t]reaty,” which relate to nonproliferation and compliance with International Atomic Energy Agency safeguards. They expanded support for the principle that new nuclear “supply arrangements” should require full-scope IAEA safeguards “as a necessary precondition” (i.e., safeguards over all nuclear materials of the importing, non-nuclear-weapon state). India and Pakistan—both NPT nonparties—had been seeking to avoid this precondition, which was later ignored by many nuclear supplier states after the U.S. initiative in 2005 to allow for expanded nuclear cooperation with India.

The crucial third decision was based on a simple declaratory statement that, “as a majority exists” among the parties to extend the treaty indefinitely, the treaty shall continue in force indefinitely. The decision’s preamble contained language “emphasizing” the other decisions, which further affirmed the linkages in the package deal.

Resolution on the Middle East

The last key component of the package deal was the Resolution on the Middle East, which, inter alia, endorsed the creation of a Middle Eastern “zone free of nuclear weapons as well as other weapons of mass destruction,” (WMD) including “their delivery systems.” The NPT’s indefinite extension without a vote would not have been possible without addressing this issue—a long-standing goal of the Arab states and many other parties.

A quarter-century later, global support for the NPT is strong, but its long-term viability cannot be taken for granted, especially if the agreed goals and objectives from 1995 are not achieved.

1. Portions of this summary include excerpts from Rydell’s article “Looking Back: The 1995 Nuclear Nonproliferation Treaty Review and Extension Conference,” in the April 2005 issue of Arms Control Today. See also Jayantha Dhanapala and Randy Rydell, Multilateral Diplomacy and the NPT: An Insider’s Account (UNIDIR, 2005), https://www.unidir.org/publication/multilateral-diplomacy-and-npt-insiders-account.