“Your association has taken a significant role in fostering public awareness of nuclear disarmament and has led to its advancement.”
– Kazi Matsui
Mayor of Hiroshima
June 2, 2022
U.S. Conducts Special Open Skies Flight

The United States and several allies on Dec. 6 conducted an “extraordinary flight” over eastern Ukraine under the Open Skies Treaty, the first and only treaty flight worldwide during 2018. 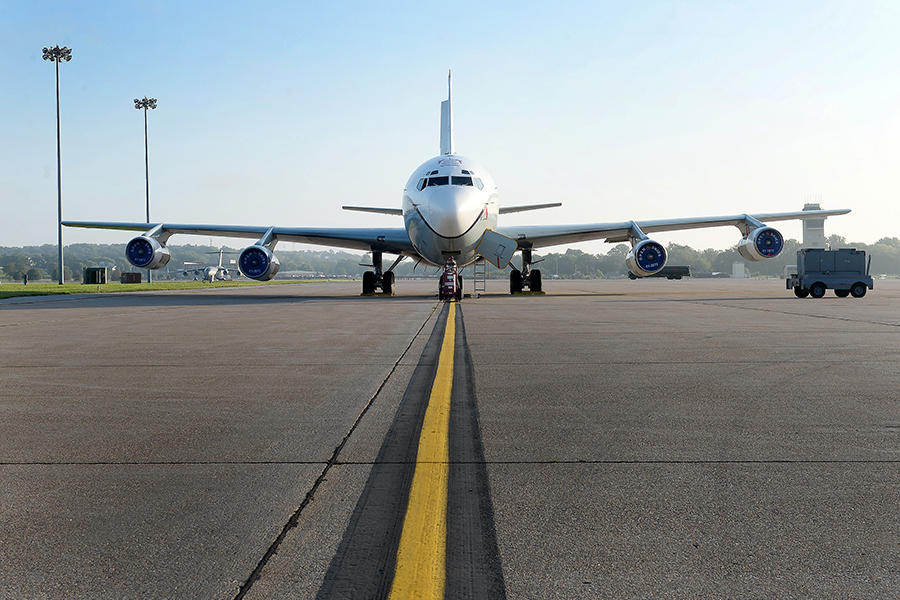 The flight followed a Russian attack in late November on Ukrainian naval vessels in the Black Sea and as Ukraine said Russia has been increasing its forces near its border with Ukraine.

The U.S. Defense Department said U.S., Canadian, French, German, Romanian, UK, and Ukrainian observers were aboard the OC-135B aircraft during the observation flight, which was requested by Ukraine.

“The timing of this flight is intended to reaffirm U.S. commitment to Ukraine and other partner nations,” the Defense Department said in a Dec. 6 news release.

“Russia's unprovoked attack on Ukrainian naval vessels in the Black Sea near the Kerch Strait is a dangerous escalation in a pattern of increasingly provocative and threatening activity,” the statement added.

The treaty, which entered into force in 2002 and has 34 states-parties, aims to increase confidence in and transparency of military activities, particularly in Europe, by allowing unarmed aerial observation flights over the entire territory of its participants for information-gathering purposes. The parties have yearly quotas on overflights and must make the information they acquire available to all treaty parties.

For example, the treaty permits up to 42 overflights of Russia by states-parties, of which 16 can be flown by the United States.

A dispute between Georgia and Russia over the inclusion of Russian observers on treaty flights over Georgia prevented agreement on quotas for 2018, thereby freezing flights for all member states.

But the treaty includes a provision allowing for two states-parties “on a bilateral and voluntary basis to conduct observation flights over the territory of each other.” The last such extraordinary observation flight over Ukraine took place in 2014 as part of the U.S. response to Russia’s annexation of Crimea.

Normal flights appear set to resume in 2019. States-parties at an Oct. 22 meeting of the Open Skies Consultative Commission, the treaty’s implementing body, agreed to active quotas for observation flights this year.

In recent years, disputes over implementation and concerns from some U.S. officials and lawmakers about the value of the treaty have threatened to derail the pact.

The agreement on quotas for 2019 followed a U.S. decision in September not to certify a new Russian aircraft outfitted with an upgraded digital electro-optical camera for flights under the treaty, a decision that was reversed several days later. (See ACT, October 2018.)

Washington for several years has raised numerous concerns about Russian compliance with the pact. The State Department’s annual compliance report released in April determined that Russia is violating the treaty by restricting observation flights over Kaliningrad, which is a sensitive Russian enclave between Poland and Lithuania, to no more than 500 kilometers, and within a 10-kilometer corridor along Russia’s border with the Georgian border-conflict regions of South Ossetia and Abkhazia.

The United States said the 500-kilometer restriction is about half the distance needed to fully cover Kaliningrad and, in response, has placed restrictions on some of Russia’s treaty flights.

Andrea Thompson, U.S. undersecretary of state for arms control and international security, told the Senate Foreign Relations Committee on Sept. 18 that “recently Russia has resolved one violation of its obligations and has made overtures that suggest it could resolve another.” But she added that Russia had refused to address the violation related to Kaliningrad.

The Open Skies Treaty has also become a point of contention in Congress. (See ACT, July/August 2018.)

The fiscal year 2019 defense authorization act, signed into law by President Donald Trump on Aug. 13, waters down language in the original U.S. House of Representatives version of the bill that would have blocked the Air Force’s budget request to replace the aircraft that the United States uses to conduct Open Skies Treaty flights, including over Russia. Instead, the law conditions funding necessary to acquire an upgraded digital imaging system for treaty flights and implement certain decisions of the treaty’s implementing body.