North Korea reiterated that denuclearization of the Korean peninsula must include removal of U.S. nuclear weapons in the region, a statement that underscores that diplomatic advances in 2019 will require addressing simultaneously North Korea’s nuclear weapons program and its security concerns. 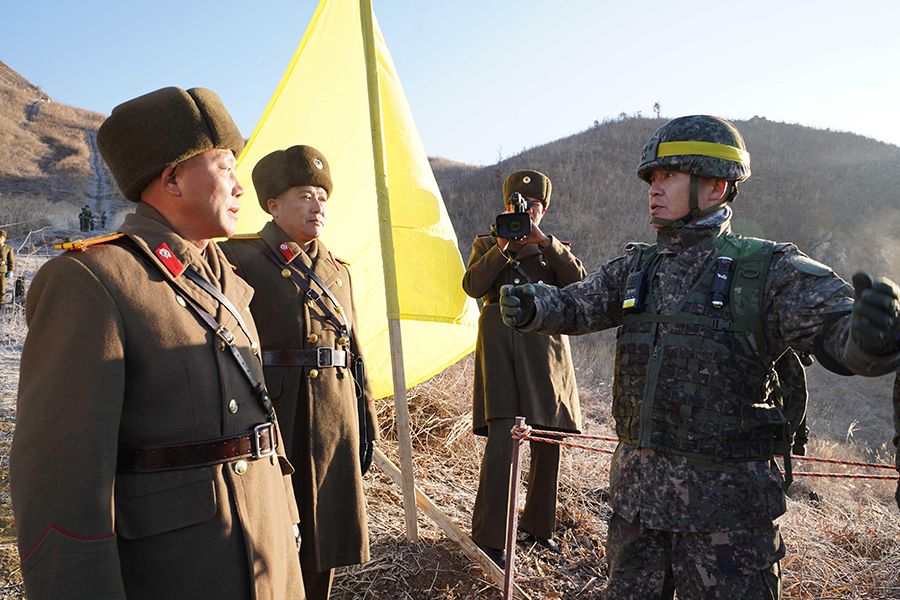 The state-run Korean Central News Agency said on Dec. 20 that denuclearization means “removing all elements of nuclear threats from the areas of both the north and the south of Korea and also from surrounding areas from where the Korean peninsula is targeted.” The United States has focused on a deal in which North Korea gives up its nuclear weapons and related facilities in return for a lifting of U.S. and UN sanctions and possibly ending the Korean War.

The United States removed its tactical nuclear weapons from South Korea in 1991, but the country remains under the U.S. nuclear umbrella, and U.S. troops are stationed in South Korea and Japan. U.S. President Donald Trump announced in June that certain joint military exercises between the United States and South Korea would be suspended, and subsequent exercises were modified, but North Korea is still looking for the United States to take additional steps to address its security concerns.

With little negotiating progress evident in late 2018, Trump said he is in no rush for an agreement with North Korean leader Kim Jong Un, even though he had sharply criticized President Barack Obama’s policy of “strategic patience” as Pyongyang increased its nuclear and missile capabilities.

The apparent impasse increases the stakes heading to a second Trump-Kim summit, which U.S. Secretary of State Mike Pompeo said during a Dec. 20 radio interview is expected “not too long after the first of the year.”

Kim, in his annual New Year’s address Jan. 1, said that he is “ready to meet the U.S. president again anytime” but that it is up to the United States to take the next steps. If the United States “responds to our proactive, prior efforts with trustworthy measures and corresponding practical actions, bilateral relations will develop wonderfully at a fast pace through the taking of more definite and epochal measures,” he said.

Kim warned, however, that if the United States fails to follow through, persists in imposing sanctions, and attempts to “unilaterally enforce something,” North Korea “may be compelled to find a new way for defending the sovereignty of the country and supreme interests of the state and for achieving peace and stability on the Korean peninsula.”

Kim referenced North Korea’s decision to suspend its nuclear warhead and missile tests in 2018, which Trump frequently cites, as evidence of its commitment to denuclearization, but North Korea is thought to be increasing its stockpile of nuclear materials for warheads. As a result, time works in Pyongyang’s favor and may make a diplomatic solution more difficult.

Further, the protest resignation of U.S. Defense Secretary Jim Mattis, a strong advocate of the U.S.-South Korean military alliance, may raise anxieties in Seoul even as President Moon Jae-in has worked to ease tensions with Pyongyang.

That is because the Trump administration is pressing Seoul to bear more of the burden for keeping 28,500 U.S. troops in South Korea, leading to speculation that Trump might be willing to pull out some U.S. forces in a concession to Kim. The U.S. troops help with South Korea’s defense preparations and act as a trip wire to reassure South Koreans that the United States would engage if the North attacks.

North Korea’s Institute for American Studies at the Ministry of Foreign Affairs reiterated in a Dec. 17 commentary that North Korea is waiting for the United States to take action to move the process forward, arguing that Pyongyang has taken “proactive denuclearization steps” and Washington must respond in a corresponding manner.

North Korea’s expansive definition of denuclearization is not new. Pyongyang made a similar statement in July 2016 emphasizing that U.S. nuclear weapons in the region must be part of the diplomatic process.

This list might provide insight as to what Pyongyang will be wanting from Washington if talks progress.

It was also clear after Trump and Kim met in Singapore in June that Washington and Pyongyang do not share the same definition of denuclearization, which many experts predicted could complicate negotiations.

At a July hearing held by the U.S. Senate Foreign Relations Committee, Pompeo was pressed on whether the two countries agree on what constitutes the Singapore summit’s commitment to pursue denuclearization of the Korean peninsula.

Pompeo said that the United States shared its definition with Pyongyang and that North Korea “understands” U.S. expectations for what that process will accomplish, but he would not confirm that North Korea agreed with the U.S. terms.

North Korea may be emphasizing its definition of denuclearization to influence the diplomatic process going forward.

Since the June summit in Singapore, negotiations between the United States and North Korea have failed to gain traction. Initially, the U.S. insistence that Pyongyang complete denuclearization before any U.S. concessions on sanctions or an end of the Korean War appeared to stymie progress, as North Korea insisted on a step-by-step approach with each side taking reciprocal actions.

North Korea’s Dec. 20 commentary may be intended as a reminder that Pyongyang expects the United States to take steps that address Pyongyang’s security concerns as the country rolls back its nuclear weapons program.

The Dec. 17 commentary made a similar point, stating that the United States must realize “before it is too late” that maximum pressure will not work and Washington should take a “sincere approach to implementing” the Singapore statement.

Pompeo’s visit to Pyongyang in November initially appeared to reinvigorate the process when the two sides agreed to more regular contacts and the establishment of working groups, but there has been little evidence that these developments are being realized. Still, Pompeo described the negotiations thus far as a “great process” in a Dec. 21 interview with NPR.

Although the announcement of working groups meeting regularly would be a step forward in establishing a process for negotiations to proceed, commentary from North Korea suggests that Pyongyang may prefer to deal directly with Trump.

The Dec. 17 statement said that Trump “avails himself of every possible occasion to state his willingness to improve [North Korean-U.S.] relations” and targeted the U.S. State Department as “bent on bringing” the relationship between the United States and North Korea “back to the status of last year which was marked by exchanges of fire.”