When states-parties to the Chemical Weapons Convention (CWC) gathered in The Hague in late November to review the treaty, their work to uphold the norm against chemical weapons amid repeated use in Syria was challenged by a country that had played a leading role in negotiating the accord. 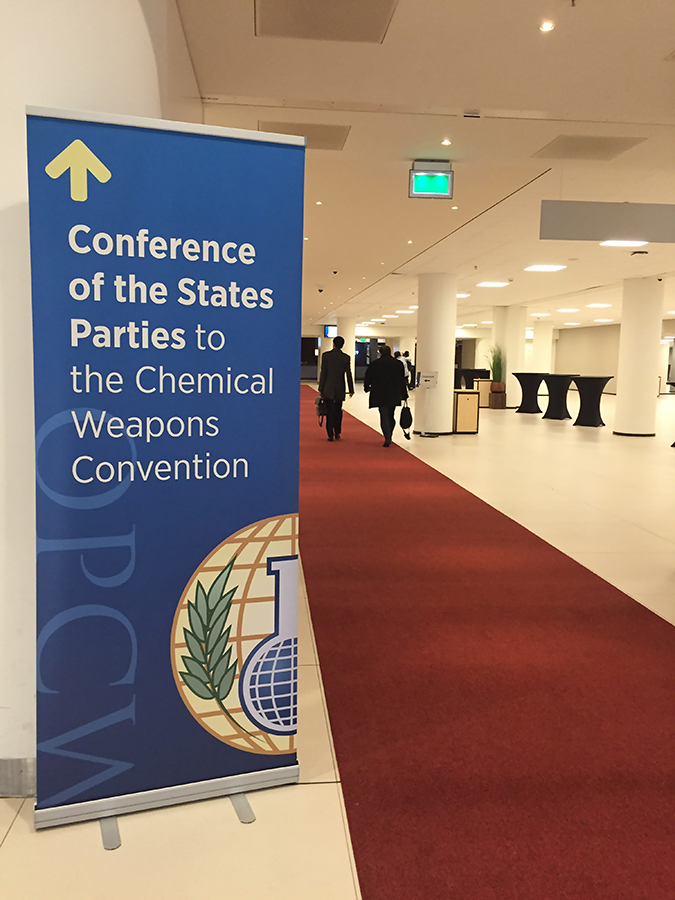 Russia, now seeking to cover for a Middle Eastern ally, tried largely unsuccessfully to thwart international efforts to investigate chemical weapons use by the Syrian regime. Moscow’s actions defied the international consensus that has undergirded the legal prohibitions on the development, production, stockpiling, and use of chemical weapons.

Together with the United States, Russia had worked to secure the adoption of the 1997 chemical weapons ban and for many years played a constructive role in upholding the treaty. In 2013, Russia forged a deal to eliminate more than 1,300 metric tons of Syrian chemical weapons. In 2015 it agreed to a United Nations-Organisation for the Prohibition of Chemical Weapons (OPCW) Joint Investigative Mechanism (JIM) to investigate chemical weapons users in Syria.

Over the past several years, however, Russian behavior regarding chemical weapons shifted dramatically. In March, Russia blatantly violated the convention by using a nerve agent in the attempted assassination of a former Russian spy in the United Kingdom. (See ACT, April 2018.)

It has also worked more subtly to weaken or eliminate the chemical weapons investigations it had once helped to construct. In November 2017, Russia vetoed the extension of the JIM mandate. (See ACT, December 2017.) Russia had increasingly belittled the reports that found that the Syrian military uses chemical weapons against rebels and civilians.

With Russia exercising its Security Council veto to block efforts to restart investigations, a special session of CWC states-parties sought to get around Russia by voting in June 2018 to create a new investigative body through the OPCW. (See ACT, July/August 2018.)

The dispute spilled over to the sessions of the CWC annual conference of states-parties and the five-year review conference held Nov. 21–30, where Russia sought to obstruct implementation of the June decision.

At the start of the conference, Russia, joined by China, introduced a draft decision that would have postponed the beginning of investigations until after an open-ended working group had reviewed the decision to start investigations. The Russian effort failed by a vote of 82–30.

Russia and Iran then fought to amend and vote down the 2019 OPCW program and budget. The program and budget is typically agreed by consensus in the OPCW Executive Council meeting preceding the conference of states-parties.

This year, however, Russia refused to accept the proposed budget that included funding for an investigative mechanism to attribute chemical weapons attacks, and so the budget was brought to a vote at the conference. The budget passed by a vote of 99 to 27, after rejections of Russian and Iranian amendments that would have gutted the budget’s allocated funds for the investigations.

States-parties did succeed in adopting a final conference report, but only after a delay due to difficulty in agreeing on final report language. As a result of the dispute, however, states-parties for the first time in CWC history failed to reach consensus on a final document at the subsequent treaty review conference.

Russia’s success in blocking a consensus review conference document and forcing the OPCW budget to a vote undercut what was otherwise near-universal international support for the norms represented by the CWC.

“We should be under no illusion as to why we have not reached consensus,” the United Kingdom said in a statement Nov. 30. “A very small minority who have used, or defended those that use, chemical weapons have obstructed our efforts.”

For its part, Russia accused the West of breaking consensus. Russia has repeatedly denied that it is seeking to obstruct the chemical weapons ban. “Our critics may rest easy: we are not trying to ‘kill’ the budget of the organization thus paralyzing the implementation of the tasks of the convention. Quite the opposite: we are trying to find the only possible consensus-based variant of the budget,” Georgy Kalamanov, Russian deputy minister of industry and trade, told the conference of states-parties on Nov. 19.

Some analysts now wonder what Russia’s next move will be to undermine the new investigative body, which it has repeatedly characterized as “illegitimate.” Jean Pascal Zanders, an independent disarmament researcher who runs The Trench website, told Arms Control Today in a Dec. 17 interview that Russian and Syrian actions immediately following the approval of the OPCW budget could be indicative of their future strategy.

On Nov. 24, Russia and Syria announced a chlorine gas attack that it attributed to rebel groups in northwestern Aleppo, which analysts and Western governments have since denounced as staged or inaccurate. Syria formally requested that the OPCW investigate the attack.

“It is likely that this was either a staged incident intended to frame the opposition, or an operation which went wrong and from which Russia and the regime sought to take advantage,” the UK Foreign and Commonwealth Office wrote in a press release on Dec. 7. The United States alleged in a State Department press release on the same day that Syrian and Russian personnel likely used tear gas against civilians on Nov. 24. Local reports have not shown any indication of chlorine gas, Zanders said.

Furthermore, the United States expressed concern that Syrian forces retained control of the site where the attack occurred, “allowing them to potentially fabricate samples and contaminate the site before a proper investigation” by the OPCW.

Russia and Syria have failed to block investigations, but they could attempt to prevent investigations from operating effectively, by actions such as seeking to waste limited OPCW resources with investigations of staged incidents or providing tampered evidence to investigators. “You can see how this is a trap that could be sprung,” said Zanders.