“Over the past 50 years, ACA has contributed to bridging diversity, equity, inclusion and that's by ensuring that women of color are elevated in this space.”
– Shalonda Spencer
Women of Color Advancing Peace, Security, and Conflict Transformation
June 2, 2022
Smith, Inhofe Clash on Nukes

The incoming chairmen of the House and Senate armed services committees ended 2018 by trading blows on nuclear weapons policy, presaging what is poised to be a contentious fight between Democrats and Republicans on the issue during the 116th Congress. 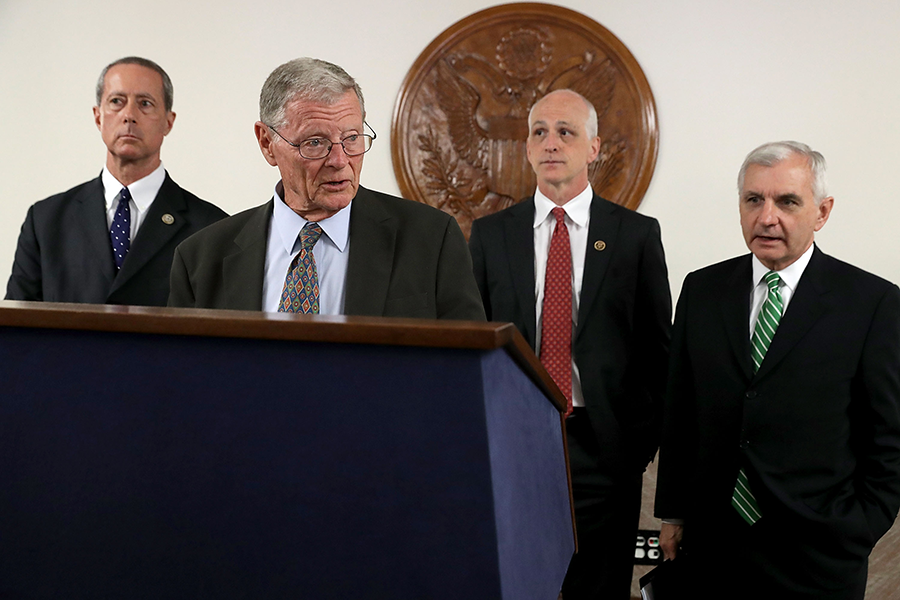 Rep. Adam Smith (D-Wash.) has long maintained that the United States has more nuclear weapons than it needs for its security and can reasonably afford. This has raised the ire of Sen. James Inhofe (R-Okla.), who has expressed strong support for the Trump administration’s 2018 Nuclear Posture Review (NPR) report and its emphasis on augmenting the role of nuclear weapons and developing new nuclear capabilities. (See ACT, March 2018.)

President Donald Trump has declared his intention to withdraw from the INF Treaty in February if Russia does not return to compliance with the agreement and has yet to decide whether to extend New START by up to five years as allowed by the treaty.

In response to Smith’s comments, Inhofe told reporters that rebuilding the nuclear arsenal “is the most important area of” upgrading the military.

“I don’t know why Smith or anyone else would single out nuclear modernization as an area to cut,” Inhofe said. “That allows someone who’s not otherwise a formidable opponent to destroy the United States of America.”

As a result of the midterm elections on Nov. 6, Democrats gained 40 seats and retook control of the House of Representatives. As chairman of the House Armed Services Committee, Smith will have a platform to conduct aggressive oversight of the Trump administration’s nuclear policy and spending proposals, especially through the annual national defense authorization process.

The annual bill, which has been passed and enacted each year for 58 years in a row, establishes spending ceilings and legal guidelines for Defense Department programs and the activities conducted by the Energy Department’s semiautonomous National Nuclear Security Administration (NNSA).

Smith has indicated that he plans to oppose continued funding to develop and field the two new, low-yield nuclear capabilities proposed by the NPR report. Those are a low-yield warhead option for submarine-launched ballistic missiles and a new sea-launched cruise missile.

Such actions by Smith would set up a clash with the Republican-controlled Senate Armed Services Committee, which will strongly support the Trump plans under Inhofe.

Although Smith and Inhofe will have considerable say over the direction of U.S. nuclear policy, congressional appropriators wield the most power over funding decisions.

During the first two years of the Trump administration, not only has the Republican-controlled Congress backed the administration’s hefty budget requests for nuclear modernization, but in some cases it has increased funding above the requested levels. (See ACT, November 2018.)

Congress largely supported the Obama administration’s spending plans as well, but not without controversy. For example, the Democratic-controlled Senate Appropriations Committee sought to scale back NNSA plans for the B61 mod 12 life extension program (LEP) in 2013 and block funding for the W80-4 ALCM warhead LEP in 2014. Both efforts were ultimately unsuccessful. (See ACT, January/February 2015.)

While Smith and Inhofe were drawing their own personal battle lines, other lawmakers closed out 2018 by issuing additional partisan salvos in response to the Trump administration’s NPR and intention to withdraw from the INF Treaty.

In a Nov. 29 letter led by Sen. Jon Kyl (R-Ariz.), 25 Republican senators urged Trump to think twice before supporting an extension of New START due to Russia’s violation of several international agreements, the imbalance posed by Russia’s development and modernization of nuclear capabilities unlimited by arms control agreements, and the growth of China’s nuclear arsenal. The letter added “that continued funding of the U.S. strategic modernization program, including for low-yield warhead options, as proposed in your [NPR], is critical in the face of dangerous international security developments since the New START was ratified.”

Two weeks later, on Dec. 13, 26 Democratic senators called on the president to address Russia’s violations of the INF Treaty instead of unilaterally withdrawing from the agreement and for him to extend New START.

“A collapse of the INF Treaty and failure to renew New START would lead to the absence of verifiable limits on U.S. and Russian nuclear forces for the first time since the early 1970,” the letter said.

The Democratic senators added that the administration’s “proposed new types of nuclear weapons threaten the bipartisan consensus that investments in the U.S. nuclear weapons deterrent and supporting infrastructure must be accompanied by pursuit of continued arms control measures.”