Tensions between the United States and North Korea moved into dangerous new territory last month, as two inexperienced national leaders engaged in name-calling backed up by threats of nuclear conflict.

It remains unclear whether the tension that has been increasing for months, as North Korean leader Kim Jong Un defied international pressure to halt his nuclear weapons program, will drive a serious effort for negotiations or trigger, intentionally or by accident, military action that could cause tens or hundreds of thousands of deaths on the Korean peninsula and perhaps beyond.

Complicating matters is the fact that the two key decision-makers, Kim and U.S. President Donald Trump, are untested in such diplomatic crisis situations and have shown tendencies to provoke further confrontation.

Addressing the UN General Assembly on Sept. 19, Trump belittled Kim as “rocket man” and used the podium of the world’s pre-eminent peacemaking institution to threaten to “totally destroy” North Korea if the United States “is forced to defend itself or its allies.” In doing so, the Los Angeles Times reported, Trump ignored appeals from his national security team not to make the situation more dangerous and the path to negotiations more daunting by insulting the young dictator.

Kim quickly responded in kind and, for the first time, personally issued a statement directed at a U.S. president, saying that Trump barks like a “frightened dog” and is a “mentally deranged U.S. dotard,” which is a senile or weak-minded individual.

In a sign of further defiance, North Korean Foreign Minister Ri Yong Ho was quoted Sept. 21 as telling journalists in New York, where he was attending the UN session, that Kim is considering whether to test a hydrogen bomb in the Pacific Ocean, which would be the first atmospheric nuclear test explosion since China conducted one on Oct. 16, 1980.

Ri was likely referring to launching an intercontinental ballistic missile paired with a nuclear warhead into the Pacific Ocean to demonstrate North Korea’s capabilities. That would be a profoundly provocative action, with environmental and health implications from the radioactive fallout, and defy the norm against atmospheric nuclear tests established by the 1963 Partial Test Ban Treaty.

Trump fired back at Kim using his favored communications weapon, Twitter, writing that “Kim Jong Un of North Korea, who is obviously a madman who doesn’t mind starving or killing his people, will be tested like never before!” Less provocatively, U.S. Secretary of State Rex Tillerson said on Sept. 22 on ABC’s “Good Morning America” that “we will continue our efforts in the diplomatic arena, but all our military options are on the table.”

Yet, any military option comes with significant risks, particularly with South Korea’s capital, Seoul, within range of North Korea artillery just north of the Demilitarized Zone, which may dismiss it as a viable solution.

Trump’s former chief strategist, Steve Bannon, told The American Prospect in August, “Until somebody solves the part of the equation that shows me that ten million people in Seoul don’t die in the first 30 minutes from conventional weapons, I don’t know what you’re talking about, there’s no military solution here, they got us.” Defense Secretary Jim Mattis subsequently said, without providing any details, that the United States has military options that would not put Seoul at risk.

The Trump administration has paired its threats with additional sanctions targeting North Korea. Trump issued an executive order Sept. 21 that targets banks and companies that continue to do business with North Korea. U.S. Treasury Secretary Steven Mnuchin said that Washington has the tools to “cut off banks from the banking system in the United States.”

“For much too long, North Korea has been allowed to abuse the international financial system to facilitate funding for its nuclear weapons and missile program,” Trump said in announcing the measures.

Significantly, China’s central bank agreed to cooperate and directed financial institutions throughout China to curtail their loans and other business with North Korea and the North Korean government.

In his address to the UN General Assembly on Sept. 23, Ri said it was a “forlorn hope to consider any chance that [North Korea] would be shaken an inch or change its stance due to the harsher sanctions by the hostile forces.” Ri also called out Trump’s “reckless and violent” words and said that, by insulting North Korea, he made the “irreversible mistake of making our rockets’ visit to the entire U.S. mainland inevitable all the more.”

The Trump administration is seeking to use increasing pressure from tightening economic sanctions, influence from China, and the threat of military action to force North Korea to negotiate denuclearization. “It is time for North Korea to realize that the denuclearization is its only acceptable future,” Trump declared in his address to the UN General Assembly. 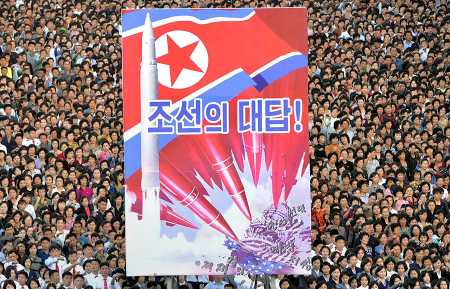 In recent years, diplomacy has not gained traction. U.S. President Barack Obama tried to use UN Security Council demands and sanctions to increase pressure on North Korea while waiting for Kim Jong Un to take steps toward denuclearization, a policy called “strategic patience.” The Obama administration’s insistence on onerous preconditions and misreading of North Korean signals in favor of talks, however, failed to produce results. (See ACT, March 2015.)

As a result, North Korea’s nuclear program raced ahead to produce additional nuclear material for warheads and increasingly powerful missiles. Now, under the Trump administration, North Korea is able for the first time to reach much of the U.S. mainland with its ballistic missiles, although the accuracy and reliability is questionable.

Since taking office, Trump has redoubled sanctions pressures and demanded China step up and said on Aug. 8 that the North would feel the “fire and fury” of the United States if the regime continued its threats and destabilized the Korean peninsula and East Asia. Kim responded with further missile tests and, on Sept. 3, North Korea claimed a hydrogen bomb test vastly more powerful than previous underground tests.

On the diplomatic front, Trump so far has been dismissive of the freeze-for-freeze proposal favored by China and Russia in which North Korea would suspend nuclear and ballistic missile tests and the United States would suspend more provocative elements of its large-scale joint military exercises with South Korea.

Trump may have narrowed his leverage further with his denunciations of the Iran nuclear deal, indicating that he may walk away from that accord and seek to impose new, tougher restrictions on Iran. That may signal to Kim that any deal, even if it is endorsed by the UN Security Council as the Iran deal is, may not be upheld by the United States, meaning that nuclear weapons are needed for regime security. James Clapper, former U.S. director of national intelligence, has said that he does not foresee a scenario in which North Korea relinquishes its nuclear weapons.

That would mean accepting negotiations focused on achieving some level of nuclear arms control and reduced tensions, coupled with U.S. nuclear deterrence policies. If so, Trump may have a choice between becoming the U.S. president who acquiesced to North Korea as a nuclear weapons power or as the U.S. president who went to war to prevent that outcome. Neither of the two U.S. defense treaty allies with the most at risk, South Korea and Japan, seem politically prepared for a serious military conflict with North Korea. —TERRY ATLAS AND KELSEY DAVENPORT