The Treaty on the Prohibition of Nuclear Weapons was adopted July 7 at the United Nations in New York, with 122 non-nuclear-weapon states voting in favor, Singapore abstaining, and the Netherlands voting against. The nuclear-armed states did not participate. (See ACT, July/August 2017.) 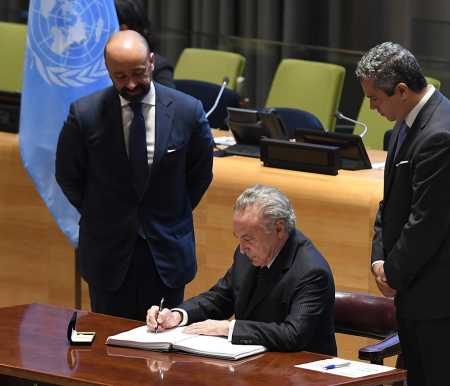 At the ceremony for the opening for signatures on Sept. 20, UN Secretary-General António Guterres heralded the treaty as a “milestone” and “the first multilateral disarmament treaty in two decades.”

Brazil was the first to sign, and Ecuador became the 50th signatory in the evening. By the end of the day, three signatories—Guyana, the Holy See, and Thailand—had also ratified it. The treaty enters into force once 50 states sign and ratify it. Three countries prominent during the treaty negotiations—the Marshall Islands, Sweden, and Switzerland—were among those absent from the list of initial signatories. (See ACT, September 2017.)

“We welcome the treaty as a long-awaited and essential step towards [nuclear weapons] elimination, and we do so foremost with the victims of these weapons in mind—those who died following the Hiroshima and Nagasaki bombings, after later nuclear testing, and those who still suffer today,” International Committee of the Red Cross President Peter Maurer declared at the ceremony. Beatrice Fihn, executive director of the International Campaign to Abolish Nuclear Weapons, emphasized the role of nuclear weapons survivors from Japan in pressing for the treaty.

Nuclear-armed states and NATO members strongly oppose the treaty. French Foreign Minister Jean-Yves Le Drian on Sept. 18 called the treaty “close to irresponsible” and said that it could undermine the nuclear Nonproliferation Treaty. U.S. Defense Secretary Jim Mattis warned Swedish Defense Minister Peter Hultqvist in a letter that signing the treaty could hurt U.S.-Swedish military cooperation and U.S. military support in the event of war, according to the Swedish newspaper Svenska Dagbladet.

NATO asserted in a Sept. 20 statement that the alliance could not support the treaty and discouraged other countries from doing so. “Seeking to ban nuclear weapons through a treaty that will not engage any state actually possessing nuclear weapons will not be effective, will not reduce nuclear arsenals, and will neither enhance any country’s security, nor international peace and stability,” according to the statement. “Indeed it risks doing the opposite by creating divisions and divergences at a time when a unified approach to proliferation and security threats is required more than ever.”

Still, speakers at the ceremony, including Fihn and Maurer, appealed to nuclear-armed states to join the prohibition treaty. Costa Rican President Luis Guillermo Solis urged them to “join this date with history.”

Calls to sign the treaty stretched beyond the UN complex in New York. On Sept. 20, two activists in Australia scaled the roof of a foreign ministry building in the capital, Canberra, and unfurled a banner urging their government to sign the nuclear ban treaty.

In response to division over the treaty, Guterres advocated “dialogue, bridge-building, and practical steps” to advance nuclear disarmament. Fihn, however, saw the division as a sign of progress, comparing the controversy to civil rights battles over the abolition of slavery and the women’s suffrage movement. “Ground-breaking steps forward do not start with consensus agreements,” she said.—ALICIA SANDERS-ZAKRE