Europeans leaders are seeking to shore up support for the Iran nuclear deal amid criticism from the United States over the duration of provisions that deny Iran the capability to make nuclear weapons or avoid detection if attempting to do so secretly.

With Iran judged to be in compliance, President Donald Trump and other U.S. officials have focused their criticism of the July 2015 nuclear accord on Iranian activities not barred by it, such as developing missiles and stoking conflicts in the Mideast, and on the deal’s provisions phasing out of some nuclear constraints imposed on Iran. Trump’s hints at abandoning the deal have alarmed key European allies, who have sought to reassure him with the uncertain prospect of addressing issues outside the agreement, while continuing the current deal. 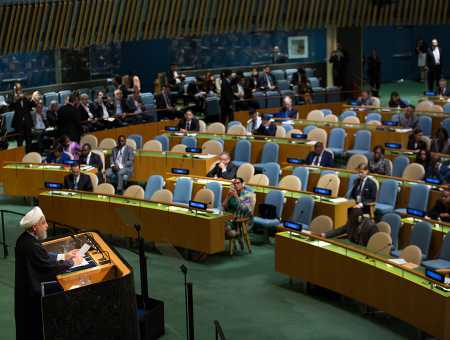 As with most arms control agreements, the nuclear deal negotiated between the P5+1 (China, France, Germany, Russia, the United Kingdom, and the United States) and Iran contains measures that expire over time. Other aspects that create barriers to building nuclear weapons remain in place indefinitely. European and Russian officials have pointed to the permanent provisions, said that the deal is contributing to regional and international security, and urged continued implementation of the agreement.

After a ministerial meeting of the P5+1 and Iran at the United Nations, Federica Mogherini, EU foreign policy chief and chair of the P5+1 group, said on Sept. 20 that all parties agreed there were “no violations” of the accord. Further, Mogherini said that there was no discussion at the meeting of reopening the agreement, signaling the kind of opposition Trump can expect from European allies.

The international community “cannot afford dismantling an agreement that is working,” and “as Europeans, we will make sure that the agreement stays,” she said.

Trump has signaled he will take steps this month that could lead to the unraveling of the nuclear deal. Addressing the UN General Assembly on Sept. 19, Trump denounced the deal as an “embarrassment” and said that Washington cannot abide by an agreement if it “provides cover for the eventual construction of a nuclear program.” Given that the nuclear deal allows Iran to maintain a limited nuclear program for peaceful purposes, it is likely Trump was referring to a nuclear weapons program.

U.S. Secretary of State Rex Tillerson spelled out the concern about expiration dates more clearly in remarks to the press Sept. 20. Tillerson said “the sunset clause” is a “very concerning shortcoming” of the deal. “One can almost set the countdown clock to when Iran can resume its nuclear weapons programs, its nuclear activities,” he said at a press conference, “and that’s something that the president simply finds unacceptable.”

Similarly, Israeli Prime Minister Benjamin Netanyahu also called into question the duration of the nuclear deal in his Sept. 19 speech, saying it is necessary to “fix it or nix it,” adding that fixing the deal included “getting rid of the sunset clause.”

Both Tillerson and Netanyahu were misleading in giving the impression that the deal expires with a single sunset clause, when the duration terms are complex and some provisions are intended to restrict Iranian actions permanently.

Several of the key limitations on uranium-enrichment activities phase out between 10 and 15 years after implementation of the accord, which occurred in January 2016. For instance, starting in January 2026, Iran is free to enrich uranium using advanced centrifuges and install and operate a greater number of first-generation IR-1 centrifuges. Currently, Iran is restricted to using 5,060 IR-1 machines to enrich uranium. In January 2031, the 300-kilogram limit on Iran’s stockpile of enriched uranium will expire, and Iran will be permitted to enrich uranium to levels greater than 3.67 percent uranium-235.

The expiration of these limits will shorten Iran’s potential breakout time, the time it would take to produce enough fissile material for a nuclear weapon, to less than the current 12 months. Yet, additional barriers remain in place—some will expire subsequently, others are permanent—that are intended to prevent or deter Iran from pursuing nuclear weapons.

For instance, continuous monitoring of Iran’s centrifuge production manufacturing sites and uranium mines and mills by International Atomic Energy Agency (IAEA) inspectors continue for an additional five and 10 years, respectively, providing intelligence on Iran’s actions. Other restrictions, such as the specific prohibition on “activities which could contribute to the design and development of a nuclear explosive device,” remain in place in perpetuity. This commitment prevents Iran from pursing activities in the future relevant to building a nuclear weapon but claiming the purpose was for conventional military applications.

Iran also committed under the nuclear deal to implement the modified Code 3.1 safeguards provisions, which require a state to report on a new nuclear-related facility as soon as the construction decision is made. Implementation of this measure will give the IAEA early notice of construction affecting Iran’s nuclear capabilities.

Taken together, these additional restrictions and transparency measures provide the international community with a powerful set of tools to detect and deter an Iranian attempt to pursue nuclear weapons development well beyond the initial 15-year period now at issue. Further, Mogherini noted that the text of the deal “reaffirms that under no circumstances will Iran ever seek, develop, or acquire any nuclear weapons.”

European members of the P5+1 and Iran, while clearly stating that the current nuclear deal must remain in place, have not dismissed future negotiations on Iran’s nuclear programs or other activities in the region. Iran has made clear that any future negotiations would require reciprocal concessions.

French President Emmanuel Macron said he agreed with Trump that the deal is “not sufficient,” but said that stopping the deal would be a bad option. He said the best way to address concerns is to sustain the nuclear deal and work to build on the existing deal.

The deal does not preclude negotiating an extension to the limits or a deal on other measures that would provide disincentives to the pursuit of nuclear weapons by Iran in the future. “Different issues can be discussed in different formats,” said Mogherini.

Iranian Foreign Minister Mohammad Javad Zarif told The New York Times on Sept. 21 that if “you want to have an addendum, there has to be an addendum on everything.”—KELSEY DAVENPORT