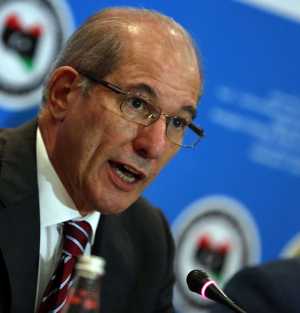 This year marks the 20th anniversary of the entry into force of the Chemical Weapons Convention and the founding of the Organisation for the Prohibition of Chemical Weapons (OPCW). Today, the convention remains the foundation of the international community’s commitment to eliminate the scourge of chemical weapons.

Impressive progress has been made in 20 years. More than 95 percent of 72,000 tons of declared chemical warfare agents have been destroyed under the OPCW’s verification. The Russian Federation will complete the destruction of its stockpile before the end of this year and the United States by 2023.

In parallel to our achievements, we have faced formidable challenges. In 2013, the OPCW began an unprecedented mission to remove Syria’s chemical weapons. With the support of the United Nations, the European Union, and more than 30 states-parties, 1,300 metric tons of chemical weapons material were removed from Syria and destroyed. This was an impressive achievement.

Unfortunately, that did not mark the end of our work in Syria. Amid persistent and credible allegations that chlorine was being used as a chemical weapon, I established a fact-finding mission in April 2014 that has examined a significant number of incidents and substantiated several cases of the use of toxic chemicals as weapons, an incident involving sarin, and another involving sulfur mustard. This behavior flies in the face of every civilized norm and is in direct violation of the convention.

Moving forward, our success should not be measured strictly in weapons destroyed but also in weapons prevented from being built.

One thing that is very clear: the challenges of tomorrow will be very different from those of yesterday. The continued use of chemical weapons, the mounting threat of chemical terrorism, and the evolution of science and technology are all shaping our future.

The threat of chemical terrorism is a real concern and one that cannot be easily addressed with current approaches to nonproliferation. Countering this threat will require action on many fronts using all available tools, including multilateral coordination and legislative means.

We take this threat seriously. Our Open-Ended Working Group on Terrorism is tasked with identifying opportunities for enhanced interaction and coordination with relevant international bodies. A sub-working group focuses particular attention on the problem of nonstate actors. We also have an active partnership with the UN Counter-Terrorism Implementation Task Force, which helps us and more than a dozen other international organizations practice and coordinate responses to biological and chemical weapons threats. Together with the International Atomic Energy Agency, the OPCW co-chairs the working group on preventing and responding to weapons of mass destruction terrorist attacks with chemical or biological weapons. On the legal front, ensuring that all our states-parties have effective legal and other regulatory measures in place and supporting internal structures to administer them are critical. These provide the foundation for preventing nonstate actors from gaining access to materials that could aid the development of chemical weapons.

Advances in science and technology will be one of the drivers shaping our future as we all work to ensure that such developments are only for the benefit of humankind. This makes it necessary for us to have the ability to detect new chemicals and establish if they are relevant to the convention. Similarly, we need to acquire a deeper understanding of the growing interaction between chemistry and biology, which also gives rise to the ability to produce potentially dangerous chemicals through new techniques and methods. Advancements in chemistry cannot, of course, be constrained. But it is imperative to monitor them closely to utilize them for improving verification and protection measures.

In a world that sometimes finds it difficult to reach a common ground on crucial issues, the convention and the work of the OPCW demonstrate what can be achieved if we remain steadfast in supporting global norms for the common good.