Legislation that could undermine the 1987 Intermediate-Range Nuclear Forces (INF) Treaty moved closer to becoming law Sept. 18, when the U.S. Senate passed its defense authorization bill for fiscal year 2018. The bill includes a provision that would establish a program to begin development of a missile system that could violate the treaty. 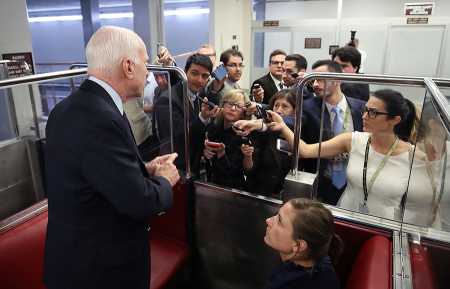 The Senate measure provides $65 million for a nuclear-capable, road-mobile ground-launched cruise missile (GLCM) with a range prohibited by the treaty. The House passed its version of the bill July 14, which authorizes spending $25 million for a non-nuclear intermediate-range GLCM, a system that would also violate the treaty. Further, the House bill would require the president to submit a report on Russian INF Treaty compliance within 15 months of enactment and would prohibit funding for an extension of the 2010 New Strategic Arms Reduction Treaty (New START) if Russia continues to violate the INF Treaty.

The INF Treaty required Russia and the United States to eliminate permanently their nuclear and conventional ground-launched ballistic and cruise missiles with ranges of 500 to 5,500 kilometers. The treaty does not prohibit activities related to research and development of this category of weapons.

Since 2014, Washington has accused Moscow of violating its commitment “not to possess, produce, or flight-test” a GLCM having a range prohibited under the INF Treaty. In the past year, the Pentagon has alleged that Russia is fielding a noncompliant system, which Moscow denies.

In an effort to increase pressure on Russia in light of the alleged violation, Sen. Tom Cotton (R-Ark.) and Rep. Mike Rogers (R-Ala.) proposed legislation in February to authorize funds for developing a GLCM system with a prohibited range. These measures provided much of the text for the section in the authorization bills on the treaty.

Sen. Ed Markey (D-Mass.) filed an amendment that would authorize funds for R&D, test, and evaluation of military capabilities to counter Russian violations of the treaty but remove the specific reference to a GLCM from the bill’s funding table.

Sen. Elizabeth Warren (D-Mass.) offered two amendments to modify the INF Treaty provision. One would “prohibit the use of funds for actions not permitted” under the treaty, such as developing and testing a new GLCM.

Warren filed a second, bipartisan amendment co-sponsored by Sen. Mike Lee (R-Utah) to require “a report on the military and security ramifications” of the new Russian GLCM. The report also would have mandated an assessment of the willingness of NATO and allies in Europe to “host a ground-launched intermediate-range missile with a range of between 500 and 5,500 kilometers” and “whether such a missile is the preferred military response” to Russian treaty violations before funds could be authorized to develop such a system.

In a press release, Warren said the United States “cannot risk a new round of nuclear escalation without seriously studying the potential impacts of developing these dangerous weapons.” She criticized the Republican initiative in the underlying bill that “would cost American taxpayers millions of dollars, while laying the groundwork for our withdrawal from a vital treaty that has ensured global security for three decades.”

Lee said the proposed amendment would “set the precedent that the U.S. should not immediately react to an adversary’s treaty violation by violating the same treaty ourselves. That’s not how working in good faith in the international community is done.”

The three amendments were among the vast majority of amendments not debated or voted on in the Senate due to a stalemate over four controversial proposals to the authorization bill.

The Senate version of the defense bill passed with bipartisan support by a vote of 89–8. It will go to a conference committee to reconcile differences between the House and Senate versions and then to the White House, where President Donald Trump is expected to sign it into law.

Although the Sept. 7 White House Statement of Administration Policy on the Senate bill “objects” to the INF Treaty-related provisions as too prescriptive, it nevertheless states that the Trump administration would support R&D on such prohibited missile systems.

Asked about the ramifications of the Senate vote, Kremlin spokesman Dmitry Peskov said on Sept. 19, “We need to understand what it means and analyze that information. Russia maintains its commitment to all international agreements.”

The INF Treaty marked the first time the United States and the Soviet Union had agreed to reduce their nuclear arsenals, eliminate an entire category of nuclear weapons, and conduct extensive on-site verification inspections. As a result, the two countries destroyed a total of 2,692 short-, medium-, and intermediate-range missiles by the treaty’s implementation deadline of June 1, 1991.

Arms control experts warn that U.S. pursuit of a new GLCM could alienate European allies anxious about a prospective new nuclear arms race affecting their terrorities. Thomas Graham Jr., who was President Bill Clinton’s special representative for arms control, nonproliferation, and disarmament, warned recently in The National Interest that developing a noncompliant missile system could “release all limits on Moscow’s intermediate-range nuclear forces that have strengthened U.S. and allied security for three decades.”