At an emergency UN Security Council briefing on Sept. 4 following North Korea's sixth and largest nuclear test explosion, Nikki Haley, U.S. ambassador to the United Nations, lectured Pyongyang's leaders that "being a nuclear power is not about using those terrible weapons to threaten others. Nuclear powers understand their responsibilities."

Days later, in his inaugural address to the UN General Assembly on Sept. 19, U.S. President Donald Trump called North Korea's leader "rocket man" on "a suicide mission." Trump warned, "We will have no choice but to totally destroy North Korea" if it threatens U.S. allies in the region. North Korea's foreign minister replied by saying Trump's insult makes "our rockets' visit to the entire U.S. mainland inevitable all the more."

As two of the world's most irresponsible nuclear actors traded nuclear threats, the leaders of the world's non-nuclear-weapon states took an important, responsible step in the opposite direction. On Sept. 20, the new Treaty on the Prohibition of Nuclear Weapons opened for signature, with 50 states signing on the first day. 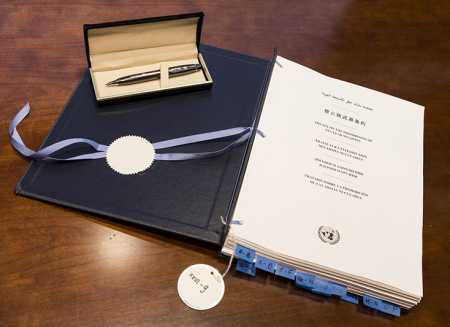 The treaty, which was negotiated by more than 130 states, is a good faith effort to meet their responsibility as signatories of the nuclear Nonproliferation Treaty (NPT) to pursue effective measures on disarmament and help end the arms race. The prohibition treaty further reinforces the commitments of these states against the use, threat of use, development, production, manufacture, acquisition, possession, stockpiling, transfer, stationing, or installation of nuclear weapons. It reinforces states' commitments to the NPT and the Comprehensive Test Ban Treaty (CTBT).

Although the prohibition treaty by itself will not eliminate any nuclear weapons, the treaty can help to further delegitimize nuclear weapons and strengthen the legal and political norm against their use. Steps aimed at reducing the risk of catastrophic nuclear weapons use are necessary and should be welcomed, especially as the war of words between Trump and Kim Jong Un escalates.

Unfortunately, the United States and the world's other major nuclear weapons actors have continued to criticize and belittle the effort as "a distraction" that undermines more effective nuclear disarmament and nonproliferation measures. Instead of further deepening the growing divide between nuclear-armed states and the non-nuclear-weapon-state majority, U.S. officials should consider using more conciliatory language and tactics.

With the prohibition treaty now a reality, its supporters, skeptics, and opponents must put aside their disagreements and find new and creative ways to work together to strengthen the nuclear disarmament and nonproliferation regime.

Just as importantly, the Trump administration must get its own nuclear policy act together. Trading insults with North Korea's leader and threatening to pull out of the 2015 Iran nuclear deal do not constitute effective disarmament and nonproliferation measures. Team Trump also needs to get behind initiatives that help meet unfulfilled U.S. NPT-related disarmament responsibilities. Failure to do so may not only undermine long-term support and confidence in the U.S. leadership role, but the NPT itself.

To start, President Trump should refrain from making further nuclear threats and reaffirm the 1985 statement by U.S. President Ronald Reagan and Soviet leader Mikhail Gorbachev that "a nuclear war cannot be won and must never be fought." He should agree to extend the New Strategic Arms Reduction Treaty and its verification provisions by five years, to 2026, which would ease tensions, reduce fears of a new nuclear arms race, and help reduce the skyrocketing cost of nuclear weapons.

The administration should also reject congressional pressure to build new nuclear weapons in response to Russia's deployment of ground-based cruise missiles prohibited by the 1987 Intermediate-Range Nuclear Forces Treaty. Russia's missile deployments are a problem but do not significantly alter the military balance, and the treaty's Special Verification Commission should be reconvened to resolve the dispute.

The Trump administration should also reaffirm the U.S. commitment to the CTBT. For more than two decades, the United States has led global efforts to verifiably halt nuclear testing. The United States and China have signed, but not yet ratified, the treaty, thus blocking its entry into force. U.S. and Chinese leaders, in concert with the heads of other states that have detonated nuclear explosions, should reaffirm support for the CTBT through a joint declaration before the 50th anniversary of the NPT in 2018.

Supporters of the prohibition treaty have a responsibility too. They must push the United States, China, and Russia to agree to adopt concrete disarmament measures. Treaty supporters could also help reduce tensions over North Korea by issuing a joint call for Washington and Pyongyang to cease making nuclear threats and push the UN secretary-general to convene emergency diplomatic talks.

The prohibition treaty is a reality. Responsible international leaders and actors now must put aside their disagreements and find new and creative ways to come together to prevent nuclear catastrophe.