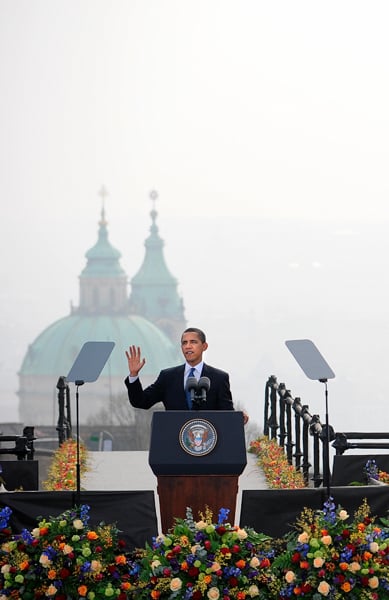 Seven and a half years later, the UN General Assembly is poised to convene in early 2017 global negotiations on a treaty prohibiting nuclear weapons, a measure the Obama administration firmly rejects as impractical, even dangerous by undercutting nuclear deterrence. Soon, Obama will turn over to incoming President Donald Trump—a man he previously called unfit to be commander in chief—the launch codes for a nuclear arsenal that is only slightly smaller than the one he inherited eight years ago.

These are starkly contrasting bookends to the Obama era, a period that produced a mixed, mostly disappointing record on nuclear disarmament and nonproliferation. Although there were laudable achievements, notably the Iran nuclear deal and efforts to safeguard nuclear materials from terrorists, there were failures that will present very difficult challenges to his successor, including North Korea’s advances in nuclear warhead and missile development and the breakdown in talks with Russia to reduce the world’s two largest nuclear arsenals. In sum, there was little movement toward that world without nuclear weapons, with the United States and Russia armed with a combined total of about 9,000 nuclear warheads, plus another 5,000 retired but not yet dismantled.2

As Obama took office in 2009, the threat of nuclear terrorism far overshadowed the possibility of nuclear war between Russia and the United States. In March 2009, U.S. Secretary of State Hillary Clinton and her Russian counterpart, Sergey Lavrov, symbolically pressed a “reset” button to mark a joint effort to improve relations that had suffered from the 2008 Russian military intervention in Georgia. Russia joined the United States in condemning North Korea’s second nuclear test in May 2009 and supported Obama’s planned nuclear security summit process. Obama and then-Russian President Dmitry Medvedev signed on April 8, 2010, the New Strategic Arms Reduction Treaty (New START), which mandates a modest reduction in nuclear forces by 2018.

Iran announced in February 2009 that it successfully carried out its first satellite launch, raising international concerns that its ballistic missile potential was growing. Construction of Iran’s second, secret uranium-enrichment facility in the mountains near the holy city of Qom was discovered in September 2009.3 Preventing Iran from becoming a nuclear power became one of the most pressing nuclear challenges facing a new president.

On September 24, 2009, Obama chaired the UN Security Council summit on nuclear nonproliferation and nuclear disarmament. The council unanimously adopted U.S.-sponsored Resolution 1887 calling for a world without nuclear weapons. In May 2010, a successful review of the nuclear Nonproliferation Treaty (NPT) was held at the United Nations that resulted in a consensus action plan to strengthen compliance with the treaty.

Today, the world looks quite different. The threat of nuclear war between the United States and Russia or China, by mistake or miscalculation, has increased due to a general deterioration of relations and regional tensions over eastern Europe, Ukraine, Syria, and the South and East China seas. Russia dropped out of the nuclear security summit process in 2016, and Moscow and Washington have exchanged charges of violating the 1987 Intermediate-Range Nuclear Forces Treaty, which eliminated an entire class of nuclear weapons.

The 2015 NPT Review Conference failed to produce a consensus document as the political divide widened between states that possess nuclear weapons and those that do not. Further, North Korea conducted its fifth nuclear test on September 9, 2016, and announced that it now had a nuclear warhead that could be mounted to ballistic missiles.4

The Obama administration has implemented reductions in the number of U.S. nuclear warheads. The number of New START-accountable deployed warheads are limited by the treaty to 1,550 as of February 2018, down from 1,800 shortly after the accord went into force in February 2011.5

Yet, the numerical reductions in the total U.S. stockpile, a more meaningful measure, are smaller than any other post-Cold War presidency. Shortly before Obama assumed office, the United States had about 5,273 nuclear warheads in its active stockpile. Since then, the number has been cut to 4,571 as of September 30, 2015,6 a reduction of 702, or 13 percent. His predecessor, President George W. Bush, reduced warheads by 5,304, or 50 percent; President Bill Clinton cut warheads by 3,182, or 23 percent; and President George H.W. Bush had reductions of 9,497, or 41 percent.7 Contrary to his 2009 vision of a world free of nuclear weapons, Obama has initiated the largest re-investment in the modernization of U.S. nuclear forces since President Ronald Reagan, a program some independent analysts project will cost as much as $1 trillion over 30 years to upgrade and maintain these systems.8

The single brightest spot on Obama’s nuclear record is the progress toward ensuring that Iran’s nuclear program remains devoted exclusively to nonmilitary purposes. The Joint Comprehensive Plan of Action concluded in October 2015 imposed tough, verifiable restrictions on Iran’s nuclear program for more than a decade and set up barriers to Iran getting a nuclear weapon indefinitely. The International Atomic Energy Agency monitors Iran’s compliance with the accord. In exchange for compliance, the agreement relieves Iran from U.S., EU, and UN Security Council nuclear-related economic sanctions.9

The Iran agreement is a landmark achievement because it has the potential for a long-term resolution of the issue of Iran’s efforts to acquire nuclear weapons. This threat to the United States and its friends and allies, especially Israel, was severe enough that military action was considered to destroy Iran’s nuclear infrastructure. Now, with the election of Trump, this major foreign policy achievement faces an uncertain future. Trump has said his “No. 1 priority is to dismantle the disastrous deal.”10

Did Obama’s failure to achieve more of what became known as the “Prague agenda” indicate that the agenda itself was ill conceived or that his efforts to implement it were flawed? Various observers and historians will answer this question differently.

Most of the elements of the Prague agenda enjoyed strong support across several post-Cold War administrations and from both major political parties. Those elements include reducing the sizes of nuclear arsenals, opposing the proliferation of nuclear weapons to additional countries, strengthening the security of nuclear weapons and materials to prevent their seizure or sabotage by hostile actors, and stopping illegal trade in nuclear materials and technology. This agenda continues to be seen as strongly in the national security interest of the United States and its allies. It was pursued by Democrat Clinton and by the two Bush presidents, both Republican, and likely will be pursued in some manner by the Trump administration and its successors. Obama did not err in seeking these objectives.

Three other elements of Obama’s nuclear agenda were more controversial. These include efforts to ratify the Comprehensive Test Ban Treaty (CTBT), to reduce the role of nuclear weapons in U.S. military strategy, and to seek the eventual elimination of nuclear weapons. Sufficient votes for Senate approval of the CTBT could not be found over the last eight years, and absent an effort by Trump to overcome Republican opposition, it is unlikely that the treaty will enter into force during his administration. Opponents believe that the United States must not be prevented from conducting underground nuclear test explosions if necessary to demonstrate the reliability of warheads in the U.S. stockpile.

The Obama administration could not muster domestic interagency and allied consensus needed to achieve either of those objectives. For example, the 2010 NPR Report stated, “The United States is not prepared at the present time to adopt a universal policy that deterring nuclear attack is the sole purpose of nuclear weapons.” In 2016 it was widely reported that the secretaries of defense, state, and energy opposed adoption of a nuclear no-first-use doctrine, and the president declined to make this change in policy.12

The Obama administration also could not gather the political support to make further reductions to U.S. nuclear forces beyond those required by New START. This was in spite of the fact that the U.S. Department of Defense determined in its 2013 Nuclear Employment Guidance review that “the security of the United States and our allies and partners can be ensured while safely pursuing up to a one-third reduction in deployed strategic nuclear weapons from the level established” in New START.13

These failures in large part can be attributed to a more assertive Russia, which has refused to be a partner in reducing the dangers of nuclear weapons. Russia is midway through a major modernization of its nuclear forces. It has objected to NATO enlargement and U.S. missile defenses in Europe. Russia’s 2014 invasion of Ukraine made any measure unilaterally to reduce U.S. nuclear forces or even its stated reliance on nuclear weapons politically impossible. In a similar manner, China’s continued modernization and gradual enlargement of its comparatively small nuclear arsenal and its island building in the South China Sea spike any U.S. moves to de-emphasize its nuclear might.

The deterioration of relations with Russia and China cannot be blamed on Obama’s administration, which made heroic efforts to engage both nations in strategic dialogue and tension reduction. Russia, in particular, has re-emphasized the role that its nuclear weapons might play in a European conflict and has conducted a series of exercises and deployments that feature the simulated use of nuclear weapons.

Trump will inherit the nuclear weapons issues that challenged the Obama presidency. He has not clearly indicated what stance he will take toward the role of nuclear weapons in U.S. policy nor whether he believes that the country should work toward their elimination. Meanwhile, the influence from the campaign to negotiate a treaty banning nuclear weapons, new Catholic teachings on nuclear weapons, and the expanding grassroots Global Zero campaign is poised to grow and advance. Whatever policies the Trump administration pursues will face a growing movement spurred in part by the visionary path that Obama set out in Prague.

2.   Arms Control Association, “Nuclear Weapons: Who Has What at a Glance,” October 2016, https://www.armscontrol.org/factsheets/Nuclearweaponswhohaswhat.