– General John Shalikashvili
former Chairman of the Joint Chiefs of Staff
Nuclear Materials: Summits Made Some Headway on Security

When Russian troops intervened in Crimea in 2014 and sparked a crisis over Ukraine, global tensions spiked. Thanks to the nuclear security summit process initiated by President Barack Obama, there was at least one worry that no longer troubled White House officials: the presence of highly enriched uranium (HEU) in Ukraine that might have given leaders in Kiev a nuclear weapons option.

Since the breakup of the Soviet Union, the United States had been seeking to remove 234 kilograms of HEU, enough for several weapons, from Ukraine’s former Soviet research reactors. Yet, nearly two decades of efforts had failed to break through political obstacles in Kiev. When Washington conditioned Ukraine’s participation in the nuclear security summits on taking action, the final hurdles came down. The last HEU was transferred from Ukraine to Russia, where it was due to be down-blended into low-enriched uranium, by the time of the second nuclear security summit, held in 2012 in Seoul. 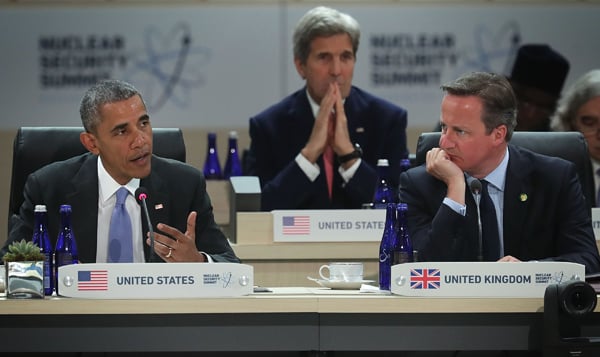 The Ukraine case offers a vivid example of the gains of the summits, the venue for the president’s most significant nuclear materials control accomplishments and an outgrowth of his 2009 Prague speech putting forward nonproliferation goals that included organizing international efforts to secure vulnerable nuclear material.

The summits successfully leveraged the desire of foreign leaders for good relations with Obama and the United States to break down some long-standing political barriers to nuclear security. In addition to Ukraine, more than a dozen other countries have given up HEU since the summit process began. In addition, other measures to improve nuclear security cooperation advanced. Most notably, shortly after the summit process wrapped up this year, an important amendment to the Convention on the Physical Protection of Nuclear Materials (CPPNM) finally entered into force. It requires states-parties to take steps to protect nuclear facilities and materials on their territory. This was buttressed at the 2014 summit in The Hague by a joint commitment by some three dozen states to have in place regulations that are at least as good as the detailed voluntary International Atomic Energy Agency (IAEA) guidance and to invite the IAEA to review these regulations.

Still, the format and nature of the summit process, which brought together countries to make mostly voluntary commitments, failed to repair many of the long-standing weaknesses in global nuclear security. Despite meetings involving more than 50 world leaders, the legal regime remains quite weak in its rigor and in the materials to which it applies. For example, the summit focused on civilian materials although more than 80 percent of weapons-usable uranium and plutonium are in noncivilian hands.

Furthermore, radiological materials, which are highly vulnerable to terrorists’ theft because of their wide use in hospitals, industry, and universities, received short shrift and are not covered under even weak legal measures like the CPPNM. Those materials could be used to make a “dirty bomb” that at a minimum would cause panic and perhaps large economic losses. In addition, because of the power of reprocessing industries in countries such as France, the summits did not even attempt to tackle the growing stockpiles of civil-sector separated plutonium.

The summit process also did not fully succeed in building sufficient institutional mechanisms to sustain its gains. The formal attempt at doing so was a series of five vague action plans ostensibly aimed at pushing countries to help institutions such as the IAEA and the Global Initiative to Combat Nuclear Terrorism to hold exercises and other practical actions but committing them to do very little. More hopefully, some of the summit countries have formed a contact group aimed at sustaining progress in these forums; and additional countries, most notably China and India, have signed up to the 2014 commitment on the IAEA guidance on nuclear security. Making these a success will require President Donald Trump to spend political capital to sustain and extend Obama’s initiatives.

Miles Pomper is a senior fellow at the James Martin Center for Nonproliferation Studies and a former editor-in-chief of Arms Control Today.