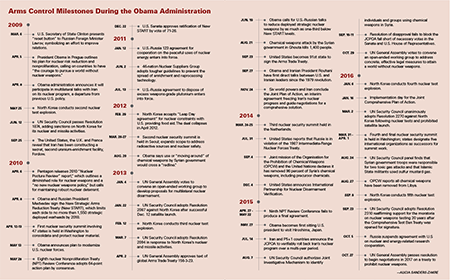 April 5: President Obama in Prague outlines his plan for nuclear risk reduction and nonproliferation, calling on countries to have “the courage to pursue a world without nuclear weapons.”

April 8: Obama administration announces it will participate in multilateral talks with Iran on its nuclear program, a departure from previous U.S. policy.

September 25: The United States, the U.K. and France reveal that Iran has been constructing a secret, second uranium-enrichment facility, Fordow.

April 8: Obama and Russian President Medvedev sign the New Strategic Arms Reduction Treaty (New START), which limits each side to no more than 1,550 strategic deployed warheads by 2018.

January 12: U.S.-Russia 123 agreement for cooperation on the peaceful uses of nuclear energy enters into force.

August 20: Obama says use or “moving around” of chemical weapons by Syrian government would cross a “redline.”

June 19: Obama calls for U.S.-Russian talks to reduce deployed strategic nuclear weapons by as much as one-third below New START levels.

September 27: Obama and Iranian President Rouhani have first direct talks between U.S. and Iranian leaders since the 1979 revolution.

July 31: United States reports that Russia is in violation of the 1987 Intermediate-Range Nuclear Forces Treaty.

September 4: Joint mission of the Organisation for the Prohibition of Chemical Weapons (OPCW) and the United Nations declares it has removed 96 percent of Syria’s chemical weapons, including precursor chemicals.

July 14: Iran and P5+1 countries announce the JCPOA to verifiably roll back Iran’s nuclear program over a multi-year period.

September 10-11: Resolution of disapproval fails to block the JCPOA fall short of necessary votes in the Senate and U.S. House of Representatives.

January 16: Implementation day for the Joint Comprehensive Plan of Action.

August 27: OPCW reports all chemical weapons have been removed from Libya.