By Daniel Horner and Kelsey Davenport 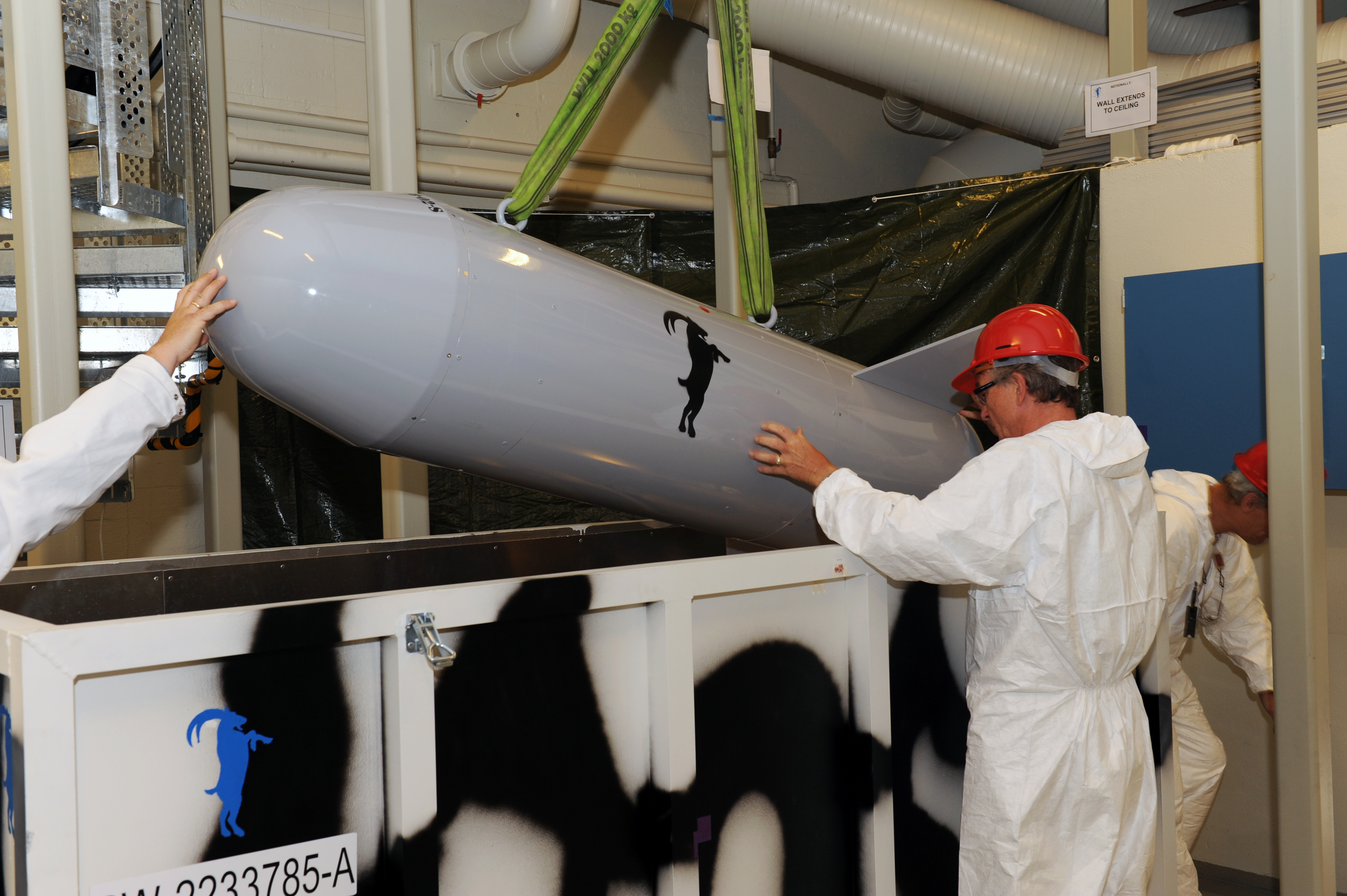 An initiative involving more than two dozen countries has put in place its working groups and has begun its effort to bolster international capabilities for verifying future arms control agreements, officials from the United States and non-nuclear-weapon states said in interviews and email exchanges over the past few months.

Rose Gottemoeller, U.S. undersecretary of state for arms control and international security, launched the International Partnership for Nuclear Disarmament Verification in a speech in Prague in December 2014, calling it a “nontraditional partnership” to “better understand the technical problems of verifying nuclear disarmament and to develop solutions.”

Since then, the partnership has held a kickoff meeting last March in Washington and a plenary meeting in November in Oslo, where it formed three working groups. The groups, which deal with monitoring and verification, on-site inspections, and current and future verification technologies, met in Geneva last month.

Rose said the idea for the partnership came from a 2014 study of verification issues by the private Nuclear Threat Initiative (NTI). The study drove home the point that an array of countries, not just the ones with nuclear weapons, would have to work to improve international verification capacity to be prepared for future nuclear arms control agreements, Rose said. That led to a collaboration between the State Department and the NTI, he said.

Andrew Bieniawski, NTI vice president for material security and minimization, participated in the Dec. 10 interview and emphasized that the partnership is an “action-driven, deliverables-driven, results-driven initiative,” pointing to the detailed requirements in the terms of reference for the three working groups.

Rose said the partnership’s work is “all going to be done at the unclassified level” and that the goal is to publish the key documents online.

Like Rose and Bieniawski, working group chairs and other participants cited the interaction between nuclear- and non-nuclear-weapon states as an important element of the partnership. In a Feb. 3 email, Robert Floyd of Australia, director-general of the Australian Safeguards and Non-proliferation Office and co-chair of the on-site inspections working group, said, “Nuclear weapon possessor states need to be part of [verification] work, but I don’t think they have a monopoly on good ideas or [are] the only group of states to want confidence in the verification.” 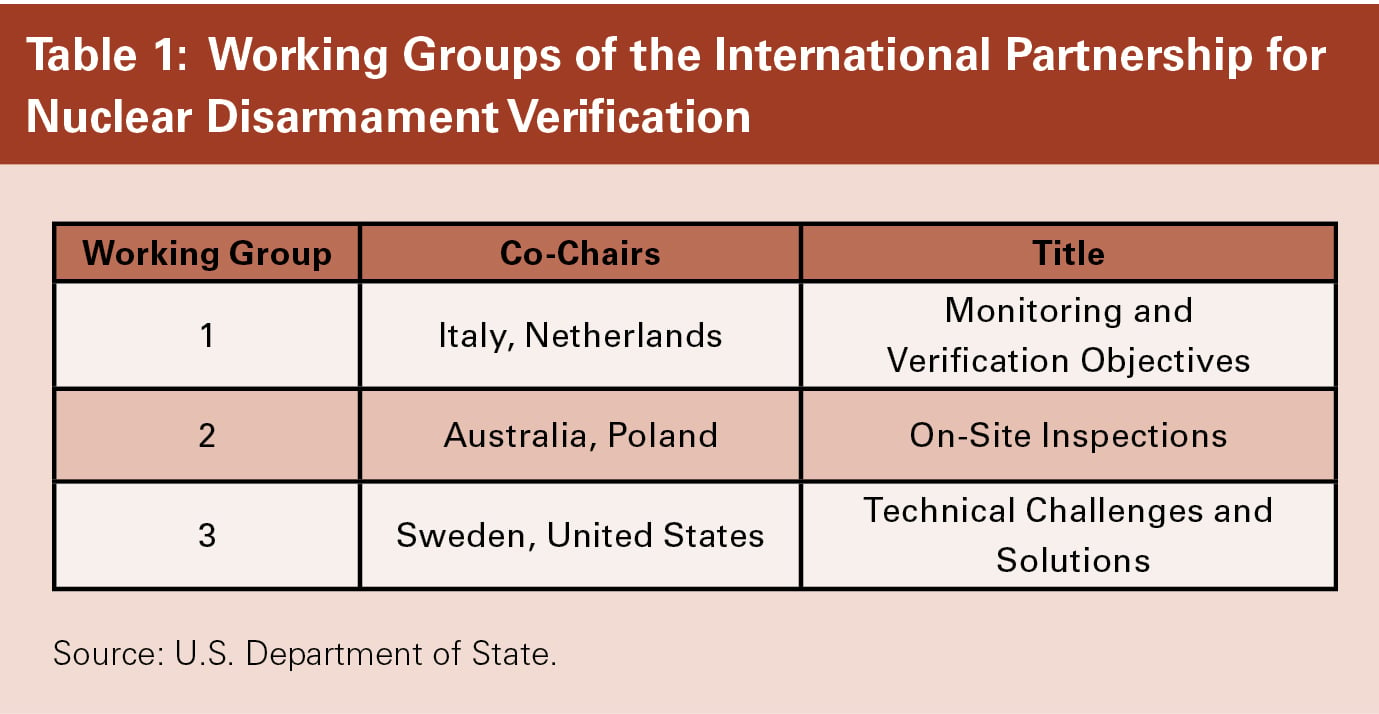 In a Feb. 4 interview, Kurt Siemon, director for nuclear verification in the U.S. National Nuclear Security Administration and co-chair of the working group on technical issues, said the approach would be to “listen to the views of everyone in the room” rather than asking participants to “pick and choose from a menu” that the United States has produced.

María Antonieta Jáquez, deputy director-general for disarmament in the Mexican Ministry for Foreign Affairs, said in a Feb. 16 email that the partnership “has provided a very good space” for dialogue between nuclear- and non-nuclear-weapon states. That, she said, “is very welcome” amid the widespread “frustration with the lack of progress in nuclear disarmament” by the nuclear-weapon states and the resulting “very divided” discussions on that subject.

Preparing for the Future

A central challenge for the partnership is that its mission is to develop technologies that will meet the needs of future agreements that are hypothetical.

Jens Wirstam of Sweden, deputy research director of the Swedish Defense Research Agency and co-chair of the working group on technical issues, said in a Feb. 2 email that the problem is not insurmountable because some elements of verification will be “indifferent to the specifics” of any future agreement. For example, he said, any verification system will have to be able to confirm that an inspected item is one that is limited by the relevant treaty rather than being a mere mock-up. He also cited the need to maintain a chain of custody. Beyond elements such as those, he said he hoped the partnership would create “a set of different building blocks…that could be assembled differently in different contexts.”

In the interview, Bieniawski said the “whole life cycle” of a warhead is within the scope of the partnership but that the partners had agreed that the focus for the first 18 to 24 months would be on the nuclear warhead dismantlement process and the monitored storage of the resulting nuclear materials.

In their email correspondence, the members of key delegations gave varying degrees of weight to the technical and policy components of the undertaking.

In his Jan. 29 email, Col. Marek Sobótka of Poland, co-chair of the group on on-site inspections, highlighted the interplay between the two aspects. The partnership is a technical exercise in that it is directed toward “finding practical ways for cooperation” between nuclear- and non-nuclear-weapon states to create a set of tools that is “ready to use” in designing and verifying “a new future nuclear disarmament treaty,” wrote Sobótka, head of the nonproliferation and disarmament policy division in Poland’s defense ministry. But he said that if the results of the partnership’s work are “properly presented,” they “will prove to the broad international community how complex and difficult” it will be to achieve the goal of nuclear disarmament.

Floyd, Sobótka’s co-chair, summarized the relationship between the two elements by saying, “The tasks of the working groups definitely have a technical focus, but verification must be framed with political objectives in mind.”

Wirstam said that, from his standpoint as co-chair of the group on technical issues, “this is a technical exercise, and in a sense[,] a bottom-up approach where we have the answers to the technical questions” and then “policy catches up.” In that way, he said, “there is a parallel to the earlier process leading up to the [Comprehensive Test Ban Treaty], where work on the technical issues was done over an extended period of time before the political conditions matured.”

A question underlying much of the partnership’s work is how to carry out useful sharing that does not touch on sensitive information.

In a Jan. 27 email to Arms Control Today, Piet de Klerk, ambassador at large for the Netherlands and co-chair of the monitoring and verification working group, said the ability of the group to navigate classification issues “is the crux of the matter.” A key question, he said, is, “What can you show to outsiders…so that they can draw credible conclusions about disarmament steps without violati[ng] classification rules?” As he noted, under the nuclear Nonproliferation Treaty (NPT), the nuclear-weapon states are prohibited from sharing information with non-nuclear-weapon states about making nuclear weapons.

One of the goals of the working group dealing with on-site inspections is to identify “[w]ays in which verification objectives can be achieved notwithstanding limitations related to safety, security, national interests and non-proliferation inherent in the operations of different types of military, nuclear, and explosive facilities, including through the application of managed access.”

“Managed access” refers to a practice in which the inspecting party and the inspected party negotiate the extent of the inspectors’ access to sensitive areas.

In his Feb. 3 email, Floyd said, “Good managed access rules can go a long way toward resolving differences over inspector access in the field, but a critical balance between inspection intrusiveness and protection of national interests will have to be struck during future negotiations on treaty instruments.”

The international partnership is going to build on the UK-Norwegian initiative, but go “much deeper,” Bieniawski said.

Asked about the members of the partnership, a State Department spokesman said in a email exchange last month that, in addition to the five countries that the NPT recognizes as nuclear-weapon states—China, France, Russia, the UK, and the United States—Australia, Belgium, Brazil, Canada, Chile, Finland, Germany, Italy, Japan, Jordan, Kazakhstan, Mexico, the Netherlands, Norway, Poland, South Korea, Sweden, Switzerland, Turkey, the United Arab Emirates, the Vatican, and the European Union have “attended the various activities” of the partnership.

Some of the sources interviewed for this article indicated that China and Russia, at least officially, have hung back from full participation in some of the activities.

South Africa, which built nuclear weapons and then, in the late 1980s and early 1990s, dismantled them and joined the NPT as a non-nuclear-weapon state, is not a member. The State Department spokesman said, “South Africa’s technical expertise and its own disarmament record would make it a valued addition” to the effort.

Rose said the focus for the initial membership was countries that had expressed an interest in verification and could provide technical expertise. Some of the invited countries did not accept, he said.

He said that, at the partnership’s plenary meeting last November, the countries did not come to agreement on the issue of membership expansion but agreed to discuss it at the next plenary, scheduled for June in Tokyo.

The officials interviewed differed on the importance of expanding the membership. Some argued for inclusion of the non-NPT nuclear-armed states and greater representation of Africa, Asia, and Latin America. Some said there was no need to expand the partnership in the immediate future. Sobótka said that a “smaller number of participants will inevitably result in obtaining relatively quick progress in developing a solid foundation” for the partnership, “which should further increase its attractiveness to potential new members in future.”

Note: After this article was posted online, the State Department released information indicating that the Tokyo plenary will take place in June. The article has been updated to reflect that information.